Some of the most dramatic scenes from last weekend’s neo-Nazi rally in Charlottesville — images of white extremists beating a black man in a parking lot — were captured by photographer Zach Roberts who talked with Dennis J Bernstein. 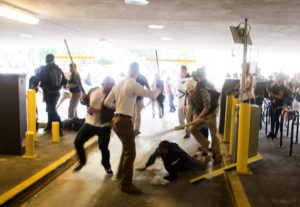 While many images of neo-Nazi violence from last Saturday’s riots in Charlottesville, Virginia, have gone viral around the world, the photographs taken by Zach Roberts, a fellow at GregPalast.com, are particularly shocking in their documentation of the brutal beating of a young black special-education teacher in a parking garage about 50 feet from where police park their patrol cars.

At one point during the beating, one of the neo-Nazis pulled out what appeared to be a Glock 9 and brandished it, threatening Roberts and others who came rushing on the scene to rescue their friend from being beaten to death.

Dennis Bernstein: Thanks for joining us, Zach Roberts. Where were you Saturday as the white supremacists began to expand out over the city? You took some photography that might mean a lot to law enforcement if they planned to file charges in this case.

Zach Roberts: After the breakdown of the rally in Emancipation Park, formerly known as Lee Park, the marchers started to take to the streets around 11:30. I ended up following them as they marched down Market Street. There were people on the sidewalks with signs saying “You’re not welcome here,” “Charlottesville is against white supremacy,” and so on. 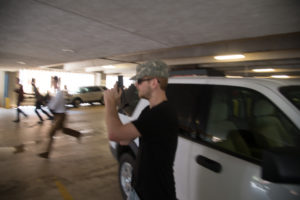 A white supremacist brandishes a gun at a group of African-Americans who arrived to help their friend after he was beaten by white supremacists in Charlottesville, Virginia, on August 12, 2017. (Copyright Zach Roberts/GregPalast.com – reproduced with permission)

The white supremacists were yelling back racial slurs. Some of them were geared up with one-inch thick wooden dowels, with Confederate and Nazi-esque flags, helmets on, gas masks around their necks.

They were tooled up for violence. So when you hear people saying that this wasn’t supposed to be a violent rally, I’m sorry, but you don’t show up for a peaceful rally wearing combat gear. They were expecting violence and they got it, because they caused it.

A friend of mine, a female photographer named Stephanie Keith, was deeply affected by the sexist comments directed at her. She covered Standing Rock and other difficult assignments but I have never seen her affected that way.

DB: Tell us in detail about the beating that you witnessed.

ZR: We were marching down a commercial/residential street, small businesses along the way, almost everything closed down because they expected bad things to happen. I was walking alongside one of the more combat-ready groups of marchers.

As we got closer to the parking garage, all I saw was a young black man running and about a dozen white supremacists chasing after him with long poles and clubs. Someone with a shield pushed him into a parking arm. That broke and the young black man fell to the ground and was unconscious. They started beating him with their clubs, they picked up the parking arm

and started hitting him with that.

This went on for about thirty seconds. They scattered when some of the African American man’s friends showed up. His friends picked him up and helped him walk to the garage staircase. He was bleeding profusely from the head and knees and an elbow where he fell. As I was walking to the staircase, I saw that one of the supremacists was pointing a gun at us. 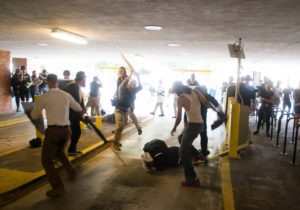 A single African-American police officer finally showed up. This is thirty feet away from the police station. The police actually keep a lot of their cars in this same parking garage. Five minutes later, an ambulance still hadn’t shown up. When more officers showed up about ten minutes later, all they did was stop journalists from taking photographs of the beaten man.

An ambulance finally did appear and took the man to a hospital. He had multiple stitches and a broken wrist. I’m sure people online are trying to come up with justifications for why this man was beaten. By the way, he is an assistant special education teacher in the local school system.

DB: It seems to me that the people who attacked him need some special education. Or maybe they have already been specially educated.

ZR: Yes, by people like Richard Spencer and other white supremacists.

DB: In various instances, the police seemed to turn a blind eye. There were plenty of cops around, except when violence broke out and then they seemed to disappear. The same thing happened when the car ran into the crowd. There was plenty of room for this car to come out of this blind alley and then even drive away before he was finally stopped. It really does seem that the police were somehow complicit in what was going on.

ZR: My understanding is that the police were basically issued a stand-down order to allow the protest to happen. Don’t arrest people unless they are doing something that is endangering lives. Keep everyone safe but don’t try to confront.

But in this case the police seemed to refuse to do anything at all. They seemed to consciously put themselves in places where nothing was happening. A colleague of mine fell and had a gash in her head. I waited beside her for ten minutes and none of the police officers called an ambulance. 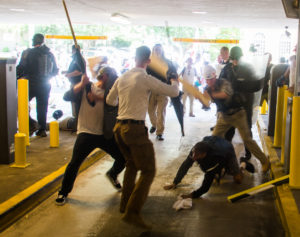 DB: I saw on one of the cable stations a white guy pushing a cop in SWAT gear and nothing happened to him. Can you imagine somebody from Black Lives Matter shoving into a group of cops in riot gear and not being taken down?

ZR: When I cover protests, I purposely wear a polo shirt and khakis and try to look like the whitest guy in the room so I don’t get harassed by the police in any way. In this case it was easier to blend in with the white supremacists and they were comfortable talking to me. Some of them were complaining about the police, saying “Look, they let Black Lives Matter march down the middle of the street.” Well, if members of Black Lives Matter had AR-15’s and were marching with full combat gear, something tells me it would be a different scene.

DB: We saw that in the Sixties with the Panthers when they decided to exercise their Second Amendment rights. They were slaughtered.

43 comments for “Photographing a White-Supremacist Attack”