With Israel and Saudi Arabia still lusting for war with Iran, President Trump and his disdain for reality about the Iranian nuclear accord have become the key enablers, as ex-CIA analyst Paul R. Pillar explains.

Donald Trump’s disdain for the truth does not prevent reality from repeatedly bumping up against his policies, the most consistent theme of which has been to try to destroy his predecessor’s accomplishments. The degree to which reality inconveniences Trump — and more importantly, how much Trump’s efforts to shove reality aside damage U.S. interests — vary from issue to issue.

President Donald Trump poses for photos with ceremonial swordsmen on his arrival to Murabba Palace, as the guest of Saudi King Salman, May 20, 2017, in Riyadh, Saudi Arabia. (Official White House Photo by Shealah Craighead)

Dominating the headlines recently, of course, has been health care, in which the denied truths include basic principles of how insurance pools work and the fact that the Affordable Care Act (ACA) has successfully extended health care coverage to many Americans who did not previously have it.  In foreign policy, one of the most glaring rejections of truth has concerned climate change and Trump’s associated withdrawal from the Paris agreement, which represents rejection of a well-established scientific consensus.

Trump appears to care little about the resulting near-term consequence of U.S. isolation and loss of leadership. The most cataclysmic physical and economic consequences are longer-term ones that will mostly occur after Trump leaves office, and there is no evidence that he cares about those consequences at all.

As for what was probably Barack Obama’s leading foreign policy accomplishment — the agreement, known as the Joint Comprehensive Plan of Action (JCPOA), to restrict Iran’s nuclear program — the reality that Trump rejects is that the accord is working as intended to prevent an Iranian nuclear weapon and that Iran is complying with its obligations under the agreement, as verified by inspectors of the International Atomic Energy Agency.

Trump faces every 90 days a congressionally imposed requirement for the president to certify whether Iran is observing the agreement. The certification is supposed to be a statement of fact, not an expression of a preference. For a truth-denier like Trump, who has been vituperative in denouncing the agreement, this requirement is a problem. The account in the New York Times of White House discussions leading to the most recent certification of Iranian compliance (the second of Trump’s presidency) indicates that Trump’s advisers had to drag him kicking and screaming into making the certification.

Notwithstanding (or perhaps because of) the JCPOA’s success, Trump clearly is still determined to try to destroy the accord. With his failure on the domestic side to undo Obamacare, he is probably more determined than ever to achieve destruction of this foreign policy accomplishment. 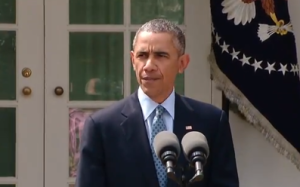 The Times’s account leaves the impression that when the next certification is due three months from now, there is a significant chance that Trump will refuse to acknowledge the truth a third time, no matter how rigorously the Iranians observe the agreement. A failure to certify would open the door to new sanctions that would represent wholesale U.S. violation of the JCPOA.

Meanwhile, the Trump White House already has violated not only the spirit but the letter of the JCPOA by openly and explicitly discouraging other countries, as it did at the G-20 summit meeting, from conducting normal business with Iran. The Iranians have not yet given up on the agreement in response, but as Iranian foreign minister Mohammad Javad Zarif has indicated, Iran’s patience, like anyone’s patience, is not unlimited.

For Trump and others who want to confront and isolate Iran and who all along have opposed the JCPOA or anything like it, the preferred scenario is for the Iranians to get so annoyed by U.S. noncompliance that Tehran finally does give up and declares the agreement void.

If that tactic fails, then do not be surprised if, in October, Trump refuses certification. That decision would be accompanied by trumped-up charges of Iranian violations. Anyone willing to examine the issue carefully would know they are trumped-up because, thanks to the highly intrusive monitoring regime that the JCPOA established, international inspectors have very detailed and timely cognizance of everything going on in the Iranian nuclear program.

Of course, readily available refutation has not stopped Trump from lying about many other things. But if Iranian conduct regarding the JCPOA to date continues over the next three months, then the world should realize that a Trumpian accusation of Iranian noncompliance would have as much validity as Trump’s statements about the size of his inauguration crowd or the millions of fraudulent voters who supposedly cast ballots for Hillary Clinton.

If Trump rejects the truth about Iranian compliance, the most favorable possible outcome would be for Iran and the other five non-U.S. powers that negotiated the JCPOA to try to continue the agreement despite U.S. noncompliance. Even that outcome would have significant negative consequences for the United States in the form of lost business in Iran, lost opportunities to build on the JCPOA in addressing other regional problems, and further isolation of the United States and estrangement from its allies.

Less favorable outcomes would involve complete breakdown of the JCPOA and an accelerated Iranian nuclear program, with renewed concern about diminishing breakout time until a possible Iranian nuclear weapon, increased uncertainty about the Iranian program in the absence of the enhanced international inspections established under the JCPOA, and heightened danger of U.S. involvement in a new Middle Eastern war.

How much would Donald Trump, motivated by whatever psychological and political factors drive him along his path of destruction, care about any such consequences? The experience with health care gives us some indication. To realize the campaign mantra of abolishing Obamacare, Trump evidently is willing to remove health-care coverage from millions of Americans, many of whom voted for him.

One way he has been dealing with the truth he denies is to try to create a new reality by saying “let” [sic] the ACA fail while he actively sabotages the program, such as by refusing to enforce the individual mandate and sowing as much uncertainty as possible to discourage insurance companies’ participation.

Such a man is not likely to care much about setting back the cause of nuclear nonproliferation or stoking increased dangers and tensions in the Middle East, if that means getting a big notch in his achievement-destroying belt.

58 comments for “The Dream to Destroy Iran-Nuke Accord”