Before visiting many key U.S. allies, including either Mexico or Canada, President Trump traveled to Poland last week, getting a friendly reception from another nationalist politician, President Andrzej Duda, reports Dennis J Bernstein.

Perhaps the most overlooked part of President Donald Trump’s trip to Europe last week was his 18-hour visit to Poland as the guest of political ally and fellow nationalist, President Andrzej Duda. 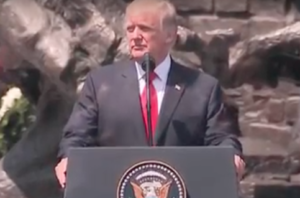 I interviewed Ronald Cox, a professor in the Department of Politics and International Relations at Florida International University, about the significance of Trump’s decision to make an early visit to Poland. Cox is author or editor of numerous books including Corporate Power and Globalization in US Foreign Policy. I spoke to Cox on July 6.

Dennis Bernstein: Why did Trump go to Poland? What’s your overview? And then let’s talk about what we understand might have happened.

Ronald Cox: Trump is essentially continuing in Poland what he’s already doing in the United States. He’s extending militarization, and support for those countries that are thoroughly militarizing their economy, as well as political parties that are in favor of unleashing a further militarization and policing of the domestic population, which Trump approves of, not only at home but in a country like Poland.

DB: Say a little bit more about that, doing the same thing there as he’s doing here? Give us a few more details on that.

RC: Okay, so the first two aspects of Trump’s speech are worthy of note. The first aspect is the support for Poland’s increased military spending toward NATO. Poland has been one of five countries that have surpassed a 2% threshold, that Trump was urging all NATO member countries to pass regarding 2% of military spending… 2% of GDP. So Trump celebrated that aspect.

The second aspect that Trump celebrated was this particular attitude of a political party — the Law and Justice Party in Poland — which is engaged in a militarization campaign, a policing campaign inside Poland that has strong consequences domestically. Because one of its targets is Muslims. And one of the targets is what is labelled Islamic Extremists, but oftentimes with a broad brush is simply painted – the Muslim population. So there’s been increased harassment of Muslims, increased attacks against Muslims that have been, essentially, endorsed by this government.

And it’s a mistake to consider the Law and Justice Party a new development in Poland. They’ve actually been a dominant opposition party for some time. They were previously in a position of power, in Poland. So they have a lengthy history that coincides nicely with what the Polish state has done over the past 15 years, which essentially is to implement a set of neo-liberal policies which includes privatization, which includes deregulation.

In fact, aspects of their program are quite compatible with what is typically labelled neo-liberal economic policy, even though they’re often referred to as a far-right, nationalist party. But in this case, nationalism is being geared towards supporting a further emboldening of the private sector, a further emboldening of the security forces, the police and the military, as a way to protect a defined population in Poland.

So, in that sense, Trump in his speech was directly, sort of, calling forth this clash of civilizations narrative. Which, I think, feeds into his administration’s support for far-right regimes.

DB: And it did appear, at least it appeared that he had strong support from the folks on the street. That these were very strong and powerful supporters of the government of Poland and of Trump, in this context. Would that be a proper perception?

Logo of Poland’s Prawo i Sprawiedliwo?? party, translated as Law and Justice. (Wikipedia)

RC: Yes, except I would qualify it in the following sense. What helped catapult this party to power is the fact that the neo-liberal policies have come with a growing problem in Poland, as elsewhere. You have a massive gap between rich and poor. You have one-fifth of the country which is in poverty. And this is particularly true in the eastern part of the country. So you see workers there, you see small farmers there who gravitated towards the Law and Justice Party because, frankly, there’s no left alternative in Poland.

So the Law and Justice Party was able to drive a wedge between popular frustration at not having a better social page, or better access to welfare, that we protect them from declining income, and declining access to good jobs, and anger at the state itself. So, they’re redirecting that anger towards immigrant populations, in particular the Muslim population.

DB: And there would be, in the context of the forced migrations coming out of the wars in the Middle East, where Poland is much more on the front line. And they’ve had a rather militant response, wouldn’t you say?

RC: Exactly. Poland has announced, this is not just a Law and Justice Party but this is other major parties in Poland, have announced that they’re simply not going to accept the European Union’s stipulation that countries take in a certain percentage of refugees, corresponding to their population and their status. Poland has basically said “We’re not going to do it.” They’re not the only country that has taken that position. Certainly Hungary took a very strong position. They also are led now by a far-right government.

DB: And how have they actually treated… it’s been pretty violent treatment of the refugees….

DB: …those fleeing war. Could you talk about that?

RC: Yeah. Sure. So, what you have in Poland is, and this is not only the tacit, but the rather open and blatant acceptance by the dominant political parties in Poland, in targeting refugees immigrants, you know, quite openly, as enemies of civilization. The term civilization that Trump invoked is broadly used to suggest, “Well, we are at war with people different than ourselves.” It’s interesting how the Law and Justice Party if you read them carefully, they actually deny that they’re nationalists. They say “No, nationalism is not a good thing.” They don’t have the leaders in the party on record as saying this.

And I think if we’re going to translate what they’ve been saying into a sort of larger framework for what they believe, they really do believe, “Well, it’s not strictly a nationalist Poland that is reacting against foreign threats, but it’s a broader sort of Catholic Church Christianity which embodies a certain set of values, that are reacting against threats that are different.”

DB: Trump is supposedly going to sit down with Putin during the G20 meetings. How would you say Putin and the Russians would evaluate Trump’s policy and stance towards Poland? How would that work?

RC: One of the interesting developments that took place just today [July 6], just about 12 hours ago, as a matter of fact, is that Trump officially approved the sale of a Patriot Missile System to Poland. Which indicates Trump’s close ties to our own military industrial complex, and essentially a continuity of a policy that the Obama administration had already started. The Obama administration had already facilitated the delivery of the beginnings of a kind of defense missile system in Poland. So Trump is essentially continuing and expanding upon that policy.

So, that brings me to Putin, because Putin is not happy about that. He’s already indicated that he’s unhappy about this sale. He was unhappy about the expansion of NATO, obviously, to the Russian border. Which in my view, he has every right to be unhappy, because the expansion of NATO is very much an unprovoked expansion. In fact, it was the West that actually expanded NATO before Russia did really much of anything. Trump actually mentioned what Russia is doing in the Ukraine, which fits into a dominant sort of establishment narrative. 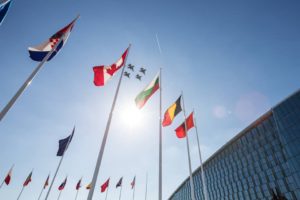 Jets flyover NATO Headquarters, where NATO members gathered for a meeting on May 25, 2017, in Brussels. (Official White House Photo by Shealah Craighead)

DB: And Trump is a… you would say a real strong representative in this context of corporate power in American foreign policy, and military policy?

RC: Yes, I think that’s definitely true. If you look at his campaign, the single biggest benefactor for Trump at a key moment, strategically, in his campaign, when his campaign was really threatening to sort of go off the edge, so to speak, was Robert Mercer, who is a well-known Libertarian multi-billionaire who made his money on the hedge fund circuit.

And this guy, basically, has a radical idea about deconstructing not only the United States government, but deconstructing, as Steve Bannon also puts it, other governments. And participating in a broad sort of alliance with the far-right. Which I think Mercer sees as complementary to wealth accumulation. Because wealth accumulation, from this perspective, comes through stripping the states of assets that are public assets, selling those off to the private sector. Which, of course, the government in Poland certainly endorses this despite their, sort of, nationalist label.

DB: So, I guess you can bet that in one way or another, Putin is going to raise these issues in this meeting with Trump? Or at least hint at what’s in it for the Russians versus this stance.

RC: Exactly. I think Putin certainly liked the fact, it’s been pretty well documented, that Putin hoped that Trump would come into power within the U.S. presidency. But he may have gotten a bit more than he bargained for, in terms of the continuity of U.S. policy.

However, what he also got, which I think he was also counting on, is someone who’s terribly inexperienced, who is not simply a president in the mold of previous presidents, but one who really doesn’t seem to have the first clue about how the office actually operates: how to conduct foreign affairs, or how to read signals from foreign leaders, or how to conduct diplomacy. So, all of these things have to be taught to Trump.

And, basically, from what we’ve seen so far, people are not having much success controlling him and controlling his impulses that brought him to such trouble in certain aspects of the campaign despite the fact that he won the election. So, I think Putin and Trump meeting together is going to be interesting to see.

Trump has been more heavily scripted on recent foreign trips. The Poland speech was effective by his standards, to the extent that he didn’t make any gaffes. And he read from a speech that was very scripted and very polished. So I suspect that we’ll see that same kind of script in his meeting with Putin.

25 comments for “Behind Trump’s Trip to Poland”