The Trump administration’s emerging Arab-Israeli policy focuses on Saudi Arabia and Israel with little concern for the Palestinians, who continue to protest for their rights, including a recent prison hunger strike, reports Dennis J Bernstein.

On April 17, about 1,500 Palestinian prisoners in Israeli jails launched a hunger strike that lasted well over a month, demanding basic human rights — an end to the denial of family visits, proper medical care and treatment, access to higher education, and an end to solitary confinement, administrative detention, and imprisonment without charge or trial.

Israel continued to ignore prisoner demands while intensifying their abuse and collective punishment. According to the human rights group, Addameer, “Over the past five decades well over 800,000 Palestinians have been imprisoned or detained by Israel, equivalent to about 40% of the total Palestinian territories male population.”

Today about 6,500 people are still imprisoned, including some holding world records for the longest periods in detention of political prisoners. In the words of Palestinian hunger strike leader Marwan Barghouti, “Rights are not bestowed by an oppressor. Freedom and dignity are universal rights that are inherent in humanity, to be enjoyed by every nation, and all human beings. Palestinians will not be an exception. Only ending occupation will end this injustice and mark the birth of peace.”

Dennis Bernstein: I understand you just met with representatives for congresswoman Barbara Lee. Tell us about the meeting. What was the purpose.

Arab Barghouti: I handed them a letter from me personally to the congresswoman, Barbara Lee. We are trying get attention of the American officials, of the American Congress, of any influential political high profile people who can help us raise the awareness and put some pressure on the Israeli government on this issue. The hunger strike has been going for long now.

DB: Tell us more about the the strike and the strikers, led by your father.

DB: Fifteen years. How old are you?

DB: You’re 26, so your dad has been in prison most of your life.

AB: Yeah, more than half of my life.

DB: Did you see him arrested?

AB: I actually still remember when I was a little kid, 11 years old, the Israeli soldiers came to our house, took over the house, and put the Israeli flag on our balcony, put me with my two siblings and my mother in one bedroom. And we used to ask for permission to go to the kitchen to eat, or to go the bathroom. At that time the Israeli military was…

DB: Did they arrest your dad at that point?

DB: They occupied your house.

AB: Yeah, they were looking for him. They brutally ask me “Where is your father?” As if I’m going to be lying. I was just a little kid who didn’t understand anything. After they left a few days, they stayed a few days in our house. After a few weeks I was looking at the television with my family and I saw, maybe, the worst moment of my life, I saw my father surrounded with Israeli soldiers, and it was really tough for me. I started crying and I didn’t know, I didn’t even understand that it’s going to take him that long – like we’re talking about 15 years. And my whole life hasn’t been with my father. He’s a respected political leader and maybe the most popular Palestinian leader in Palestine.

DB: So, you grew up, when you had the chance, looking at him through the bars in prison?

DB: You haven’t touched your father in 15 years.

AB: Yes, even to shake his hand. I’m not allowed to, and they give me permission to go see him once every two years. I haven’t seen my father in two years.

DB: You haven’t seen him. You get once every two years.

AB: That’s it. And when I go to visit him, the journey takes me 20 hours and then I can barely have 45 minutes with him. I talk to him on the telephone where I can barely hear his voice. It’s frustrating, and it’s a humiliation not only for the prisoners, but also for all the families of the prisoners.

DB: And I wouldn’t be lying would I, if I said the story you’re sharing with us represents the story of hundreds of thousands of Palestinians? Here’s a recent statement from your dad after 15 years behind bars: “Rights are not bestowed by an oppressor. Freedom and dignity are universal rights that are inherent in humanity, to be enjoyed by every nation, and all human beings. Palestinians will not be an exception. Only ending occupation will end this injustice and mark the birth of peace.” I want to talk about the current situation, and just a little bit more about your dad–his intellectual background and what the family, the Barghouti family, has been up to for the past seven generations.

AB: The Barghouti families is one of the biggest families in Palestine. We have more than 20,000 people around the world, not only in Palestine. Because we all know that a lot of Palestinians are refugees, and were kicked out of their country and their homes back in 1948, and back in 1967. My father has been resisting the Israeli occupation for more than four decades. He has been in prison before, more than six years. He was excised from Palestine, kicked out seven years. But at the same time he is a Palestinian parliament member, elected twice.

AB: Yeah, and he is currently a parliament member. He is also, he is a well educated man. He took his PhD in political science from Cairo University. He is very well recognized locally and internationally.

And when we say internationally, we are talking about icons like Nelson Mandela, himself, who supported publicly, my father and his release. My father’s nickname is the Palestinian Mandela.

He is recognized from hundreds of parliamentarians around the world. The European Parliament voted for the release of Marwan Barghouti. Cities in France, Italy, South Africa, and all over the world gave him the honorary citizenship. This gives you the idea that when the Israeli government says a terrorist, about him, and about all the 6,500 Palestinian political prisoners, it doesn’t mean anything because he is supported by people who have been through this struggle and know the oppression very well.

DB: And, clearly, they should be able to tell by the way in which his son represents him, something about who this man is. And, I just have to ask you one more detail. I hope you don’t think this is silly. But you are named Arab Barghouti. How did he choose that, because I guess it’s like you’re representing all the Arabs, is this it?

AB: Yeah. It’s like funny. Because when I signed up to Facebook they told me Arab is a nation so I had to put two A’s at the start, to change my name. Even back home it’s not a common name. It’s like a

DB: No, I understand. Yeah, that’s why I’m asking you.

AB: Yeah, exactly. My father believes in the Arabic nationality. He believes also in honor. My brother’s name is called Sharaf which means honor in Arabic. And also it’s one of his principles that he lived on, the Arabic culture. And I really like it. Like people get shocked when they hear my name, but I like it.

DB: Alright, Arab, I’ve got another question for you, now let’s getting back to the front line. So, please take a long moment, and describe the current conditions now that all prisoners, that these 1,500?…you say are on a hunger strike?

DB: And all the others, I guess that includes children?

AB: No. Because my father and the leadership of the prisoners stopped them, even though they wanted to take place. It’s 1,500 Palestinian political prisoners between the age of 18 and 65. We have a lot of

leaders in there. Ahmad Sardar happens to be one of them, Bashir Shaheed. Also Mr. Karim [Yunis], who is spending the 35th year of his life in Israeli prisons.

AB: Yes, it’s the longest political prisoner in the modern history. Mr. Karim said, in risking his life, “Even if we unfortunately have to die for this, it’s our right and rights are to be taken with our stomachs.” And my father said a hunger strike is the most peaceful way to protest against the injustice that has been practiced against him and his fellow prisoners.

And they are taking this battle… when you look at it, they’re not asking for a lot. They are asking for family visitation, they are asking for the end of  administrative detention which is holding prisoners for years without even visiting the trial court, without even being charged. Better health conditions. We have a lot of Palestinian sick prisoners. We have 19 with cancer. And they are not being treated humanely. We are talking about the end of solitary confinement. My father spent in the solitary confinement cell more than three years.

AB: This is inhumane. This is immoral. And they have been trying and trying to talk to the Israeli prison authority without even… they didn’t even answer them. So they had to take a step, and they did the hunger strike. Unfortunately, and sadly in this world that we live in 2017, we have 1,500 Palestinian prisoners asking for their very basic human rights. I ask everyone, especially the American people, to raise their voice against the injustice, not only in Palestine, but everywhere else. 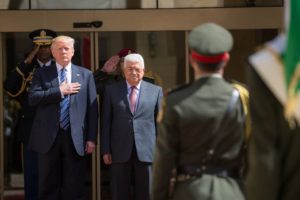 President Donald Trump participates in arrival ceremonies with President Mahmoud Abbas of the Palestinian Authority at the Presidential Palace, May 23, 2017, in Bethlehem. (Official White House Photo by Shealah Craighead)

DB: It’s been my observation that when it comes to Palestine, the corporate press does not do a good job. This story is virtually non-existent, you must know. You follow the headlines. Trump was with Mahmoud Abbas. Trump is talking about the peace partners there. I’m wondering what do you think the strikers think about this–that visit? Did Trump make any effort to find out about torture, about the strike, about the suffering that’s going on?

DB: And, again, you haven’t seen him for two years.

AB: I haven’t seen him for two years. And he was prevented… this hunger strike, from day one until now, from seeing anyone except once in the 28th day he saw his lawyer and… can you imagine after 4 weeks, you saw him once, and he told him like, how he was being tortured, and how they put him in a cell that barely could fit his body. It was super dirty. And he had to stop drinking water until they moved him to another cell. And when they moved him, they put noise and lights in his face so he can’t even sleep, and they fabricated videos about him eating, and they are being cheap and silly as always.

← The Criminal ‘Laws’ of Counterinsurgency
How America Armed Terrorists in Syria →