For the first time in 30 years, Iran fired missiles from its territory — in a strike against ISIS in Syria, putting down a marker that Iran won’t tolerate more terror attacks against Tehran, Patrick Henningsen explained at 21st Century Wire.

On June 19, Iran’s Revolutionary Guard announced that it had fired several missiles at ISIS positions in the Deir Az Zor province in Syria. The reason given for this unprecedented military strike was retaliation for double terrorist attacks which struck Tehran two weeks ago. Readers should not underestimate the significance of this event. 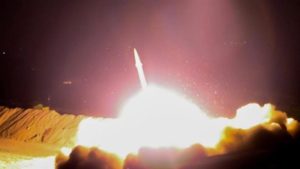 Iranian photo showing a missile launched by the Revolutionary Guard Corps in the west of Iran, targeting an ISIS position near the city of Deir Az Zor in Syria.

According to a statement issued by the news agency for the Iranian Revolutionary Guard Corps, Sepahnews, “Multiple medium-range missiles were fired from the Iranian provinces of Kermanshah and Kurdestan, and a large number of terrorists were killed and their weapons were destroyed.”

Regarding the alleged ISIS attack, which killed 13 people and wounded 50 others, the Revolutionary Guard added, “The spilling of any pure blood will not go unanswered.”

Make no mistake about it – this was a major media event. It’s been 30 years since Iran has fired missiles at targets outside of its own borders. Iranian television featured images of the IRGC missiles being launched at night.

The IRGC has also warned that more missile strikes will follow should ISIS militants plot any future attacks on Iran. “If they carry out a specific action to violate our security, definitely there will be more launches, with intensified strength,” said General Ramazan Sharif of the IRGC (also cited by AP).

Fars News Agency added, “The IRGC warns the Takfiri terrorists and their regional and trans-regional supporters that they would be engulfed by its revolutionary wrath and flames of the fire of its revenge in case they repeat any such devilish and dirty move in future.”

This latest move by Iran is worrying for a number of reasons. Justified or not, Iran’s launch from its western provinces, over Iraqi airspace and into Syria will most certainly heighten tensions in an already tense Syrian theatre. If the situation escalates, the question of who has the upper hand may not matter should the situation descend into all-out war involving the U.S.

Iran’s missile strike took place on June 18, targeting an ISIS command center located near the embattled city of Deir Az Zor, a key choke point on the road to the ISIS-held city Raqqa in northeastern Syria. This area is currently a hive of international military activity featuring a host of players – the Syrian Army, Russia, Iran, Lebanese Hezbollah militia and opposing U.S., U.K., Australia, France, Turkish and German forces positioned alongside numerous U.S.-allied (and paid for) militias like the Kurdish SDF, YPG militias – all presumably camped in the region to “defeat ISIS.”

Add to this the problem of U.S. having repeatedly attacked Syrian military forces in a manner that has aided the strategic advances of ISIS. Following from this point, it should be well-known by now, based on successive U.S. aggressions inside Syria, that the Pentagon is probing both Syrian and Russian defenses, testing their level of patience, perhaps in the hope that either Syria or Russia might retaliate against a U.S. aircraft or U.S. support positions on the ground.

In the event that the U.S. loses a single aircraft, or loses one member of its combat team to the hands of a Syrian or Russian military asset, then Washington will no doubt seize on this event as an “act of aggression,” initiate its media machine to begin consensus-building internationally, ramping-up military operations on par with Iraq in 2003. This would be the excuse that the U.S.-led Coalition has been needing in order to blow the Syrian theatre open into a wide regional or possibly, world-wide war.

The missile strike by Iran could be a mid-term game changer in the sense that it places Iran squarely into the frame of fighting international terrorism, and ISIS. Up until this point, parties in the U.S. led by the neoconservative right, the Trump White House, and the sister lobbies of Israel and Saudi Arabia – have tried hard to enforce a strict party line that Iran is somehow, “The number one state sponsor of terror on the planet,” despite the fact that no evidence is ever presented to back-up this sensational geopolitical plank.

One of the main beneficiaries of this talking point is the Kingdom of Saudi Arabia, which gains on two fronts; the “Iranian terror” line deflects from Saudi Arabia’s own sordid role in supporting and funding armed militants, terrorist groups (including active factions in Syria) and radical mosques worldwide. This dovetails well with the Trump Administration’s current embrace of Saudi Arabia as an ally in the “War on Terror” and the simultaneous casting-out of Gulf state Qatar from the U.S.-led Coalition’s inner circle in Middle East military and diplomatic affairs.

President Donald Trump poses for photos with ceremonial swordsmen on his arrival to Murabba Palace, as the guest of King Salman of Saudi Arabia, May 20, 2017, in Riyadh, Saudi Arabia. (Official White House Photo by Shealah Craighead)

But that has provoked counter-moves. This week, Turkish troops were deployed to Qatar in a show of support for Qatar by Ankara. This is just another signal that the geopolitics of the region and around Syria, is getting more complicated by the day.

However, Washington and Riyadh’s efforts to bracket Qatar with “state sponsor of terror” Iran will be even more difficult following the twin-terror attacks against Tehran and Sunday’s retaliatory missile strike. For this reason, the IRGC believes that Saudi and the U.S. are linked to the Tehran attacks.

The FT explains: “However a statement from the Revolutionary Guards linked the ‘brutal attack’ [on Tehran] to Donald Trump’s visit last month to Riyadh, where the US president singled out Iran for fuelling ‘the fires of sectarian conflict and terror’.

“‘This terrorist act took place a week after a joint meeting between the US president and head of a reactionary regional country [Saudi Arabia] which has been a constant supporter of terrorism,’ the statement said. ‘The fact Isis claimed responsibility proves that they [Saudi Arabia] were involved in the brutal attack.’”

Despite all of this, Trump has placed all his chips on Saudi Arabia as Washington’s only major Arab partner in the region. Does Washington really think Saudi Arabia is of high moral standing in the region? You can blame the Saudi decline in popularity for a number of reasons – supporting Wahhabi extremism, beheading Shia clerics, or Saudi’s ability to buy their seat at the head of the United Nations Human Rights Committee, or cynically acquiring the U.N. Women’s Rights chair. Perhaps Washington is over-estimating Saudi Arabia’s position in the Middle East.

Tehran Attack: Who Did It?

Another interesting but under-reported component of this story has to do with the reason for Iran’s missile retaliation. Although ISIS apparently claimed credit for the Tehran attacks on June 6, other evidence suggests that another well-known international terrorist entity might have been involved.

Journalist James Foley shortly before he was executed by an Islamic State operative in 2014.

After events in Tehran, the U.S.-backed regime change terrorist proxy, the MEK (Mojahedin-e Khalq) was named by senior Iranian politician Mr. Hamid-Reza Taraghi, as a partner in the terrorist attacks. This theory gains a bit more credence following a statement from former member of the MEK, Massoud Khodabandeh, who has stated that ISIS drew on MEK “expertise” for the terror attacks on Tehran. Certainly, the MEK have been active in carrying out operations inside of Iran for decades now, while ISIS has not. Massoud Khodabandeh’s analysis of the attacks is stunning, and raises two essential points:

“The targets selected by ISIS were sites constantly targeted by the MEK. The Iranian Parliament and its members had always been primary targets for the MEK since the 1980s. The group had managed to assassinate several members of the Parliament and tried to plant a bomb there at one point. They were unsuccessful and some members were killed by security forces while other terrorist teams were arrested. Similarly, after Ayatollah Khomeini’s shrine was created, Massoud Rajavi, the late MEK leader, announced that ‘Khomeini’s grave must be exploded’. It became a mantra among MEK members which they would chant in indoctrination sessions. The MEK tried unsuccessfully to send terrorist teams there in 1991 and 2002.”

“While ISIS and the MEK have the same interests in attacking Iran, ISIS could have caused much greater anti-government fear and hatred among the civilian population in line with its regime change agenda if they had bombed a civilian target like transport infrastructure or a shopping mall. They could have done more damage by targeting the Revolutionary Guards whose forces are in Syria. Instead, the ISIS targets matched those which had been constantly under attack by the MEK for thirty years.”

The MEK factor is extremely worrying because it signals a new leg in Washington’s asymmetric war in the region. History shows us that when great powers sow this level of chaos, the chances for a multi-country conflagration becomes more likely.

Regardless of where blame is apportioned in this case, Iran seems to have accepted the claim by ISIS for these attacks on Iranian soil, effectively giving Tehran an internationally recognized green light to act unilaterally against ISIS assets inside Syria.

For those who subscribe to the school of thought that implicates Saudi Arabia and the U.S. for aiding and supporting ISIS covertly, then Iran has not only called their bluff, but co-opted their own “anti-ISIS” narrative too.

Presently, Iran has military assets deployed in Syria at the invitation of the government in Damascus, so it’s certain that both Damascus and Moscow were aware of Iran’s missile strike in advance, but not the U.S. – once again demonstrating that without significant ground assets deployed in the region the U.S. cannot really control the situation around Raqqa. This means that Washington, no matter how hard its media machine can spin, are simply not able to dictate facts on the ground in Syria.

Clearly, Iran seized an advantage here, but how this plays out in terms of increased tensions with the U.S.-led Coalition in Syria remains to be seen.

The most worrying aspect of this development is the timing. On the same day as Iran fired missiles into Deir Az Zor province in Syria, a U.S. F/A-18E Super Hornet shot down a Syrian SU-22 fighter jet near Raqqa. Washington claimed it as an act of “collective self-defense” as the Syrian jet had dropped bombs “near US-backed forces.” As a result of this overt act of aggression by the U.S., the Russian Defense Ministry announced that it is halting its “Deconfliction” cooperation with its U.S. counterparts set out in their bilateral Memorandum on the Prevention of Incidents and Ensuring Air Safety in Syria.

Add to this the fact that each day the U.S. continue to kill more Syrian civilians during their supposed “anti-ISIS” strikes in Raqqa, and it’s not difficult to see that the U.S. position is becoming increasingly isolated in the Middle Eastern theatre, leaving its only two remaining solid partners as a pair who themselves are now widely regarded as rogue states in the region: Saudi Arabia and Israel.

The scene has now been set for a wider war. All it will take is a small spark between the two major opposing geopolitical forces or their allies.