Russia has been made “the go-to scapegoat” for distracting Americans from the serious problems afflicting the U.S. government, says Thomas Drake, a former senior executive at the National Security Agency who blew the whistle on multi-billion-dollar waste and violations of the rights of citizens through secret mass surveillance programs after 9/11.

As retaliation, the Obama Administration indicted Drake in 2010 as the first whistleblower since Daniel Ellsberg charged with espionage, carrying a possible 35-year prison term. However, in 2011, the government’s case against him collapsed and he went free in a plea deal. He became the recipient of the 2011 Ridenhour Truth-Telling Prize. 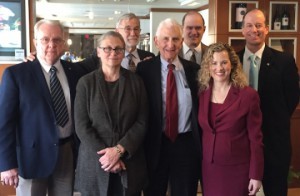 I sat down with Thomas Drake on June 3, 2017, at the home of ConsortiumNews editor Robert Parry in Arlington, Virginia, on the occasion of the awarding of the 2016 Gary Webb Freedom of the Press Award to Oliver Stone.

Dennis Bernstein: I want to ask you about a story. ConsortiumNews has offered quite a different perspective on the relationship between the U.S. government and Russia [questioning the allegations about] Trump collaborating with Putin. What’s your take on this story? Do you think that ConsortiumNews is onto something in terms of really questioning that whole line?

Thomas Drake: Yes. This hyperbolic narrative that is posited almost to the point of hysteria. They would say that Russians are behind everything. “It’s all the Russians’ fault and you can blame Russia.” It’s just pure political pretension and there is a significant amount of propaganda behind it.

It’s intended to distract. It’s intended to keep people from really looking at some of the deeper truths of our own government and so it is very convenient for the political elites, on both sides of what has become the Democratic/Republican divide, which in fact is not a divide; it’s two sides of the same coin, with slightly different narrative – to project all the blame on Russia and particularly the hyper-conflation of the littlest thing that would appear to be that Trump is ruining the country or Trump is the worst thing that has ever happened. Just really taking this
way, way beyond the pale.

And ConsortiumNews — having written for ConsortiumNews going back several years now as a result of my case and mass domestic surveillance and government abuse of power — is one of the few – it’s surreal for me to say this right now – it’s one of the few alternative media outlets who have the courage to stand up to the elite narrative and get behind this hyper-partisan politicization of blaming it all on external entities.

And, in this case, Russia has become the go-to scapegoat, frankly. And it’s easy to simply focus on that as your excuse without having to concern yourself with the deeper trends in terms of the darker history of American politics.

And Gary Webb – I am quite familiar with his case. Remember he had his own profession turn on him because they wanted to curry favor with power and they wanted to have access to power. So it was full access press and power is an aphrodisiac. Henry Kissinger said that. …

DB: Access press, as in, if you don’t say the right thing […] they can toss you into prison.

TD: Yep, precisely. And so you’re willing to overlook what may be done under the cover or blanket of government, the government structure. And so ConsortiumNews is one of the few. …

I was sort of the pre-Snowden Snowden. …

DB: He cites you for opening that door….

TD: Well, he has said there wouldn’t have been him without me. And he has cited a number of people who have preceded him, right? And I was there at the foundation, at this extraordinary willful violation of, in secret, of what I call the subversion of the Constitution. Really, it was a silent coup against the Constitution….

DB: What are the multiple dangers of the way in which information is used now, and slanted to support policy as opposed to inform?

TD: Well, it’s self-interest. It’s largely self-interest driven. You have, what I have sometimes called Gov-Corp, which is a combination of government and corporations and it’s an extraordinarily pathological relationship because they feed on each other. One protects the other and when you have the government corrupting itself to serve very powerful interests at the expense of public interests, guess what? Something has to give and what gives is public transparency. What gives is accountability. What gives is responsible power. What gives is the promise. What gives is “we the people”, right?

Power just… generally at least, power is about the people and it’s pathological, and so unfortunately the checks and balances that have in the past – Ellsberg is eyewitness to this — he’s certainly a key person by simply standing up with his colleague Edgar Russo, standing up to power in terms of the bright and shiny light called Vietnam, right? He clearly brought into the public purview what was really going on with Vietnam and, ultimately, as we know, I was a very young teen growing up in the ’70s. He was already in his early 40s at the time. That, yeah, the government can use power… and that, yeah, power does tend to corrupt. Lord Acton was right.

So, what became known as the imperial presidency of Nixon, this era makes that era look like a hyper type of person, especially post-9/11. It’s just extremely concerning. It’s what I would call the devolution of democracy and constitutional rights following 9/11 and Ellsberg has said and I have said, what was actually unlawful and unconstitutional has been made legal from his time.

And the old, what became the infamous statement made by Nixon, “You know, if the President says it’s okay, it’s not illegal.” I heard almost those exact same words when I confronted the lead attorney in the Office of General Counsel. That was the first week in October 2001. I had already found out about the massive domestic surveillance program that had been unleashed. And I confronted him and he said, “This is great. The White House has approved the program. It’s all legal.” …. The hairs on the back of my neck were like…. I’m having major flashbacks… Wait a minute, just because the White House approves it, it makes it okay? I mean, history is not kind. He says,” Yep, we’re the executive agent – all approved. Yes. Don’t ask any more questions.”

So, because the White House approved it, then it’s okay to violate the Constitution. All those checks were put in place as a result of the … president resigning, the standing committees and intelligence House and the Senate, the Foreign Intelligence Surveillance Act and a whole lot of others, right? So that was the check and balance, right? Nah, just, hey 9/11, the failure of the government to provide the common defense. 3,000 people murdered that day. It should never have happened. It really should never have happened. And so we are going to use that as sort of a reverse false flag. We’re going to use that as an excuse, because, “Hey, after all, the Constitution is not a suicide pact… you know, we don’t know where the enemy is.”

So just this weird, everything is existential now. We now know how the enemy is because of 9/11. And so it’s weird for me, having been brought up as a very young lad during the Cold War and remembering alarms going off and they’d turn off the lights and block the hall and face your lockers, right? The air raid sign drills and fears of the nuclear winter. It’s like these people want a World War 2.0.

DB: I guess what we all have in common is the state of the Earth at this point.

TD: The state of the Earth? We are the third rock from the sun. I mean, this is our home. The world is a much smaller place, in part because of technology and in part because we find out that, yeah, we really are dependent on each other.

The U.S. is an empire… and it is a sign of an empire that is losing it. And so, just like the Roman Empire, I mean, if you go back to the rise and fall of the Roman Empire, you know…. Those who don’t learn the lessons of the past are doomed to repeat them.

DB: Well, and the beat goes on. We’re going to let you join the party.

TD: The beat does go on. Yeah.

DB: But as we speak, there’s a major bombing, frightening bombing in Iran today.

DB: After the President of the United States is in Saudi Arabia. When is the last time you heard of a major suicide bomb in Iran?

DB: So, here we go and who knows what comes next, who know what that’s going to bring in that part of the world. We thank you for all of your courage and all the suffering you did for all of us so we could know more. Thank you very much.

TD: Yeah. No. I have really become a warrior for peace. That’s what I have become. Ultimately it’s about who we are as human beings and who we are for each other and after all it is us, right? And in terms of U.S. culture and background, I think Pogo was right. We have met the enemy and the enemy is us. We are our own worst enemies.

It’s just that, for some of us, it’s critical to hold power accountable. We recognize we don’t govern ourselves very well. If you put people over others, yeah, bad things happen. But bad things tend to happen. And it’s that whole control, power. It’s all about — psychopathy is an area of study that I increasingly have as an issue, because of this idea that people gaining pleasure from the distress of others. So, it’s a disease. It really is. And some of us, at great sacrifice, weren’t going to just sit idly by and watch it all happen.

I care deeply about who we are as human beings. And I’ve spent a lot of time in front of college students and high school students and civic auditoriums and small group settings and churches and college campuses talking about these things. These are things that matter.

20 comments for “How Fear of Russia Misleads Americans”