Exclusive: To prove their chops, mainstream media stars can’t wait to go head-to-head with a demonized foreign leader, like Vladimir Putin, and let him have it, even if their “facts” are wrong, as Megyn Kelly showed and Ray McGovern explains.

NBC’s Megyn Kelly wielded one of Official Washington’s most beloved groupthinks to smack Russian President Vladimir Putin over his denials that he and his government were responsible for hacking Democratic emails and interfering with the U.S. presidential election. 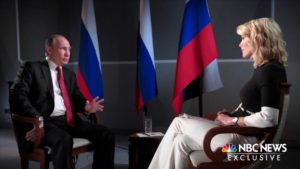 In her June 2 interview with Putin, Kelly noted that all “17 intelligence agencies” of the U.S. government concurred in their conclusion of Russian guilt and how could Putin suggest that they all are “lying.” It’s an argument that has been used to silence skeptics for months and apparently is so useful that no one seems to care that it isn’t true.

For instance, on May 8, in testimony before a Senate Judiciary subcommittee, former Director of National Intelligence James Clapper conceded publicly that the number of intelligence agencies involved in the assessment was three, not 17, and that the analysts assigned to the project from CIA, FBI and NSA had been “handpicked.”

On May 23, in testimony before the House Intelligence Committee, former CIA Director John Brennan confirmed Clapper’s account about the three agencies involved. “It wasn’t a full inter-agency community assessment that was coordinated among the 17 agencies,” Brennan acknowledged.

But those public admissions haven’t stopped Democrats and the mainstream media from continuing to repeat the false claim. In comments on May 31, failed presidential candidate Hillary Clinton repeated the canard, with a flourish, saying: “Seventeen agencies, all in agreement, which I know from my experience as a Senator and Secretary of State, is hard to get.”

A couple of days later, Kelly revived the myth of the consensus among the 17 intelligence agencies in her interview with the Russian president. But Putin passed up the opportunity to correct her, replying instead:

“They have been misled and they are not analyzing the information in its entirety. … We have talked about it with former President Obama and with several other officials. No one ever showed me any direct evidence. When we spoke with President Obama about that, you know, you should probably better ask him about it – I think he will tell you that he, too, is confident of it. But when he and I talked I saw that he, too, started having doubts. At any rate, that’s how I saw it.”

As I noted in a Jan. 20 article about Obama’s news conference two days earlier, “Did President Barack Obama acknowledge that the extraordinary propaganda campaign to blame Russia for helping Donald Trump become president has a very big hole in it, i.e., that the U.S. intelligence community has no idea how the Democratic emails reached WikiLeaks? For weeks, eloquent obfuscation – expressed with ‘high confidence’ – has been the name of the game, but inadvertent admissions now are dispelling some of the clouds. …

“At President Obama’s Jan. 18 press conference, he admitted as much: ‘the conclusions of the intelligence community with respect to the Russian hacking were not conclusive as to whether WikiLeaks was witting or not in being the conduit through which we heard about the DNC e-mails that were leaked.’” [Emphasis added]

More importantly, Putin in his interview with Kelly points out that “today’s technology” enables hacking to be “masked and camouflaged to an extent that no one can understand the origin” of the hack. “And, vice versa, it is possible to set up any entity or any individual that everyone will think that they are the exact source of that attack. Modern technology is very sophisticated and subtle and allows this to be done. And when we realize that we will get rid of all the illusions. …”

Later, when Kelly came back to the issue of hacking, Putin expanded on the difficulty in tracing the source of cyber attacks.

“Hackers may be anywhere,” Putin said. “There may be hackers, by the way, in the United States who very craftily and professionally passed the buck to Russia. Can’t you imagine such a scenario? In the middle of an internal political fight, it was convenient for them, whatever the reason, to put out that information. And put it out they did. And, doing it, they made a reference to Russia. Can’t you imagine it happening? I can.

“Let us recall the assassination of President Kennedy. There is a theory that Kennedy’s assassination was arranged by the United States special services. If this theory is correct, and one cannot rule it out, so what can be easier in today’s context, being able to rely on the entire technical capabilities available to special services than to organize some kind of attacks in the appropriate manner while making a reference to Russia in the process. …”

However carefully Megyn Kelly and her NBC colleagues peruse The New York Times, they might well not know WikiLeaks’ disclosure on March 31 of original CIA documents showing that the agency had created a program allowing it to break into computers and servers and make it look like others did it by leaving telltale signs (like Cyrillic markings, for example).

The capabilities shown in what WikiLeaks calls the “Vault 7” trove of CIA documents required the creation of hundreds of millions of lines of source code. At $25 per line of code, that amounts to about $2.5 billion for each 100 million code lines. But the Deep State has that kind of money and would probably consider the expenditure a good return on investment for “proving” the Russians hacked into Democratic Party emails.

In other words, it is altogether possible that the hacking attributed to Russia was actually one of several “active measures” undertaken by a cabal consisting of the CIA, FBI, NSA and Clapper — the same agencies responsible for the lame, evidence-free report of Jan. 6, that Clapper and Brennan acknowledged last month was not the consensus view of the 17 intelligence agencies.

There is also the issue of the forensics. Former FBI Director James Comey displayed considerable discomfort on March 20, explaining to the House Intelligence Committee why the FBI did not insist on getting physical access to the Democratic National Committee’s computers in order to do its own proper forensics, but chose to rely on the examination done by the DNC’s private contractor, Crowdstrike.

The firm itself has conflicts of interests in its links to the pro-NATO and anti-Russia think tank, the Atlantic Council, through Dmitri Alperovitch, who is an Atlantic Council senior fellow and the co-founder of Crowdstrike.

Given the stakes involved in the Russia-gate investigation – now including a possible impeachment battle over removing the President of the United States – wouldn’t it seem logical for the FBI to insist on its own forensics for this fundamental predicate of the case? Or could Comey’s hesitancy to demand access to the DNC’s computers be explained by a fear that FBI technicians not fully briefed on CIA/NSA/FBI Deep State programs might uncover a lot more than he wanted?

BURR: “And the FBI, in this case, unlike other cases that you might investigate — did you ever have access to the actual hardware that was hacked? Or did you have to rely on a third party to provide you the data that they had collected?”

COMEY: “In the case of the DNC, and, I believe, the DCCC, but I’m sure the DNC, we did not have access to the devices themselves. We got relevant forensic information from a private party, a high-class entity, that had done the work. But we didn’t get direct access.”

BURR: “Isn’t content an important part of the forensics from a counterintelligence standpoint?”

COMEY: “It is, although what was briefed to me by my folks — the people who were my folks at the time is that they had gotten the information from the private party that they needed to understand the intrusion by the spring of 2016.”

Burr demurred on asking Comey to explain what amounts to gross misfeasance, if not worse. Perhaps, NBC could arrange for Megyn Kelly to interview Burr to ask if he has a clue as to what Putin might have been referring to when he noted, “There may be hackers, by the way, in the United States who very craftily and professionally passed the buck to Russia.”

Given the congressional intelligence “oversight” committees’ obsequiousness and repeated “high esteem” for the “intelligence community,” there seems an even chance that – no doubt because of an oversight – the CIA/FBI/NSA deep-stage troika failed to brief the Senate “oversight committee” chairman on WikiLeaks “Vault 7” disclosures – even when WikiLeaks publishes original CIA documents.

Ray McGovern works with Tell the Word, a publishing arm of the ecumenical Church of the Saviour in inner-city Washington.  He is a 27-year veteran of the CIA analysis division and was chief of its Soviet Foreign Policy Branch and prepared the President’s Daily Brief for Nixon, Ford, and Reagan.