An ISIS-claimed terror attack in Iran killing a dozen people shows how dishonest the U.S. government has been in lumping Iran in with terror groups that it has aggressively fought, as ex-CIA analyst Paul R. Pillar explains.

For Americans fed a diet of rhetoric about Iran that constantly links it to the sending, not the receiving, end of terrorism — in which “the leading state sponsor of terrorism” is the adjectival phrase routinely affixed to Iran, and in which official rhetoric such as President Trump’s speech in Riyadh mashes Iran together with Sunni Islamist terrorism of the ISIS variety into one undifferentiated blob of evil — the deadly attacks today in Tehran generate much cognitive dissonance. 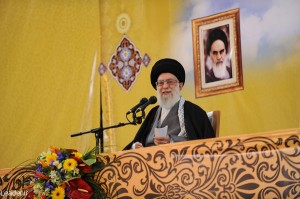 But however disorienting this news may have been, it is true. An obviously well-planned operation struck at the heart of Iran, at its parliament and the monument to the Islamic Republic’s founder. At least a dozen people were killed and dozens more injured. The credibility of the claim of responsibility by ISIS is enhanced by the group’s posting of video footage from the attack.

For anyone looking beyond rhetoric and at reality, the attack is no surprise. Iran has been one of the staunchest and most active foes of ISIS. Probably the main reason an attack like this had not happened any earlier is the difficulty that ISIS has had in finding recruits among Iranians.

Iran has, partly with its own personnel but mainly through material support of clients and allies, been a leader in combating ISIS, especially in Iraq and to a lesser extent in Syria. Many Iraqis give Iran, with good reason, the main credit for saving Baghdad from ISIS when the group was making its dramatic territorial gains in northern and western Iraq in 2014.

If the United States could overcome its current hang-up about doing any business with Iran, it would find a worthwhile partner in many aspects of counterterrorism, especially as far as the fight against ISIS is concerned.

There has long been a willingness, and a necessary awareness of shared interest, on the Iranian side.

In September 2001, immediately after the 9/11 attacks on New York and Washington, both Supreme Leader Ali Khamenei and then-President Mohamed Khatami strongly condemned the attacks. Expressions of sympathy in Iran for the American victims included candlelight vigils and observing a minute of silence by tens of thousands of people at a sporting event.

Two weeks after the attack, Khatami stated, “Iran fully understands the feelings of the Americans about the attacks in New York and Washington.” Khatami correctly noted that American administrations had been at best indifferent about terrorist attacks in Iran since the revolution of 1979, but that Iranians felt differently and were expressing their sympathies accordingly.

We wait to hear from the Trump administration the kind of expression of sympathy and solidarity that commonly is offered to foreign nations that have become victims of major terrorist attacks. We should not hold our breath while waiting.

The Iranians certainly aren’t. They have experienced a long history of American postures toward Iran, in the context of a common terrorist threat, that have ranged from indifference at best to door-slamming at worst. In the first few months after 9/11, Iranian officials worked cooperatively and effectively with U.S. officials to midwife a new regime in Afghanistan to replace the Taliban.

The Iranians thought this could be the beginning of further cooperation against a common threat. But then the United States slammed the door shut, as George W. Bush declared an “axis of evil” in which Iran was lumped together with North Korea and Saddam Hussein’s Iraq.

The principal perpetrator of terrorism in Iran over the past four decades has been the Mujahedin-e Khalq (MEK), the Marxist/Islamist cult/terrorist group that prior to the revolution had claimed Americans among its victims. Thanks largely to the MEK’s activity, Iran necessarily has had much experience in countering terrorism. Khamenei lost the use of his right arm when he was injured by an MEK bomb in an assassination attempt in 1981.

The U.S. handling of the MEK in recent years has seen the U.S. Government succumbing to a well-financed lobbying campaign on behalf of the group, with that campaign winning much support for the group in the U.S. Congress and the group eventually being removed from the U.S. list of Foreign Terrorist Organizations. If the crippled Khamenei exhibits some reflexive anti-U.S. sentiments, do you suppose this history has something to do with it?

Right now, on the very day of the terrorist attacks in Tehran, the United States Senate is scheduled to take its first vote on a bill that would impose still more sanctions on Iran. It appears the most immediate American response to the attacks will be sanctions on, not sympathy for, the victim.

In the months ahead, Iran may take actions outside its borders in response to the attacks. The United States, ever since 9/11, has claimed a right for itself to be ruthlessly aggressive in the name of responding to terrorism, lashing out with force while sometimes being little restrained by collateral damage or international law (not to mention its own constitutional requirements).

Iran may see a need to be more aggressive in places such as Iraq or Syria in the interest of fighting back against ISIS. Will the United States grant Iran the same kind of slack it grants itself? Or, as has been customary in opposing anything Iran does and taking no account of exactly what interests are being advanced or threatened, will the Iranian responses be denounced as more “nefarious,” “malign,” and “destabilizing” behavior?