Israel’s right-wing governments bear the greatest guilt for the last half-century of oppressing the Palestinians but the divided and ineffectual opposition has played its part, too, says Alon Ben-Meir.

On June 5, Israel reaches the grim milestone of 50 years of occupation of the West Bank. Many Israelis have become complacent and succumbed to the government’s argument that the continuing occupation is necessary to safeguard Israel’s national security.

Others are lamenting the day, as they view the occupation not only as a gross violation of Palestinian human rights, but a real menace to Israel’s democratic nature and Jewish national character.

Whereas right-wing Israeli governments have maintained the occupation by any means available, including the use of force, the Israeli opposition parties from the left and center have failed miserably over many years to advance a unified political platform to end the occupation and resolve the conflict based on a two-state solution.

With every passing day, it is becoming increasingly difficult to establish a Palestinian state with a contiguous land mass, which is a result of legalizing illegal settlements and building new and expanding existing ones. This settlement activity has changed the demographic composition of Israeli Jews and Palestinians inside the West Bank.

Should this trend continue for another ten years, it is estimated that the number of Jews living in the West Bank and East Jerusalem will grow from the current 650,000 to one million, creating irreversible facts on the ground that will render the two-state solution inviolable.

Successive right-wing Israeli governments, especially the current one led by Benjamin Netanyahu, have never committed to a two-state solution. Instead, they have determined to manage the occupation by the use of force and intimidation while forcing the Palestinians to live in self-governing cantons and allowing them to manage their own internal affairs as long as they do not pose a security threat.

This dangerous development was largely made possible by two factors: first is the Israeli political system, which encourages the proliferation of parties with various political orientations. On average, there are 12-15 political parties that garner the minimum threshold of 3.25 percent of the votes to be elected. As a result, every Israeli government since the inception of the state is a coalition government consisting of several parties, which together enjoy the backing of a majority in the Knesset. The second is the fact that past and current opposition parties from the center and left have been unwilling to form a coalition government with a united platform to end the occupation.

One of the main reasons behind this discord between the parties is not as much their ideological difference but the blind personal ambition of party leaders — including Yair Lapid of Yesh Atid, Isaac Herzog of the Zionist Union (along with Tzipi Livni), and others — to become prime minister, as they view themselves as the most qualified to lead the country.

Thus, the political field was left open for Netanyahu and his cohorts to expand the settlements, forcefully claiming that the Jews have a historic and biblical right to the entire “Land of Israel” that God bequeathed to them, and that Israel has every right to build anywhere in Judea and Samaria. Although Netanyahu continues to assert that he supports a two-state solution, he never provided a convincing argument as to how he would square the creation of a Palestinian state with Israel’s claims to the same land and its continued building of settlements where the Palestinians are supposed to establish their own state.

To explain the “rationale” behind this contradiction, however, he argues that Israel’s concerns over security and the Palestinians’ long-term objective to destroy the state compels Israel to maintain its control over the entire territory by whatever intrusive security measures necessary. Moreover, several members of the Netanyahu government openly call for the annexation of much of the West Bank, as from their perspective there must never be a Palestinian state.

The dire consequences of continuing the occupation are extremely damaging to Israel’s character and national security. Other than the intense and growing opposition of the international community, Israel’s loss of its moral compass and continued resistance to the creation of a Palestinian state will be to its detriment. Israel is increasingly becoming a pariah state, deprived of peace with the Arab world and gradually losing its very reason to exist as a Jewish state that ironically Netanyahu and the extreme right insist on characterizing it as such. 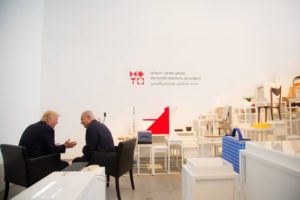 President Donald Trump and Israeli Prime Minister Benjamin Netanyahu talk together prior to President Trump’s address, May 23, 2017, at the Israel Museum in Jerusalem. (Official White House Photo by Shealah Craighead)

Finally, the continuing occupation will inevitably intensify the conflict, which will become ever more ferocious as the Palestinians’ prospect of establishing a state of their own fades away.

Israel’s future as a democratic and Jewish state rests on the shoulders of the opposition parties. They must think of what will happen if the current or future right-of-center governments continue with the present policy and maintain the occupation for another 10 years or more.

They must remember that the fate of the country is in their hands. They must set their personal ambitions aside and put the future security and wellbeing of the state first. They must produce a unified political program to end the occupation and explain to the public the disastrous consequences Israel will face unless the occupation comes to an end.

As a single party with unity of purpose, they can successfully challenge the Netanyahu government in the next election. They should learn from 70 years of experience that no political party has been able to garner a majority of the electorate to form a government on its own, but together they can mobilize the public behind the noble cause of unshackling Israel from the self-degrading occupation.

If they fail, they too will be blamed for having betrayed the nation and sacrificed a millennium-old dream of a Jewish state — a state recognized not only because of its unprecedented achievements, but for its high moral standing and the realization that its future as an independent, free, and secure state depends on allowing the Palestinians to enjoy the same rights.

← The Kissinger Backchannel to Moscow
Will the Neocons’ Long War Ever End? →

36 comments for “A Half-Century of Oppression”