President Trump’s speech to the Islamic world amounted to a pander to his regal Saudi hosts and a blindness toward the realities of Mideast terrorism, explains ex-CIA analyst Paul R. Pillar.

The bar for Donald Trump’s speech in Riyadh had been set so low that it was scraping the sand. How much could be expected from a notorious exploiter of Islamophobia speaking to a gathering of leaders of majority Muslim countries? Getting through the experience without causing major new damage should perhaps be considered a success. Perhaps Trump and his speechwriters were wise not to attempt anything more. The Hippocratic principle applies: first do no (more) harm. 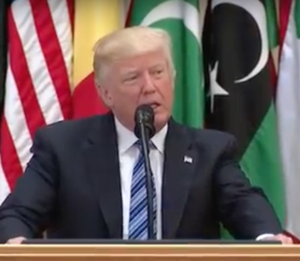 President Trump speaks at the Arab-American summit in Riyadh, Saudi Arabia, on May 21, 2017. (Screenshot from Whitehouse.gov)

Most Muslims hearing the speech, especially the more knowledgeable ones who have followed Trump’s candidacy and presidency, know his qualities, know he is capable of delivering a scripted speech without falling on his face, and are unlikely to have had the speech change any of their perceptions of Trump, his administration, or the United States. They will not be surprised, once Trump is back in Washington, to hear of more exploitation of Islamophobia regarding travel bans or something else.

Trump’s speech evidently was crafted to appeal to a very narrow audience: the Saudi regime, along with some similar ruling brethren in places such as the United Arab Emirates, while coloring the appeal with some distinctively Trumpian touches.

The kind of compliments that had pride of place in the speech — up near the front, along with Trump’s usual and inevitable assertions about how back home he had “created almost a million new jobs” and “lifted the burdens on American industry” — focused on glitz: the “grandeur” of the conference hall, the Saudis’ “soaring achievements in architecture,” and the UAE’s having reached “incredible heights with glass and steel.”

These are not the sorts of observations likely to have much resonance with the man in the street in Riyadh, let alone the streets of countless other majority Muslim cities. The narrowness of the appeal in the speech exacerbated the narrowness in the selection of Saudi Arabia as the place for a first presidential visit that was supposedly representative of an entire religion. Certainly there will be little positive resonance among the whole Shia branch of Islam.

Speaking of Shia, the speech had, of course, the obligatory excoriation of Iran. That passage reads like the response to a “cue the anti-Iran invective” direction given to the speechwriters; it is awkwardly divorced from the context of both the surrounding parts of the speech itself and what has been transpiring in the real world. After talking about violent extremism that is mostly the extremist Sunni variety spearheaded by ISIS, the anti-Iran passage asserts that Iran is “the government” that gives “terrorists” everything they need to do their evil deeds, assertions oblivious to how Iran is on the opposite side from ISIS and Al Qaeda throughout the region, including Iraq, Syria, and Yemen.

In the same passage, Trump said that “until the Iranian regime is willing to be a partner for peace, all nations of conscience must work together to isolate it.” There was no mention anywhere in the speech of the laboriously negotiated multilateral agreement that limits Iran’s nuclear program. Participation in that negotiation doesn’t count as willingness to be a partner for peace? The nuclear program was the one thing Iran was doing that, before negotiation of the agreement, the anti-Iran rhetoricians were most vehement about highlighting as a supposed threat to peace.

Trump also said everyone should “pray for the day when the Iranian people have the just and righteous government they so richly deserve” while saying nothing that suggested any awareness or acknowledgement of how, just two days earlier, Iranians had voted in a presidential election, re-elected the reformist candidate, and rejected by a landslide margin the leading hardline candidate. Trump was exhibiting a kind of diplomatic autism that takes no heed of the sentiments, objectives, and even actions of the other party.

All this, especially the anti-Iran part, was music to the ears of the Saudi rulers. But besides acting like a guest who is pleasing to the hosts, what else did this speech accomplish? What else, that is, besides avoiding any new Trumpian disasters? A major speech by a U.S. president to foreign audiences should do more than suck up to the rulers of whatever is the speech’s venue.

The ideal speech should deftly convey messages to the multiple audiences who will be listening, to address questions that are meaningful and important to each of the audiences in a way that indicates understanding of their problems, and to use persuasion to move those audiences in a direction conducive to U.S. interests and international peace and security and in which they would not otherwise have moved, or moved as much.

The most useful lines in Trump’s speech acknowledged that Muslims are the most numerous victims of terrorism, noted the need for religious leaders to counter extremist exploitation of their religions, and appealed for religious tolerance.  But by throwing himself so fully into the arms of the Saudi regime, it is hard to identify how the speech is likely to move the needle in a positive direction as far as the behavior of either that regime or other regimes is concerned.

There was barely any hint of awareness about political, economic, and social conditions that have much to do with how much terrorism there will be in the years ahead and how many drivable terrorists there will be in the first place. But it is in affecting those conditions that regimes such as the Saudi regime could do the most good. They don’t need exhortations about “driving out.” The Saudis used to have a policy of driving extremists out of the kingdom, which was just a way of sloughing the problem off on someone else and did nothing to solve the problem. 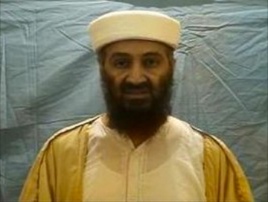 The late Osama bin Laden, a Saudi militant whose jihad in the 1980s against Soviet troops in Afghanistan was supported by the Saudi government.

The speech’s approach to interstate relations was similarly crude and similarly unlikely to shape behavior in a favorable direction. The Saudis and other Gulf Arab regimes don’t need any encouragement to be staunchly anti-Iran. What is needed, in the interests of regional peace and security and thus in U.S. interests, is greater efforts at reconciling competing interests in nonviolent ways.

If we or they do not like something Iran is doing and that we regard as irregular and illegitimate, then it behooves us and our partners, as well as the Iranians, to promote peaceful, legitimate diplomacy as a means of reconciliation — rather than exhortations that promote more hostility and isolation.

Trump got through his speech without adding to self-inflicted damage of the sort that awaits him back in Washington. But the speech does more to divide than to unite, and it does more to stoke conflict in the Middle East than to reduce it.

Paul R. Pillar, in his 28 years at the Central Intelligence Agency, rose to be one of the agency’s top analysts. He is author most recently of Why America Misunderstands the World. (This article first appeared as a blog post at The National Interest’s Web site. Reprinted with author’s permission.) .

19 comments for “Trump Panders to the Saudi Royals”