Exclusive: A prototype of the modern foreign lobby in Washington was the China Lobby, bribing and bending U.S. politicians to serve the will of the Nationalists who fled to Taiwan and helped fuel McCarthyism, reports Jonathan Marshall.

By Jonathan Marshall (This is the second in a series on foreign lobbies.)

One of the first big foreign lobbies to blossom after passage of the 1938 Foreign Agents Registration Act was the infamous China Lobby, defined by William Safire in his political dictionary as an “attack phrase used against those urging support of Chiang Kai-shek against Mao Zedong, and later pressing for aid to Chiang on Taiwan.” 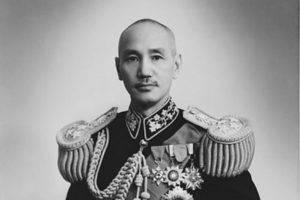 General Chiang Kai-shek who led the Chinese Nationalists and fled to Taiwan after the Communist victory on mainland China.

Testifying to the China Lobby’s seminal importance – actually what would more accurately be called the Taiwan Lobby – Safire credited it with inspiring the term “Israel lobby” to describe the equally formidable support network for another equally tiny country.

The China Lobby demanded — and won — billions of dollars in military and economic aid for Chiang’s dictatorship, first on mainland China and then on Taiwan. Exploiting the wave of anti-Communism during the McCarthy era, it also ruthlessly suppressed any criticism of Nationalist China’s shortcomings or any moves toward diplomatic recognition of the People’s Republic of China.

Some of its American operatives were opportunistic lawyer-lobbyists like Thomas Corcoran, a former New Dealer who turned his talents to money-making intrigues. Some were anti-communist militants like Gen. Claire Chennault of Flying Tigers fame, who founded a CIA-controlled airline (Civil Air Transport) with Corcoran’s help to support Chiang’s armies and run covert operations in the Far East.

Many were partisan Republicans who rejected criticism of Chiang’s corrupt regime and attacked the Truman administration for not sending enough financial and military aid to prevent the “fall of China.”

In 1949, two members of Congress called for an investigation of the lobby’s “brazen power.” Rep. Mike Mansfield, a Montana Democrat who would later become Senate majority leader, accused Nationalist Chinese officials — who had fled the mainland for Taiwan that year in the wake of the communist revolution — of diverting U.S. aid to fund political propaganda in the United States.

Ironically, a timely dispensation of $800,000 from Nationalist Chinese officials in Taiwan to their New York office financed a successful campaign to squelch that proposed investigation.

“While what is left of Chiang’s army is rusting in Formosa [another name for Taiwan], the Lobby’s operators are employing all their mental and financial resources in the United States,” observed editor Max Ascoli. “In the last couple of years, they have had remarkable success. Once more the big lie has proved to be unanswerable and undebatable.”

Commenting on the China Lobby’s ruthless methods, including McCarthyite demagoguery and the purge of liberal China experts from government, the magazine called it “the nearest thing to an effective Communist Party our country has ever had. There is no other outfit to which the China Lobby can be compared, with its hard core of fanatical, full-time operators, its underground, its legion of naïve, misled fellow travelers, its front organizations, and its foreign officials, in Washington with diplomatic immunity, who dutifully report to central headquarters.”

The Reporter series likely had the support of officials in the Truman administration, and was substantially reported by a veteran U.S. intelligence officer who went to work for Time magazine after serving as the CIA’s first station chief in Paris.

His co-author gave an advance briefing to the assistant to the director of the CIA in March 1952, offering up one explosive detail kept out of the published version: “the Nationalist government pumped more than $2,000,000 into the Republican campaign in 1948.”

The success of Republicans in the 1952 elections, however, forced the CIA more into line with the China Lobby. Pro-Taiwan organizations like the Committee to Defend America by Aiding Anti-Communist China and the Committee on National Affairs included among their officers or directors notable front-men for CIA propaganda operations, such as William Donovan, former head of the Office of Strategic Services, Jay Lovestone, a CIA-funded labor organizer, and Cord Meyer, who took charge of the Agency’s International Organizations Division in 1954.

The executive chairman of ARCI, Christopher Emmet, lauded its role in “making Americans more aware of the Chinese anti-Communist cause. . . . The reason is that the humanitarian appeal for relief incidentally permits giving all the political facts about persecution, etc. . . It does not invite argument and attack as in the case of direct political propaganda.”

The first academic study of this pressure campaign finally appeared — ever so briefly — in 1960. In the introduction to his The China Lobby in American Politics, political scientist Ross Koen made the blockbuster allegation that “There is . . . considerable evidence that a number of [Nationalist] Chinese officials engaged in the illegal smuggling of narcotics into the United States with the full knowledge and connivance of the Nationalist Chinese Government. The evidence indicates that several prominent Americans have participated in and profited from these transactions. It indicates further that the narcotics business has been an important factor in the activities and permutations of the China Lobby.”

An energetic publicist for the China Lobby got hold of advance proofs of the book and shared them with allies in the Eisenhower administration. Together they brought heavy legal and political pressure to bear on the publisher, Macmillan, to withdraw the book. The book was not reissued until 1974, by Harper & Row.

Richard Nixon and the China Lobby

Through its hard-hitting propaganda campaigns, the China Lobby prevented U.S. diplomatic recognition of the People’s Republic of China — the most populous country on Earth — for more than two decades. Its stranglehold on U.S. foreign policy was not broken until 1972, when President Nixon finally opened talks with Beijing to help end the Vietnam War. 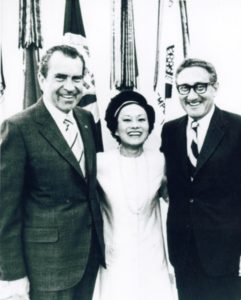 Ironically, Nixon had long been one of the China Lobby’s most ardent supporters. He won election to the Senate from California in 1950 in part by exploiting popular dissatisfaction with the Truman administration’s “loss” of China and the subsequent bloody war in Korea.

Washington columnist Drew Pearson later published the fact that Nixon took a large cash payoff from one of Chiang’s nephews to help fund his successful 1950 campaign against the liberal Democratic incumbent, Helen Gahagan Douglas. Pearson also learned — but did not publish — the fact that a Nationalist Chinese agent supplied $500,000 in cash to fund the campaign expenses of other Republican senators nationwide.

Years later, during the 1968 presidential election campaign, Nixon used the services of China Lobby notable Anna Chennault — widow of the late American general Claire Chennault and a prodigious Republican fundraiser in her own right — as his private emissary to the president of South Vietnam.

Through her, Nixon secretly blocked President Johnson’s proposal for peace talks between North and South Vietnam, in order to slow momentum for Hubert Humphrey’s campaign. Johnson, learning of the Nixon/Chennault intervention through top-secret intelligence sources, said nothing publicly but complained bitterly to Senate Republican Leader Everett Dirksen, “This is treason.”

That same year, the China Lobby inspired a parallel lobby supporting the military dictatorship of South Korea, a close anti-communist ally of Taiwan. In 1968, Richard Hanna, a Taiwan supporter and Democratic congressman from Orange County — Nixon’s home ground — “instructed” South Korea’s prime minister “on how to lobby the U.S. Congress effectively by emulating the successful models set by Israel and Taiwan.”

Islands at the center of the territorial dispute between China and Japan. (Image credit: Jackopoid)

Following his advice, a South Korean businessman, working with the Korean Central Intelligence Agency, began recycling commissions from U.S. rice sales to Korea to pay for lavish entertainment and outright bribes to “congressmen, cabinet members, and other influential persons” in Washington, including Defense Secretary Melvin Laird, during the Nixon years.

In late 1970, a CIA “bug” in the office of South Korea’s president implicated him in a scheme to spend upward of a million dollars a year to pay off dozens of U.S. officials, but the Nixon administration took no action.

In 1973, one member of Congress who later escaped prosecution for bribery because of the statute of limitations, wrote South Korea’s president a letter of appreciation, commenting, “you have an extremely competent team working on your behalf and making things come out right for your country. Nothing, as you know, happens without a great deal of work and support.”

The South Korean businessman who disbursed the bribes eventually testified before Congress in 1978, a decade after the “Koreagate” conspiracy began, under a grant of full immunity. Although he implicated some 30 members of Congress, only about 10 resigned or faced criminal charges.

Taiwan, meanwhile, continued to maintain a formidable lobby in Washington during the 1970s, despite President Nixon’s betrayal in recognizing mainland China. The lobby continued to win the hearts and minds of conservative Republicans, including Ronald Reagan. Among other vehicles, it used the services of the public relations firm Deaver and Hannaford, which also represented the military dictatorships of Argentina and Guatemala.

Partner Michael Deaver, a former aide to Governor Reagan, became President Reagan’s Deputy Chief of Staff in 1981. Much to Beijing’s displeasure, U.S. arms sales to Taiwan proceeded to soar, from $312 million in 1981 to a high of $709 million in 1985. An appreciative Taiwan, along with South Korea, provided covert support for the anti-Communist “Contras” fighting the Sandinista government of Nicaragua during these years.

In 1987, Deaver was convicted of perjuring himself before Congress and a federal grand jury regarding his use of the White House for lobbying activities.

The China Lobby lives on, with diminished clout, in today’s Republican Party. Its 2016 platform called for increased arms sales to Taiwan, reinstating it in international organizations, and a committing to its defense in case of a military showdown with China.

During the presidential campaign, candidate Donald Trump named several strong supporters of the island to his transition team. In December 2016, President-elect Trump held his notorious call with Taiwan’s leader to celebrate their respective elections and laud the “close economic, political, and security ties” between the United States and Taiwan.

Since then, of course, President Trump has reversed himself on this as on so many other policies, burning bridges with Taiwan to cultivate President Xi Jinping of China. But don’t count Taiwan out. If Xi fails to deliver on North Korea, or if U.S.-China military confrontations rise anew in the South China Sea, the small island that once commanded an army of U.S. supporters may roar yet again in Washington.

Next: The Israel Lobby