Exclusive: The failure to impose meaningful accountability on the Iraq War’s architects allows them to return as “wise” advisers to be consulted by media outlets and today’s politicians, as with Condoleezza Rice, notes James W Carden.

Condoleezza Rice, the National Security Adviser at the time of the Iraq invasion and then President George W. Bush’s Secretary of State, has returned to the public eye, out promoting her new book, entitled Democracy: Stories from the Long Road to Freedom. 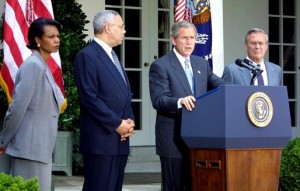 In late March, Rice met at the White House with President Donald J. Trump, who she previously had said “should not be president.” Rice’s return to the public eye would seem to prove the truth of Professor Stephen Walt’s axiom that being a neocon means never having to say your sorry.

It seems like a lifetime ago, but there was a time when Rice’s star was ascendant. An August 1999 profile of Rice in National Review dubbed Rice as “George Bush’s foreign policy czarina” and described her in rapturous terms. Rice, according to the NR’s Jay Nordlinger, was the “very picture of American overachievement”; “If she becomes secretary of state or even something lesser, she will be big. Rock-star big”; “She is, all agree, an immensely appealing person: poised, gracious, humbly smart”; “Her television appearances have prompted marriage proposals”; “And she is very much a jock.”

Nordlinger was also of the opinion that Rice was on the cusp of becoming “A major cultural figure, adorning the bedroom walls of innumerable kids and the covers of innumerable magazines.”

But it was not to be. By the end of the Bush years, Rice’s reputation lay largely in tatters. “There was a time when,” New York Times correspondent Helene Cooper wrote in September 2007, “perhaps more than Hillary Rodham Clinton or Barack Obama, Condoleezza Rice seemed to have the best shot at becoming the first woman or the first African-American to be president.”

Rice’s new book would seem to be (yet another) shot at redemption. (Rice had previously toured the country in support of her memoir, No Higher Honor: A Memoir of My Years in Washington.)

“Her faith in the benefits and strategic importance of democracy promotion,” writes Meade “is as strong as, or stronger than, it was when she joined the George W. Bush administration in 2001.” Meade, a sympathetic reviewer who shares many of Rice’s assumptions about the beneficent power of the U.S. military, approvingly observes that her new book is an “attempt to hammer home the idea of democracy promotion as a key goal for American foreign policy.”

A child of segregated Alabama, Rice says that her foreign policy views are shaped by the ideals that animated the American civil rights movement of the 1950s and 1960s. For Rice, U.S. foreign policy should be a continuation that movement, i.e., the U.S. should use its power to advance a global struggle for human and civil rights. It’s an idea that has intuitive appeal, yet when put into practice, the results have been little short of disastrous.

The period of the last 18 years – from NATO’s ill-conceived intervention on behalf of Kosovar Muslims in Serbia in 1999 through to the present day – has been marked by an optimistic and at times unshakable faith on the part of the American political establishment in its duty and right to intervene in foreign civil conflicts under democratic or humanitarian pretexts.

The intellectual framework for this “golden age of intervention” was set forth not by an American, but by a young, dynamic British Prime Minister, Tony Blair, during the course of NATO’s bombing of Serbia in 1999. In April of that year, Blair traveled to Chicago and attempted to justify the war on humanitarian grounds. In some ways, Blair’s speech heralded the era of humanitarian intervention and global democracy promotion in which we still find ourselves.

Blair declared that “We are all internationalists now, whether we like it or not. …We cannot turn our backs on conflicts and the violation of human rights within other countries if we want still to be secure.” The Prime Minister continued, stating his belief that “if we can establish and spread the values of liberty, the rule of law, human rights and an open society then that is in our national interests too.”

Initially, Rice was slow to sign on to such a transformational project; after all, according to the author James Mann, Rice “had risen to prominence as heir to the foreign policy traditions of Henry Kissinger and Brent Scowcroft. At Stanford and during the first Bush administration, she had been an avowed proponent of the doctrine of realism.”

In an essay entitled “Promoting the National Interest” in Foreign Affairs in January 2000, Rice wrote presciently that “an overly broad definition of America’s national interest is bound to backfire.” As late as 2002, her Stanford colleague and fellow Russia specialist Michael McFaul (who served as Ambassador to Russia under President Obama) said of Rice, “She believes in realpolitik, that the main driving force of international relations is balance of power politics and that what happens internally [sic] inside a country should not be part of foreign policy.”

Yet even before 9/11 and the emergence of George W. Bush’s “Freedom Agenda,” Rice had slowly been inching away from the realism of her mentor Scowcroft towards a conception of international affairs not markedly different from that of Tony Blair or the neoconservatives like William Kristol who once distrusted her.

It was during the period between 9/11 and commencement of the Iraq war that Rice’s transformation from realist to a kind of “soft” neoconservative became complete. Thereafter, she became, like Bush, Blair, Hillary Clinton and Samantha Power, an emblematic figure of the age of intervention.

By mid-2003, Rice had become a true believer. In a speech in London that June, Rice asked “Why would anyone who shares the values of freedom seek to put a check on those values? Democratic institutions themselves are a check on the excesses of power.” “Power in the service of freedom,” said Rice, “is to be welcomed.”

A valedictory piece in Foreign Affairs in July 2008, showed what a long way she traveled in eight years, from warning, on the eve of Bush’s presidency, that an “overly broad definition of America’s national interest is bound to backfire” to now expressing her belief that “cooperation with our democratic allies … should not be judged simply by how we relate to one another. It should be judged by the work we do together to defeat terrorism and extremism, meet global challenges, defend human rights and dignity, and support new democracies.”

For Rice, “Democratic state-building is now an urgent component of our national interest.” Indeed, it is “America’s job to change the world, and in its own image.”

Today, when Rice talks about Iraq, or foreign policy in general, as she did recently with NPR’s Rachel Martin, she is given a respectful hearing. Apparently it would be a breach of decorum or the rules of the game to ask Rice whether she was concerned, embarrassed (or aware) that the Bush administration’s invasion of Iraq was ultimately responsible for the rise of ISIS.

Unchallenged, Rice is allowed to paint the war and its aftermath in the most anodyne of terms. Today, according to Rice, Iraq “has a legislature that tries to function. It has a prime minister who is accountable. … They have a very free and functioning press.” In her telling, Iraq is in many ways better now because “it’s not an authoritarian state any longer, and it’s not a totalitarian state in the way that it was under Saddam Hussein.”

And in perhaps the most astoundingly obtuse statement since Gary Johnson’s “what’s an Aleppo?” Rice told the apparently somnolent Martin that “It’s very different to be Iraqi today than to be Syrian.” Tell that to the residents of Mosul, the Iraqi city that was overrun by Islamic State extremists in 2014 and is now the scene of a bloody assault by Iraqi forces backed by U.S. and allied airstrikes.

The point here is that Rice shouldn’t be let off the hook so easily; after all, the costs of Bush’s Middle East adventures have been staggering. Ten years after the 2003 invasion, Brown University’s Cost of War project estimated that the war had killed roughly 190,000 people and cost $2.2 trillion. By 2016, the costs of the combined military actions in Iraq, Afghanistan and Pakistan had grown. According to the latest figures from the project:

–200,000 civilians have been killed as a result of the fighting at the hands of all parties to the conflict

–10.1 million — the number of war refugees and displaced persons

–The US federal price tag for the Iraq war is about 4.8 trillion dollars”

Through the years – from her time as a NSC staffer for Bush the Elder, through her disastrous tenure as NSC adviser (followed by a marginally less-bad tenure as Secretary of State) during the administration of Bush the Lesser – Rice has developed what I have called a “soft-neoconservatism” which attempts to disguise and excuse the American will to global supremacy by camouflaging it in the “soft” language of human rights.

One wonders: is there really any difference between the vacuous, happy pieties of “soft-neoconservatism” of which Rice, Hillary Clinton and Madeleine Albright are such ardent adepts, or the “hard” neoconservatism of Beltway Caesars like Sen. Tom Cotton, Robert Kagan and Elliot Abrams, or the outright militarism of the current crop of Trump appointees like Defense Secretary James Mattis and NSC adviser H.R. McMaster?

An equally urgent question as concerns Rice in particular and the Bush crowd generally: why have they suffered no serious consequences for the disastrous decisions that were made on their watch?

52 comments for “The Glorious Return of Condi Rice”