America’s expanded use of drone warfare to kill targets half a world away is spreading from a base outside Las Vegas to other state-side locales, including Syracuse, New York, as Norman Solomon discovered.

At dusk I stood on a residential street with trim lawns and watched planes approach a runaway along the other side of a chain-link fence. Just a few dozen yards away, a JetBlue airliner landed. Then a United plane followed. But the next aircraft looked different. It was a bit smaller and had no markings or taillights. A propeller whirled at the back. And instead of the high-pitched screech of a jet, the sound was more like … a drone.

During the next half-hour I saw three touch-and-go swoops by drones, their wheels scarcely reaching the runaway before climbing back above Syracuse’s commercial airport. Nearby, pilots were at the controls in front of Air Force computers, learning how to operate the MQ-9 Reaper drone that is now a key weapon of U.S. warfare from Afghanistan to the Middle East to Africa.

Since last summer the Defense Department has been using the runway and airspace at the Syracuse Hancock International Airport to train drone operators, who work at the adjoining Air National Guard base. Officials say it’s the first time that the federal government has allowed military drones to utilize a commercial airport. It won’t be the last time.

No longer will the pilots who steer drones and fire missiles while staring at computer screens be confined to remote areas like the Nevada desert. With scant public information or debate, sizable American communities are becoming enmeshed in drone warfare on other continents. Along the way, how deeply will we understand — in human terms — what the drone war is doing to people far away? And to us?

Seen But Not Seen

The takeoffs and landings of military drones at the Syracuse airport get little attention in New York’s fifth-largest city. Already routine, the maneuvers are hardly noticed. In an elevator at a hotel near the airport, I mentioned the Reaper drone exercises to an American Airlines flight attendant who had just landed on the same runway as the drones. “I had no idea,” she said.

The Reaper drones using the Syracuse runway are unarmed, the Air Force says. But when trainees go operational, their computer work includes aiming and launching Hellfire missiles at targets many thousands of miles away.

Despite the official claims that drone strikes rarely hit civilians, some evidence says otherwise. For example, leaked classified documents (obtained by The Intercept) shed light on a series of U.S. airstrikes codenamed Operation Haymaker. From January 2012 to February 2013, those drone attacks in northeast Afghanistan killed more than 200 people, but only about one-sixth of them were the intended targets.

Even without a missile strike, there are traumatic effects of drones hovering overhead. The former New York Times reporter David Rohde has described what he experienced during captivity by the Taliban in tribal areas of Pakistan: “The drones were terrifying. From the ground, it is impossible to determine who or what they are tracking as they circle overhead. The buzz of a distant propeller is a constant reminder of imminent death.”

As civic leaders in Syracuse and elsewhere embrace the expanding domestic involvement in day-to-day drone warfare, clear mention of the human toll far away is almost taboo. Elected officials join with business groups and public-relations officers from the military in extolling the benefits and virtues. Rarely does anyone acknowledge that civilians are maimed and killed as a result of the extolled activities, or that — in the name of a “war on terror” — people in foreign lands are subjected to the airborne presence of drones that is (to use Rohde’s word) “terrifying.”

Such matters are a far cry from Syracuse, where the local airport’s role in drone warfare is visible yet virtually unseen. My random conversations with dozens of Syracuse residents in many walks of life turned up scant knowledge or concern about the nearby drone operations. What’s front and center is the metropolitan area’s economic distress.

Unlike the well-financed Air National Guard base, the city’s crumbling infrastructure and budgets for relieving urban blight are on short rations. When I talked with people in low-income neighborhoods of Syracuse — one of the poorest cities in the United States — despair was often unmistakable. A major study by the Century Foundation identified Syracuse as the city with the highest concentrations of poverty among African-Americans and Hispanics in the United States. Locally, the latest influx of federal largesse is for the drone war, not for them.

A group called Upstate Drone Action has been protesting at the Air National Guard base on the outskirts of Syracuse with frequent vigils and persistent civil disobedience. A recent demonstration, on Good Friday, included nine arrests. 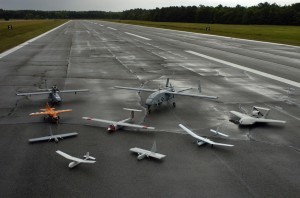 The participants said in a joint statement: “What if our country were constantly being spied upon by drones, with some of us killed by drones? What if many bystanders, including children, were killed in the process? If that were happening, we would hope that some people in that attacking country would speak up and try to stop the killing. We’re speaking up to try and stop the illegal and immoral drone attacks on countries against which Congress has not declared war.”

The last couple of months have not gone well for authorities trying to discourage civil disobedience — what organizers call “civil resistance” — at the base. In early March, a jury in the Dewitt Town Court took just half an hour to acquit four defendants on all charges from an action two years ago that could have resulted in a year behind bars for disorderly conduct, trespassing and obstruction of government administration.

Later in March, citing a lack of jurisdiction, a local judge dismissed charges against four people who set up a “nativity tableau” in front of the main gate at the Hancock Air Force Base two days before Christmas last year. In a press release, Upstate Drone Action said that the activists had been “protesting the hunter/killer MQ-9 Reaper drones piloted over Afghanistan by the 174th Attack Wing of the New York National Guard” at the base.

The U.S. drone war is escalating in numerous countries. A year ago the head of the Air Combat Command, Gen. Herbert Carlisle, told a Senate subcommittee that “an insatiable demand” was causing U.S. drone operations to grow at a “furious pace.” That pace has become even more furious since President Trump took office. In early April a researcher at the Council on Foreign Relations, Micah Zenko, calculated that President Trump had approved an average of one drone attack per day — a fivefold increase from the rate under the Obama administration.

Upstate New York is leading the way for the Pentagon’s plan to expand its drone program from isolated areas into populous communities, which offer ready access to workers. One hundred and sixty miles to the west of Syracuse, just outside the city of Niagara Falls, an Air National Guard base — the largest employer in the county — is in the final stages of building a cutting-edge digital tech center with huge bandwidth. There, pilots and sensor operators will do shifts at computer consoles, guiding MQ-9 drones and firing missiles on kill missions. The center is on track to become fully operational in a matter of months.

At the main gate of the Niagara Falls Air Reserve Station, a sergeant from the public-affairs office was upbeat about the base “operating the MQ-9 remotely piloted aircraft.” At city hall the mayor of Niagara Falls, a liberal Democrat, sounded no less pleased, while carefully sidestepping my questions about whether he could see any downsides to the upcoming drone role. A local businessman who chairs the Niagara Military Affairs Council — a private organization that has long spearheaded efforts to prevent closure of the base — told me that getting the drone mission was crucial for keeping the base open.

In such ways, functioning locally while enabling globally, the political economy and mass psychology of militarism do the work of the warfare state.

Norman Solomon is the author of War Made Easy: How Presidents and Pundits Keep Spinning Us to Death. He is a co-founder of RootsAction.org and the executive director of the Institute for Public Accuracy. This article was first published by ExposeFacts, a program of IPA.