President Trump may have been a reality-TV star but his grasp of reality has always been tenuous, underscored by his weak understanding of U.S. and world history, as Michael Winship explains.

Gene Tunney, the champion prizefighter of the 1920s, wanted to promote an image of himself as a great intellectual. Trying to prove it, he always carried in his pocket a copy of Shakespeare’s sonnets. Many members of the press weren’t buying it. When Tunney published a volume titled A Man Must Fight, one sportswriter began his story about it with this immortal line: “Gene Tunney, who has written one book and read several others…”

It’s a line that would work for Donald Trump, too, but only if flipped: “Donald Trump, who has written several books and read one other…”

Of course, his various books have been written with the considerable help of long suffering ghosts. And yes, I know that on several occasions Trump has bragged to reporters about the many books he claims to have read. In 2011, for example, he told the official Chinese news agency Xinhua, “I’ve read hundreds of books about China over the decades.” If you believe that, I’ve got a Great Wall to sell you. A real one. In China, not Mexico.

As I wrote a couple of weeks ago, one of Trump’s least appealing of many unappealing traits is his incuriosity, his total lack of interest in history or pretty much anything that somehow doesn’t pump up his ego or profits. It’s deeply dangerous for all of us.

On Monday, here he was again, the man who just claimed an unprecedented first 100 days (must have been a helluva shock to FDR), who may have thought Frederick Douglass was still alive (“somebody who’s done an amazing job”) and who seemed eager to spread the news that Abraham Lincoln was a Republican (“Does anyone know? A lot of people don’t know that!”).

When my eyes uncross and my head stops coming to a point, I’d like to read aloud to him from the Emancipation Proclamation. Trump’s remarks came as he discussed in a radio interview his oft-stated admiration for Andrew Jackson. But as Aaron Blake at The Washington Post notes, Trump pulled yet another groaner when, “Just last week, in an interview with Reuters, Trump suggested there was really no reason for the Israelis and the Palestinians to have been fighting for all these decades.

“No reason whatsoever! You know, besides the whole claim-to-the-very-same-holy-land thing. Minor details.”

It boggles the mind. My former colleague, historian David McCullough, is no stranger to American presidents, having written Pulitzer Prize-winning biographies of Harry Truman and John Adams. He has been making the rounds promoting his new book, a collection of his speeches called The American Spirit: Who We Are and What We Stand For.

When he appeared on Leonard Lopate’s talk show on New York public radio a couple of weeks ago, McCullough noted that in Donald Trump we had “put someone in the pilot seat who has never ever flown a plane before; who doesn’t understand how our government works, who has no interest in the history of the country and has said so on more than one occasion, who has never read a book about the presidency or a biography of a president and claims… that he doesn’t need to read books because he knows so much intuitively.”

And yet when Trump declares that health care reform or pretty much anything else — in fact the entire job of being president — is much more complicated than he imagined it would be, it’s precisely because he has no knowledge of history, the kind of knowledge that might at least from time to time buffer for him the shock of reality by offering the golden gift of precedence.

History, McCullough writes, is “an aid to navigation in such troubled uncertain times. … All problems have histories and the wisest route to a successful solution to nearly any problem begins with understanding its history. Indeed, almost any attempt to solve a problem without an understanding of its history is to court failure — an example our tragic plunge into Vietnam with hardly a notion of its past.”

Or our plunge into Iraq. Or Afghanistan. Or Iran. Or North Korea — especially when the sum total of Trump’s knowledge of that country’s fraught history seems to have been a 10-minute tutorial from the president of China.

History is that proverbial butterfly flapping its wings in Mexico and causing a tsunami in Malaysia. Which makes it all the more perilous when you have a president who uses “America First” as a campaign slogan, revealing little knowledge of the isolationist movement before World War II; whose press secretary makes ill-considered statements comparing Nazi Germany, Syria and the use of poison gas to massacre civilians; and who calls Sen. Elizabeth Warren “Pocahontas,” demonstrating a willful, repugnant ignorance of Native American history that goes all the way back to a time some 24 years ago when he claimed owners of tribal casinos “are not Indians” because they didn’t conform to his stereotype of what Native Americans should look like.

But even worse than any of these is a lack of knowledge of history and government that puts our very existence as a free and democratic government in peril. Embracing other countries’ dictators is one slippery slope. And then on Sunday there was Trump’s chief of staff Reince Priebus suggesting to Jonathan Karl of ABC News that his boss is contemplating amending or even eliminating the First Amendment to curb negative coverage of the president. And finally, there was Trump himself, complaining to Fox News about the difficulty of getting his program through Congress: “It’s a very rough system. It’s an archaic system… It’s really a bad thing for the country.” 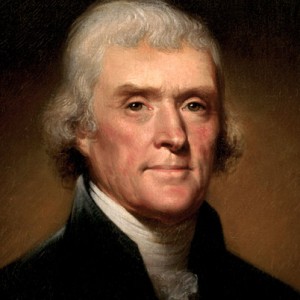 President Thomas Jefferson in a portrait by Rembrandt Peale.

In other words, history, the system of checks and balances and the Constitution itself are just getting in Trump’s way, despite his prior claims to regard as inviolate the original language of the founders.

Trump and his minions seem determined to send the admittedly flawed masterwork that is our legacy to the trash. One of David’s favorite quotes comes from Thomas Jefferson: “If a nation expects to be ignorant and free in a state of civilization, it expects what never was and never will be.”

Sadly, those words are probably unfamiliar to Trump precisely because of what Jefferson suggested. Past presidents have embraced our past as prologue, read books, invited eminent historians to the White House for advice and consultation. But Trump takes his history, as little as it is, from the dark spoutings of pseudointellectuals like Steve Bannon and Sebastian Gorka, or in tweets and soundbites from Fox & Friends. When he tries to parrot the words back as public statements, they come out even more mangled and malevolent.

While he is so ignorant we cannot be free.

Michael Winship is the Emmy Award-winning senior writer of Moyers & Company and BillMoyers.com. Follow him on Twitter at @MichaelWinship. [http://billmoyers.com/story/dont-know-much-about-history/]