President Trump’s tax-cut plan charts a bonanza for himself, his friends and his family, getting rid of taxes that bite the rich and leaving debts behind for future American generations to pay, say Bill Moyers and Michael Winship.

Republican Calvin Coolidge, who in 1923 ascended to the presidency following the death of the corrupt and dunderheaded Warren Harding, was a man of few words. But some of the most famous of the few were, “The chief business of the American people is business.” 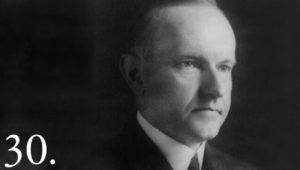 Donald Trump, on the other hand, is often a man of many words, but rarely do they fit together to make a coherent sentence or complete thought. And we know for sure that he, too, believes the chief business of America is business, especially when it’s his business. Oh, and Jared and Ivanka’s, whose junkets on Dad’s behalf appear to be merchandising missions for The Trump Empire. And his two safari-loving sons still holding forth from the family palace in New York, putatively running Pop’s business while protected by a moat of barriers and security guards — take that, you huddled masses.

Coolidge was known as “Silent Cal.” When a dinner party hostess told him, “You must talk to me, Mr. Coolidge. I made a bet today that I could get more than two words out of you,” Coolidge replied, “You lose.” The last thing our current president would be described as is silent. Trump can’t stop tweeting and gibbering. And he doesn’t like losers.

The taciturn Coolidge has been described as the most conservative president in American history. No one is quite certain what Trump is, as his opinions and moods shift depending on the last person to whom he has spoken or something he’s just seen on Fox & Friends or heard from conspiracy theorist Alex Jones. They point rightward for sure, but as with so many conservative spokesmen these days, tinged with lunacy and utterly devoid of reason.

And yet there on the august pages of The New York Times, Charles R. Kesler, a senior fellow of the right-wing Claremont Institute, gushes:

“Mr. Trump remains the kind of conservative president whom one expects to say, proudly and often, ‘the chief business of the American people is business.’ Although Calvin Coolidge said it first, Mr. Trump shows increasing signs of thinking along broadly Coolidgean lines, and of redirecting Republican policies toward the pre-New Deal, pre-Cold War party of William McKinley and Coolidge, with its roots in the party of Abraham Lincoln.”

Oh brother. Professor Kesler is projecting onto Trump a consistency of thought and belief that thus far seems unproven. Comparing him to McKinley is a stretch, and to Lincoln — well, absurd. Really now, does this remotely sound like Donald Trump?

“We are not enemies, but friends. We must not be enemies. Though passion may have strained it must not break our bonds of affection. The mystic chords of memory, stretching from every battlefield and patriot grave to every living heart and hearthstone all over this broad land, will yet swell the chorus of the Union, when again touched, as surely they will be, by the better angels of our nature.”

On the one hand, Kesler’s adoration of Trump makes sense, given that last September it was the Claremont Institute that published a pseudonymous and now-notorious essay titled “The Fight 93 Election,” basically telling conservative Republicans that if they did not support Trump’s presidential candidacy, their world was doomed.

Clunky pearls of wisdom from what passes today for conservatism. Where have you gone, George Will, now that they need you? Next thing we know, Ann Coulter will be running the Library of Congress.

Calvin Coolidge would never have gone for such histrionics. Yet it’s worth taking a moment to consider what did occur during his administration. His years in office were the height of “The Roaring ’20s” — a time of economic whoopee marked by wild financial speculation, extravagant bank loans and debt that contributed to the 1929 market crash and the Great Depression.

Coolidge himself was the epitome of frugality and respectability but like Donald Trump (who fancies himself “the king of debt,” by the way — a real conservative, no?) he favored enormous tax cuts, slashing spending, high tariffs on imports and cramming regulatory agencies with pro-business types.

Unlike Trump, he favored a low profile and as far as policy goes preferred inertia to action. Here’s what the noted columnist Walter Lippmann said at the time: “This active inactivity suits the mood and certain of the needs of the country admirably. It suits all the business interests which want to be let alone…. And it suits all those who have become convinced that government in this country has become dangerously complicated and top-heavy….”

At that last part, you can just see all Trump’s plutocratic Cabinet members and advisors nodding their heads in vigorous agreement.

When he died, Calvin Coolidge’s net worth was less than a million in 2016 dollars and he left it all to his wife Grace. Trump, who says his net worth may be as much as $10 billion (how can we hope to know if he won’t release his tax returns?), and his family are using the White House to make the family fortune multiply, as if the presidency were a perpetual goose laying golden eggs. Each news cycle brings more stories of conflicts of interest, and the tax cut plan announced on Wednesday is a sweeping bow to the rich.

“It is striking,” Neil Irwin at The New York Times noted, how much the proposal favors Trump and his kin: “He is a high-income earner. He receives income from 564 business entities, according to his financial disclosure form, and could take advantage of the low rate on ‘pass-through’ companies. According to his leaked 2005 tax return, he paid an extra $31 million because of the alternative minimum tax that he seeks to eliminate. And his heirs could eventually enjoy his enormous assets tax-free.”

So conservatism under Trump and his cronies now running government has brought back a revised version of the gold standard: How much gold you can mine from privatizing the mother lode of government is the mark of your success.

No wonder Trump admires Vladimir Putin so much: They are the Midas and Ali Baba of autocracy. But conservatives they are not, unless to conservatives greed has become the coin of the realm.

One more thing: President Trump doesn’t sleep much at night, reportedly getting about five hours of shut-eye (obviously, the cause is not a guilty conscience). President Coolidge loved to sleep, as much as twelve hours at a time. When he awoke from a White House nap he often would ask his butler, “Is the country still there?”

He meant it as a joke. Today, the question isn’t funny.