Exclusive: An insider book on Campaign 2016 reveals a paranoid Hillary Clinton who spied on staff emails after losing in 2008 and carried her political dysfunction into her loss to Donald Trump, writes Robert Parry.

An early insider account of Hillary Clinton’s presidential campaign, entitled Shattered, reveals a paranoid presidential candidate who couldn’t articulate why she wanted to be President and who oversaw an overconfident and dysfunctional operation that failed to project a positive message or appeal to key voting groups.

Okay, I realize that people who have been watching Rachel Maddow and other MSNBC programs – as well as reading The New York Times and The Washington Post for the past four months – “know” that Clinton ran a brilliant campaign that was only derailed because of “Russian meddling.” But this insider account from reporters Jonathan Allen and Annie Parnes describes something else.

As The Wall Street Journal review notes, the book “narrates the petty bickering, foolish reasoning and sheer arrogance of a campaign that was never the sure thing that its leader and top staffers assumed. … Mr. Allen and Ms. Parnes stress two essential failures of the campaign, the first structural, the second political. The campaign’s structure, the authors write, was an ‘unholy mess, fraught with tangled lines of authority, petty jealousies, and no sense of greater purpose.’”

The book portrays Hillary Clinton as distant from her campaign staff, accessible primarily through her close aide, Huma Abedin, and thus creating warring factions within her bloated operation.

According to the Journal’s review by Barton Swaim, the book’s authors suggest that this chaos resulted from “the fact that Mrs. Clinton didn’t know why she wanted to be president. At one point no fewer than 10 senior aides were working on her campaign announcement speech, not one had a clear understanding of why Americans should cast their vote for Mrs. Clinton and not someone else. The speech, when she finally delivered it, was a flop – aimless, boring, devoid of much beyond bromides.”

The book cites a second reason for Clinton’s dismal performance – her team’s reliance on analytics rather than on reaching out to real voters and their concerns.

There is also an interesting tidbit regarding Clinton’s attitude toward the privacy of her staff’s emails. “After losing to Mr. Obama in the protracted 2008 primary,” the Journal’s review says, Clinton “was convinced that she had lost because some staffers – she wasn’t sure who – had been disloyal. So she ‘instructed a trusted aide to access the campaign’s server and download the [email] messages sent and received by top staffers.’”

In other words, Clinton – in some Nixonian fit of paranoia – violated the privacy of her senior advisers in her own mole hunt, a revelation that reflects on her own self-described “mistake” to funnel her emails as Secretary of State through a private server rather than a government one. As the Journal’s review puts it: “she didn’t want anyone reading her emails the way she was reading those of her 2008 staffers.”

But there is even a greater irony in this revelation because of the current complaint from Clinton and her die-hard supporters that Russia sabotaged her campaign by releasing emails via WikiLeaks from the DNC, which described how party leaders had torpedoed the campaign of Clinton’s rival for the nomination, Sen. Bernie Sanders, and other emails from her campaign chairman John Podesta, revealing the contents of Clinton’s paid speeches to Wall Street banks and some pay-to-play features of the Clinton Foundation.

WikiLeaks has denied that it received the emails from Russia – and President Obama’s outgoing intelligence chiefs presented no real evidence to support the allegations – but the conspiracy theory of the Trump campaign somehow colluding with the Russians to sink Clinton has become a groupthink among many Democrats as well as the mainstream U.S. media.

So, rather than conducting a serious autopsy on how Clinton and the national Democratic Party kicked away a winnable election against the buffoonish Donald Trump, national Democrats have created a Zombie explanation for their failures, blaming their stunning defeat on the Russians.

This hysteria over Russia-gate has consumed the first several months of the Trump presidency – badgering the Trump administration into a more belligerent posture toward nuclear-armed Russia – but leaving little incentive for the Democrats to assess what they need to do to appeal to working-class voters who chose Trump’s empty-headed populism over Clinton’s cold-hearted calculations.

The current conventional wisdom among the mainstream media, many Democrats and even some progressives is that the only way to explain the victory by pussy-grabbing Trump is to complain about an intervention by the evil Russians. Maybe Maddow and the other Russia-did-it conspiracy theorists will now denounce Shattered as just one more example of “Russian disinformation.”

The New York Times’ review by Michiko Kakutani also notes how Shattered details Clinton’s dysfunction, but the newspaper inserted a phrase about “Russian meddling,” presumably to avoid a head-exploding cognitive dissonance among its readers who have been inundated over the past four months by the Times’ obsession on Russia! Russia! Russia! 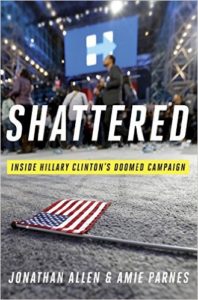 However, the Times’ review still focuses on the book’s larger message: “In fact, the portrait of the Clinton campaign that emerges from these pages is that of a Titanic-like disaster: an epic fail made up of a series of perverse and often avoidable missteps by an out-of-touch candidate and her strife-ridden staff that turned ‘a winnable race’ into ‘another iceberg-seeking campaign ship.’

“It’s the story of a wildly dysfunctional and ‘spirit-crushing’ campaign that embraced a flawed strategy (based on flawed data) and that failed, repeatedly, to correct course. A passive-aggressive campaign that neglected to act on warning flares sent up by Democratic operatives on the ground in crucial swing states, and that ignored the advice of the candidate’s husband, former President Bill Clinton, and other Democratic Party elders, who argued that the campaign needed to work harder to persuade undecided and ambivalent voters (like working-class whites and millennials), instead of focusing so insistently on turning out core supporters.”

So, perhaps this new book about how Hillary Clinton really lost Campaign 2016 will enable national Democrats to finally start charting a course correction before the party slams another Titanic-style campaign into another iceberg.