After blocking President Obama’s Supreme Court nominee for the past year, the Republicans got President Trump to put up a soft-spoken but hard-line right-winger in Judge Neil Gorsuch, as Marjorie Cohn described for Truthdig.

When Donald Trump’s chief of staff Reince Priebus addressed the Conservative Political Action Committee in February, he identified two priorities of the administration: the confirmation of Neil Gorsuch to the Supreme Court, and deregulation. 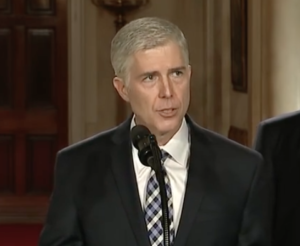 U.S. Supreme Court nominee Neil Gorsuch speaking at the announcement of his selection on Jan. 31, 2017. (Screen shot from Whitehouse.gov)

It turns out that elevating Gorsuch to the Supreme Court and achieving deregulation are inextricably linked. During Gorsuch’s confirmation hearing, Democratic members of the Senate Judiciary Committee challenged him on his pro-business positions.

Minnesota Sen. Al Franken pressed him on a case — that of the now-infamous “frozen trucker” — in which the judge reached what Franken characterized as an “absurd” result. Alphonse Maddin was driving a truck for TransAm Trucking Inc. in 2009 when the brakes froze on the trailer he was hauling. The heater inside the truck wasn’t working, and the temperature outside was minus 27 below zero.

Maddin contacted his employer, who arranged for a repair unit to come to Maddin’s location. While waiting for help to arrive, Maddin nodded off.

“I awoke three hours later to discover that I could not feel my feet, my skin was burning and cracking, my speech was slurred, and I was having trouble breathing,” he said at a recent event in Washington, D.C. When Maddin stepped out of the truck, he said he “was on the verge of passing out. I feared that if I fell, I would not have the strength to stand up and would die.” Maddin was exhibiting symptoms of hypothermia. He called his employer again to report that he was leaving to seek shelter. His supervisor ordered him “to either drag the trailer [with no brakes] or stay put.”

“In my opinion, clearly, their cargo was more important than my life,” Maddin said.

Faced with defying his employer’s order to remain with his disabled trailer or freezing to death, Maddin chose to unhitch the trailer and drive his truck to safety. TransAm fired Maddin for disobeying orders, and he filed a complaint with the Occupational Safety and Health Administration, an agency of the Department of Labor. The operative statute in this case forbids employers from firing an employee who “refuses to operate a vehicle because the employee has a reasonable apprehension of serious injury to the employee or the public.”

The Labor Department found that TransAm had violated the law, concluding that the word “operate” includes not only driving, but also “other uses of a vehicle when it is within the control of the employee.” Maddin had refused to operate his vehicle in the manner his employer had ordered — with the trailer hitched to the truck.

Of the seven judges who ultimately ruled on the case, Gorsuch was the only one who voted to uphold Maddin’s firing. He decided that Maddin did “operate” his vehicle, which took him outside the statutory language that protects an employee who refuses to operate his vehicle.

What source did Gorsuch consult to construe the word “operate?” He turned to the Oxford English Dictionary, refusing to defer to the Department of Labor’s broader interpretation of the statute. Gorsuch characterized “health and safety” concerns as “ephemeral and generic,” writing, “After all, what under the sun, at least at some level of generality, doesn’t relate to ‘health and safety’?”

In his dissent, Gorsuch, who displayed a smooth, compassionate persona while testifying at his hearing, described the conditions Maddin faced as merely “cold weather.” He wrote that for Maddin to sit and wait for help to arrive was an “unpleasant option.”

Maddin’s lawyer, Robert Fedder, told Democracy Now!’s Amy Goodman that during oral argument before the appellate panel, “Judge Gorsuch was incredibly hostile.” Fedder noted, “I’ve litigated many cases in appellate courts … [Gorsuch] may have been the most hostile judge I’ve ever appeared before.”

Maddin, who is African-American, later said, “The first thing I noticed was that in his opening reference [in his dissent, Gorsuch] simply called me a trucker and didn’t use my name.” Maddin told The Guardian, “In my heart of hearts, I felt like he willfully tried to negate the human element of my case.”

At Gorsuch’s confirmation hearing, Illinois Sen. Dick Durbin discussed Maddin’s case with Gorsuch, saying that the temperature was minus 14 that night, “but not as cold as your dissent.”

In Gorsuch’s dissenting opinion, he refused to defer to the Department of Labor’s interpretation of the statutory language regarding refusal to operate. Gorsuch was, in effect, refusing to apply the well-established “Chevron deference.”

This doctrine requires that when a law is ambiguous, courts must defer to an agency’s reasonable construction of the statute. Even the late Supreme Court Justice Antonin Scalia, to whom Gorsuch is often compared, thought that agencies were in the best position to construe regulations that inform their work.

If Gorsuch had his druthers, he would do away with Chevron deference. In fact, he stated as much in his lengthy concurrence in Gutierrez-Brizuela v. Lynch, in which he wrote, “Maybe the time has come to face the behemoth.”

Gorsuch would substitute his own interpretation for that of an agency. But agencies are in the best position to make these determinations about matters within their purview.

In opposing Gorsuch’s nomination to the high court, the nonprofit organization Alliance for Justice wrote of the dangers of second-guessing agency experts: “It is difficult to overstate the damage [Gorsuch’s] position would cause. Judge Gorsuch would tie the hands of precisely those entities that Congress has recognized have the depth and experience to enforce critical laws, safeguard essential protections, and ensure the safety of the American people.”

Courts that have given deference to agency interpretations ensured essential protections, including:

–Deferring to the Department of Labor’s interpretation of portions of the Black Lung Benefits Act that make it easier for coal miners afflicted with black lung disease to receive compensation; and

–Deferring to the EPA’s revision of regulations under the Toxic Substances Control Act that provide more protection from exposure to lead paint.

On Jan. 20, Priebus directed agency heads to refrain from sending new regulations to the Office of the Federal Register until there are administration officials in place to approve them.

On Jan. 24, Trump signed a memo directing his Secretary of Commerce to review the ways in which federal regulations affect U.S. manufacturers in order to reduce as many of them as possible.

On Jan. 30, Trump issued an executive order requiring the mechanistic elimination of two regulations for every new one, and capping spending on new regulations during 2017 at zero.

On Feb. 3, Trump signed an executive order rolling back Dodd-Frank regulations on Wall Street. This will increase the risk of another dangerous recession.

During the confirmation hearing, Franken confronted Gorsuch with the confluence of his confirmation to the Supreme Court and the deconstruction of the administrative state (deregulation), saying,

“[F]or those who subscribe to President Trump’s extreme view, [the Chevron doctrine] is the only thing standing between them and what the President’s chief strategist Steve Bannon called the ‘deconstruction of the administrative state,’ which is shorthand for gutting any environmental or consumer protection measure that gets in the way of corporate profit margins.

“Speaking before a gathering of conservative activists last month, Mr. Bannon explained that the President’s appointees were selected to bring about that deconstruction, and I suspect that your nomination, given your views, is part of that strategy.”

Deregulation serves the interests of big business, a key conservative goal. When questioned at his hearing about what ideology he would bring to the court, Gorsuch made the disingenuous claim, “There’s no such thing as a Republican judge or a Democratic judge. We just have judges in this country.”

If that were true, why are the Heritage Foundation and the Federalist Society so keen on Gorsuch? He was on a list prepared by the two right-wing groups from which Trump dutifully selected his Supreme Court nominee.

“The president outsourced your selection to far right, big money interest groups, and they have an agenda. They’re confident you share their agenda. That’s why they called you ‘a nominee who understands things like we do,’ ” Sen. Patrick Leahy, D-Vermont, told Gorsuch at his hearing.

Why has $10 million in “dark money” been spent by anonymous conservative donors to buy Gorsuch a seat on the high court, as Sen. Sheldon Whitehouse, D-Rhode Island, charged at the hearing? And why, as Whitehouse added, was $7 million expended on the unprecedented, but successful, campaign to deny Barack Obama’s nominee Merrick Garland a hearing?

Gorsuch is a staunch, longtime conservative judge who, in spite of his refusal to tip his hand about his ideology, has taken positions that confirm his right-wing bona fides. When Sen. Chuck Schumer, D-New York, announced he would vote against Gorsuch’s nomination, he stated that Gorsuch had ruled repeatedly for employers and against workers.

Gorsuch “almost instinctively favors the powerful over the weak,” Schumer said, adding, “We do not want judges with ice water in their veins,” an apt analogy in light of Gorsuch’s dissent in the TransAm case.

Marjorie Cohn is professor emerita at Thomas Jefferson School of Law, former president of the National Lawyers Guild and deputy secretary general of the International Association of Democratic Lawyers. Her books include The United States and Torture: Interrogation, Incarceration, and Abuse; Cowboy Republic: Six Ways the Bush Gang Has Defied the Law and Drones and Targeted Killing: Legal, Moral, and Geopolitical Issues. Visit her website: MarjorieCohn.com. Follow her on Twitter: @MarjorieCohn. [This article first appeared at Truthdig, http://www.truthdig.com/report/item/neil_gorsuch_and_the_deconstruction_of_the_administrative_state_20170326 ]