A surge in hateful speech toward minorities in the Age of Trump has been met by  a pushback from angry activists, sometimes trampling the vital principle of free and open debate, writes Michael Winship.

At the risk of sounding like a geezer complaining about “these kids today,” back in my college days, when it came to points of view we were unhesitatingly exposed to literature, teachers and on-campus speakers covering the ideological waterfront. 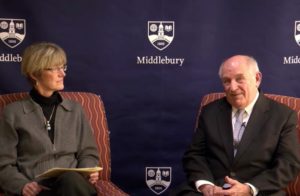 In one instance, the student body was addressed by civil rights activist and comedian Dick Gregory, radical Irish activist Bernadette Devlin and the conservative writer and critic Russell Kirk — all in the course of a week or so.

Such variety was a common occurrence, and freewheeling, open discussion was encouraged. We didn’t always like or agree with a lot of what we heard or read — from time to time there were vehement protests — but all of it was invaluable. None of us were harmed in the making of our education.

So I was appalled other day when I read about the attempt by Republican Arkansas legislator Kim Hendren to ban from that state’s public schools all books written by the great radical historian Howard Zinn, including his seminal A People’s History of the United States, a truthful, lacerating look at the heroes and villains of America — especially the oligarchs and kleptocrats who once again have their heels on the necks of the poor and middle class.

But I also was deeply troubled by the incident at Vermont’s Middlebury College on March 2, when controversial social scientist Charles Murray was invited by a conservative student group and attempted to speak on campus. Here’s what happened, according to the Associated Press:

“Hundreds of students chanted as Murray began to speak Thursday, forcing the college to move the lecture to an undisclosed location. Murray’s talk was live-streamed to the original venue, but protesters drowned it out. The topic, he said, was the divergence of the country’s culture into a new upper class separated from mainstream America.

“Afterward, a group of protesters surrounded Murray, professor Allison Stanger and college administrator Bill Burger as they were leaving, he said. The protesters became violent, with one pulling Stanger’s hair, twisting her neck, the college said.

“After Murray and the two Middlebury staff members got into a car to leave, protesters banged on the windows, climbed onto the hood and rocked the vehicle, the college and Murray said.”

Professor Stanger, by the way, went to the ER and was subsequently diagnosed with concussion. She’s a respected political scientist at Middlebury and a fellow at the progressive New America, and was there the other night because the conservative student group had asked her to provide a counterpoint to Murray’s speech, to interview him from the stage after his prepared remarks. She had prepared some tough, challenging questions.

Many of Charles Murray’s opinions are indeed odious and his research highly questionable, He was co-author of The Bell Curve, a notorious book that seemed to link race and IQ. He describes himself as a libertarian, but the Southern Poverty Law Center (SPLC) calls him a white nationalist and reports: 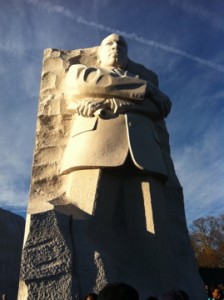 “According to Murray, the relative differences between the white and black populations of the United States, as well as those between men and women, have nothing to do with discrimination or historical and structural disadvantages, but rather stem from genetic differences between the groups… Murray’s attempts to link social inequality to genes are based on the work of explicitly racist scientists.”

At the beginning of Murray’s attempt to speak at Middlebury, students turned their backs to him and chanted in protest. I probably would have done the same. But to not let him speak and to allow the protests to lead to violence is inexcusable.

I realize that this raises all sorts of questions about freedom of speech and academic liberty, the nature of dissent and when and if political violence is ever justified, but looking at what happened coolly — and admittedly, from a distance — it seems clear that this went far beyond the boundaries of civil discourse that especially today must be defended against the barbarians who already have run roughshod, pushing through the gates and seizing the reins of power and governance.

Professor Stanger said it best herself. She wrote:

“To people who wish to spin this story as one about what’s wrong with elite colleges and universities, you are mistaken. Please instead consider this as a metaphor for what is wrong with our country, and on that, Charles Murray and I would agree. This was the saddest day of my life. We have got to do better by those who feel and are marginalized. Our 230-year constitutional democracy depends on it, especially when our current President is blind to the evils he has unleashed. We must all realize the precious inheritance we have as fellow Americans and defend the Constitution against all its enemies, both foreign and domestic. That is why I do not regret my involvement in the event with Dr. Murray.”

I can be as guilty as the next person about tuning out and trying to ignore the voice of someone with whom I vehemently disagree. I know, too, that this indeed is a time to speak out against the ignorance and despotism sweeping our nation. Further, I realize that the religious, racial and homophobic hate crimes that have been on the upswing since Donald Trump’s candidacy and election — and increased in 2016 for the second year in a row according to the Southern Poverty Law Center — far exceed in numbers and intensity any violence or brutishness that has occurred on college campuses. No question that they’re more frightening and dangerous.

But, in the words of Andrew Sullivan, “Universities are the sanctuary cities of reason. If reason must be subordinate to ideology even there, our experiment in self-government is over.”

Two sides of the same coin: whether the Trump White House or those who would physically attack a college professor. Their unthinking, unyielding enslavement to a single viewpoint is fatal.

Ignorance begets ignorance and hate begets hate. And like a virus, each can infect without regard to race, gender, creed or political perspective. At a time when those in charge are fueling a pandemic of intolerance we must make sure not to succumb ourselves.

Michael Winship is the Emmy Award-winning senior writer of Moyers & Company and BillMoyers.com. Follow him on Twitter at @MichaelWinship. [This article originally appeared at http://billmoyers.com/story/free-speech-ends-ignorance-begins/]

15 comments for “Testing the Principle of Free Speech”