On Feb, 27, Consortiumnews.com published an article describing misrepresentations by Canada’s new Foreign Minister Chrystia Freeland about her Ukrainian maternal grandfather whom she has portrayed as a hero who struggled “to return freedom and democracy to Ukraine” but left out that he was a Nazi propagandist whose newspaper justified the slaughter of Jews. 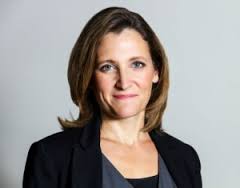 Over the next week, the article entitled “A Nazi Skeleton in the Family Closet” by journalist Arina Tsukanova (which I personally edited and fact-checked) circulated enough that Freeland was asked about it by the Canadian news media. As often happens these days, Freeland chose not to tell the truth but rather portrayed the article as part of a Russian propaganda and disinformation campaign.

Freeland told reporters, “I don’t think it’s a secret. American officials have publicly said, and even [German Chancellor] Angela Merkel has publicly said, that there were efforts on the Russian side to destabilize Western democracies, and I think it shouldn’t come as a surprise if these same efforts were used against Canada. … I think that Canadians and indeed other Western countries should be prepared for similar efforts to be directed at them.”

Though Freeland did not comment directly on the truthfulness of our article, her office denied that her grandfather was a Nazi collaborator.

Other leaders of Prime Minister Justin Trudeau’s government joined in the counterattack. Citing the danger of Russian disinformation, Public Safety Minister Ralph Goodale, said, “The situation is obviously one where we need to be alert.”

In an article on March 6, Canada’s Globe and Mail also rallied to Freeland’s defense claiming that she was “being targeted by allegations in pro-Moscow websites that her maternal Ukrainian grandfather was a Nazi collaborator.”

The newspaper also reached out to other experts to add their denunciations of Consortiumnews.com and other news sites that either reposted our story or ran a similar one.

“It is the continued Russian modus operandi that they have. Fake news, disinformation and targeting different individuals,” said Paul Grod, president of the Canadian Ukrainian Congress. “It is just so outlandish when you hear some of these allegations – whether they are directed at minister Freeland or others.”

The Globe and Mail also quoted Ukraine’s ambassador to Canada, Andriy Shevchenko, citing our supposedly fake news as “another reason … we should realize that Russia is waging a war against the free world. It is not just about Ukraine.”

The ambassador then offered some advice about standing up to the Russians and their disinformationists: “I am absolutely sure they will seek new targets in the free world so I would encourage our Canadian friends to be prepared for that, to stay strong and we will be happy to share our experience in how to deal with all these information wars.”

The only problem with all these righteous condemnations was that the information about Freeland’s grandfather was true – and Freeland knew that it was true. 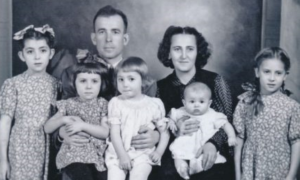 Michael Chomiak and wife Alexandra, with their children in Canada in 1952. Freeland’s mother Halyna is second from left.

In a second-day story, The Globe and Mail had to revisit the issue, reporting that “Freeland knew for more than two decades that her maternal Ukrainian grandfather was the chief editor of a Nazi newspaper in occupied Poland that vilified Jews during the Second World War.”

In other words, not only was our story accurate but Freeland knowingly launched a deceptive attack on us and other news outlets to punish us for writing the truth.

And not only was our story correct but it was newsworthy, given Freeland’s fierce support for Ukrainian nationalism and her deep hatred of Russia. Canadians have a right to know what drives those passions in their Foreign Minister. In this case, her worldview derived from her grandparents who sided with Adolf Hitler and who fled to the West as the Soviet Red Army defeated the Nazis.

Yet, instead of fessing up and acknowledging these facts, Freeland chose to dissemble and slander journalists who were doing their job. And the smears didn’t entirely stop.

Even as the Globe and Mail admitted the reality about Freeland’s grandfather, it continued to disparage the journalists who had exposed the facts. The second line of the newspaper’s second-day article read: “Ms. Freeland’s family history has become a target for Russian forces seeking to discredit one of Canada’s highly placed defenders of Ukraine.”

This pattern has become all too common in the West, to insult and discredit anyone who doesn’t accept the “groupthinks” about the New Cold War. Just as the major news media marched in lockstep over the Iraq-WMD falsehoods, so it has been toeing the line on the hysteria over supposed “Russian propaganda” and “fake news.”

In its second bite at the apple, the Globe and Mail noted that “Ms. Freeland, who has paid tribute to her maternal grandparents in articles and books, helped edit a scholarly article in the Journal of Ukrainian Studies in 1996 that revealed her grandfather, Michael Chomiak, was a Nazi propagandist for Krakivski Visti (Krakow News). 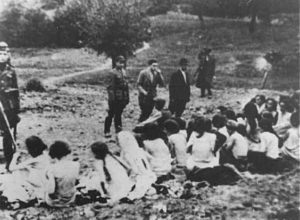 Jewish women lined up waiting to be shot at Babi Yar, September 1941

“Krakivski Visti was set up in 1940 by the German army and supervised by German intelligence officer Emil Gassert. Its printing presses and offices were confiscated by the Germans from a Jewish publisher, who was later murdered at the Belzec concentration camp.” All of that was reported in our Feb. 27 article.

The Journal of Ukrainian Studies article was written by Freeland’s uncle, John-Paul Himka, a professor emeritus at the University of Alberta, who credits help from Freeland in the foreword. However, as the Globe and Mail wrote, “Ms. Freeland has never acknowledged that her grandfather was a Nazi collaborator and suggested on Monday that the allegation was part of a Russian disinformation campaign.”

Some members of Freeland’s family have tried to recast the storyline to portray Chomiak as something of a double agent, but Himka said he was never able to verify this information, which he called “fragmentary and one-sided,” the Globe and Mail reported.

Himka added that he never knew that Chomiak had worked for the Nazis until after his father-in-law died and left behind copies of Krakivski Visti in his personal papers.

The day after her initial comments on our article, Freeland’s office offered a brief statement: “Dating back many years, the Minister has supported her uncle’s efforts to study and publish on this difficult chapter in her late grandfather’s past.”

But Freeland, who has a background as a journalist herself, did not explain why she chose initially to dissemble about her grandfather and to slander journalists who were telling the truth.