At a recent book signing at the Hoover Institute in Washington, D.C., for How America Lost Its Secrets: Edward Snowden, the Man and the Theft, Epstein proudly announced that he learned the tricks of the counterintelligence trade from the now-deceased Angleton.

But Angleton, like other counterintelligence sleuths, assumed the carte-blanche right to smother a slender fact with weighty assumptions and then weave upon them a hefty garment of allegations, speculation and imagination fitting with the occupational predisposition to detect a spy.

Over the decades, it’s conceivable that this “methodology” may have caught a spy or two (although Angleton is perhaps best known for missing the notorious Soviet spy Kim Philby). But creating a counterfactual, evidence-free scenario seems an irresponsible way to write about Edward Snowden, a whistleblower responsible for the most consequential intelligence leak in U.S. history.

In his new book, Epstein spins his intricate web to prove Snowden’s supposed treachery around the fact that after leaking secrets to Western journalists in Hong Kong, Snowden wound up in Russia. The well-known reality is that Snowden never intended to get stuck in Russia but was stranded there when the U.S. government blocked his path to South America. Yet, however clear the record regarding how and why Snowden found asylum there, Epstein sees a more sinister logic.

As a veteran of the Central Intelligence Agency and a private citizen who has befriended many government whistleblowers, I happen to have known Angleton and currently know Snowden (whom I count among my friends).

I recall in 1974, when CIA Director William Colby finally fired Angleton, audible sighs of relief rippled through spydom. Angleton had ruined the careers – and sometimes the lives – of many conscientious CIA officers. When, finally, Angleton was not in position to do any more damage, many of my contemporaries recounted personal examples of how misguided and harmful Angleton’s periodic witch hunts had been.

Like Angleton, Epstein also has a tendency to see spies where they aren’t, including asserting that Lee Harvey Oswald was a Soviet spy, a claim that finds zero support in the KGB records now available. That proclivity is also evident in Epstein’s new book.

Squeezing in a Question

But I did squeeze a question in at the Hoover book event. Epstein’s interviewer, Ben Witte of Brookings, had served up a few innings-worth of softball pitches but allowed no questions from the audience. However, when Epstein claimed that his best source on Snowden’s perfidy was Russian President Vladimir Putin, whom Epstein proceeded to quote – incorrectly – to the effect that Snowden had met with Russian officials in Hong Kong. I spoke out, saying, “Putin did not say that.” 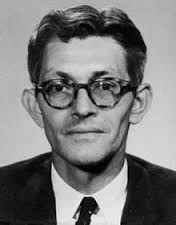 Shock hit the audience at my impertinence, and Witte’s eyes scoured the back of the room apparently looking for Security. But the ever-genteel Epstein saved the day by admitting that I was right and that he had misspoken.

After the Witte-Epstein dialogue, the audience was allowed to approach Epstein for conversation. I introduced myself and noted that I had joined other former intelligence officers in visiting Snowden in Moscow.

“Oh, yes, I remember your name,” Epstein said, prompting me to ask why he did not seek to interview me for the book. “Yes, I should have contacted you,” he said with a smile.

At the time I was unaware of the curious limits Epstein had put on his outreach. Besides those of us who had met with Snowden in Moscow, Epstein “should have contacted” Sarah Harrison, who stayed by Snowden’s side during his five weeks at Moscow’s Sheremetevo Airport and then for a few additional months; Julian Assange, who pulled out all the stops to facilitate Snowden’s sudden and safe departure from Hong Kong; NSA whistleblowers William Binney, Kirk Wiebe and Ed Loomis; and Diane Roark, House Intelligence Committee senior aide who had the NSA account for several years.

Epstein’s book shows that – while ignoring people who know Snowden or have had painful experiences trying to expose NSA wrongdoing by going through the “proper channels” – he conducted many interviews with people who consider Snowden, as well as Putin, the devil incarnate.

There is also the issue of how much actual “damage” Snowden’s disclosures caused. According to former NSA Technical Director William Binney, it is fair to say that the extent of the NSA’s vacuuming up of bulk data on Americans and people around the world was a surprise, first and foremost, to Americans whose eyes were opened (as Snowden intended); that U.S. adversaries were generally aware of NSA’s capabilities; and that damage to sources and methods typically has been exaggerated by those interested in overstating it.

Here there are shades of the alarmist complaints about the supposed damage caused by the disclosures about the wars in Afghanistan and Iraq from Pvt. Chelsea (formerly Bradley) Manning.

After Defense Secretary Robert Gates had joined other senior officials in lamenting the “grave damage” from Manning’s revelations, Gates was asked by Senate Armed Services Committee Chair Carl Levin to put it in writing. Gates came back with an honest report: Early claims of damage had been, in Gates’s words, “significantly overwrought.”

Bill Binney and his colleagues tell me the same is probably true of the hyperbole used to portray the damage from the Snowden disclosures.

Yet, balancing whatever that “damage” was is the significance of Snowden’s argument that the warrantless bulk surveillance of Americans was illegal under the Constitution and created the risk of a future leader imposing a “turnkey tyranny” on the United States because of all the embarrassing and incriminating information that would be collected on American citizens.

There is now no doubt that Snowden’s constitutional concerns were well-founded and it is not hard to imagine how an unscrupulous politician might make effective use of people’s personal secrets or their unguarded comments.

But it is easier to discredit Snowden by simply portraying him as a Russian spy. After all, we are now deep in a New McCarthyism that accompanies the New Cold War. Any contact with Russians – no matter how unintentional in Snowden’s case – is regarded as somehow disqualifying.

So, that is the tack that Epstein took. However, the evidence isn’t there.

Chris Inglis, who was NSA’s Deputy Director when Snowden made the disclosures and who headed the initial NSA investigation, said about Snowden a year ago: “I don’t think he was in the employ of the Chinese or the Russians. I don’t see any evidence that would indicate that.”

Epstein – like so many others – also shows a basic lack of understanding of the important, graduated scale of values that Ed Snowden and other whistleblowers take with utmost seriousness. At one point, Epstein glibly says of Snowden, “In signing this [nondisclosure] document, he swore an oath not to divulge any of this information.”

But that’s not correct. The only oath that we, as military or other government officials swear is: “To support and defend the Constitution of the United States against all enemies foreign and domestic.”

Ethicists describe such an oath as a “supervening value,” far more serious than a promise like that embedded in the contract one signs in agreeing not to disclose classified information that could be harmful to U.S. national security. In other words, what do you do when your oath conflicts with the contract language, which one has the priority?

Are promises important? Of course they are. But in the moral sphere, oaths supersede promises. NSA was playing fast and loose with the Constitution’s Fourth Amendment (and arguably with the First and the Fifth as well) with warrantless surveillance. Snowden chose not to break his oath to the Constitution. Nor would he remain silent when others broke theirs. 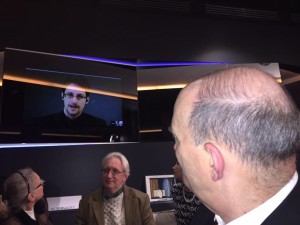 Watching what happened to fellow whistleblowers – like Thomas Drake – who tried to “go through channels,” Snowden knew that he had to “get out of Dodge” to have any hope of remaining at liberty long enough to complete his mission. He decided to run the huge risk involved in defending the Constitution against incipient “turnkey tyranny.”

That may be difficult for Epstein and many cynical observers to believe, but without any evidence to the contrary, Snowden hardly deserves to be treated like the CIA officers who faced character assassination from Epstein’s paranoid mentor, Angleton.

I first met Snowden in early October 2013 when I was a member of the first delegation of Americans to visit him as a political exile in Russia. Four of us, all members of Sam Adams Associates for Integrity in Intelligence, officially presented him with our annual award for integrity.

My three colleagues, each of them an earlier awardee, were whistleblowers Coleen Rowley, Thomas Drake, and Jesselyn Raddack (ex-FBI, -NSA, -Department of Justice, respectively). After the award ceremony we spent seven hours relaxing and comparing notes with Snowden. And a year later, I had a long lunch with him in Moscow.

For my colleagues and me, this unassuming, courageous young man, known to us only by what he had said and done over the previous three months, proved to be the precisely the patriotic whistleblower we thought he was. His courage and motivation were altogether believable to Rowley, Drake and Raddack, for each of them had taken similar risks in blowing the whistle on U.S. government misconduct.

This is simply to say that all four of us seasoned professionals had a unique opportunity to take the measure of Snowden up close and personal. It is a truly a pity that author Epstein did not do the same.

Ray McGovern was a CIA analyst for 27 years; he briefed the president’s daily brief one-on-one to President Reagan’s most senior national security officials from 1981-85.

← An Oscar for a Propaganda Flick
Trump Hides Behind the Military →

54 comments for “Another Hatchet Job on Snowden”