Exclusive: President Trump’s early hard-right actions and hirings threaten some of America’s most vulnerable people and the environment, with his policies even compared to the poison Agent Orange, writes Marjorie Cohn.

Rapper Busta Rhymes pegged it at the Grammy Awards when he referred to Donald Trump as “President Agent Orange.” While performing with A Tribe Called Quest and Anderson Paak, Rhymes used the opportunity to call out Trump for his Muslim ban and “all of the evil” Trump has perpetrated since assuming the presidency three weeks ago. 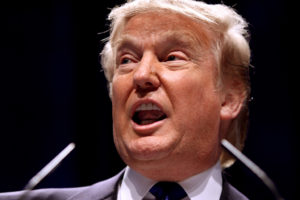 For some younger readers who may not be familiar with the term, Agent Orange was an herbicidal chemical weapon sprayed over 12 percent of Vietnam by the U.S. military from 1961 to 1971. The dioxin present in Agent Orange is one of the most toxic chemicals known to humankind.

Those exposed to Agent Orange often have children and grandchildren born with serious illnesses and disabilities. The international scientific community has identified an association between exposure to Agent Orange and some forms of cancers, reproductive abnormalities, immune and endocrine deficiencies, and nervous system damage. Second- and third-generation victims continue to be born in Vietnam, as well as to U.S. veterans and Vietnamese-Americans in this country.

The use of dioxin, a poisoned weapon, was a war crime in violation of the Hague Convention. It also constituted a crime against humanity because it was an inhuman act perpetrated against a civilian population. Despite all that, the U.S. government has given only small amounts of money to address the human victims of Agent Orange/dioxin. Much of the money has not reached the victims who need it so much, and the amounts allocated cannot make much of a dent in addressing the tremendous human suffering.

Second and third generation children of American Vietnam veterans face the same problems as do exposed Vietnamese-Americans. That is why Rep. Barbara Lee, D-California, introduced H.R. 334, the Victims of Agent Orange Relief Act of 2017.

The bill, which currently has 23 co-sponsors, would provide health care and social services for affected Vietnamese; medical assistance and disability benefits to affected children of U.S. veterans of the Vietnam War; and health assessment, counseling and treatment for affected Vietnamese-Americans and their offspring. It would also clean up the lands and restore ecosystems contaminated by Agent Orange/dioxin in Vietnam.

Though some might view the comparison between President Trump and poisonous dioxin sprayed indiscriminately on living things a bit hyperbolic, many of Trump’s early actions and proposals – like Agent Orange – may inflict devastation for years to come.

Since taking office, Trump has moved systematically to unravel protections for immigrants, workers, the environment, Native Americans and other people of color, as well as the right to healthcare. He has moved to deregulate Wall Street, incurring a real risk of another financial meltdown. And his Muslim ban created worldwide chaos, pain and insecurity for untold numbers of people. The courts have halted the ban – for now.

Moreover, Trump has already committed a war crime in Yemen, ordering a raid that killed at least 25 civilians, nine of them children, including a three-month-old baby and a pregnant woman. Mohsina Mabkhout al Ameri lost her brother, nephew and his three children in the attack.

“They killed men, children and women and destroyed houses,” she told the Bureau of Investigative Journalism. “We are normal people and have nothing to do with al-Qaeda or the Houthis or anyone. The men came from America, got off the planes and the planes bombed us,” she added.

Nevertheless, the Trump administration proclaimed the raid “absolutely a success.” Trump called it a “winning mission.” Trump also favors torture and waterboarding and has pledged to continue drone strikes. He has already begun deporting DREAMers. And if he has his way, his administration will exclude large numbers of refugees fleeing war and persecution.

Under a President Trump, we can expect a continual, persistent assault on civil rights and human rights, and increasing heartache both in the United States and abroad. This is why Busta Rhymes called Trump’s actions “evil.” At the end of the rap performance, Muslim women wearing headscarves and others joined the musicians onstage. They all raised their fists, repeatedly chanting, “Resist!”

Marjorie Cohn is professor emerita at Thomas Jefferson School of Law, former president of the National Lawyers Guild, and deputy secretary general of the International Association of Democratic Lawyers. In 2009, she served as one of seven judges from three continents who heard two days of testimony from 27 witnesses at the International People’s Tribunal of Conscience in Support of the Vietnamese Victims of Agent Orange in Paris. She is a member of the national advisory board of Veterans for Peace and co-coordinator of Vietnam Agent Orange Relief and Responsibility Campaign [http://www.vn-agentorange.org/ ]. Visit her website at http://marjoriecohn.com and follow her on Twitter @MarjorieCohn.