President Trump is getting a crash course on the U.S. Constitution’s separation of powers as federal courts knock down his temporary immigration ban aimed at seven mostly Muslim countries, reports Marjorie Cohn at The Jurist.

On Jan. 27, President Trump made good on his campaign promise to institute a ban on Muslims entering the U.S. Trump’s executive order (“EO”) is titled “Protecting the Nation From Foreign Terrorist Entry Into the United States.”

The EO bars nationals from seven Muslim-majority countries from the U.S. for at least 90 days. They include Iraq, Iran, Libya, Syria, Somalia, Yemen and Sudan. The EO also indefinitely prevents Syrian refugees, even those granted visas, from entering the U.S. And it suspends the resettlement of all refugees for 120 days.

None of the 9/11 hijackers came from the seven countries covered by the EO; 15 of the 19 men hailed from Saudi Arabia, which is not on the list. No one from the seven listed countries has mounted a fatal terrorist attack in the United States.

Trump’s EO violates the Establishment Clause, the Due Process Clause, the Equal Protection Clause, and the Take Care Clause of the Constitution. It also violates the Convention Against Torture and Other Cruel, Inhuman or Degrading Treatment or Punishment (CAT), as well as the International Covenant on Civil and Political Rights (ICCPR); both are treaties the United States has ratified, making them part of U.S. law under the Constitution’s Supremacy Clause. The EO violates the Immigration and Nationality Act as well.

In the face of legal challenges, five federal courts have temporarily stayed implementation of parts of the EO, indicating that petitioners have a strong likelihood of prevailing on the merits.

On Jan. 28, U.S. District Judge Ann Donnelly of the Eastern District of New York concluded that the petitioners “have a strong likelihood of success in establishing that the removal of the petitioner and others similarly situated violates Due Process and Equal Protection.” She also found “imminent danger . . . [of] substantial and irreparable injury to refugees, visa-holders, and other individuals from nations subject to the [EO].”

Donnelly thus enjoined respondents Trump, U.S. Customs and Border Protection (CBP), Department of Homeland Security (DHS), et al from removing anyone with refugee applications approved by U.S. Citizenship and Immigration Services as part of the U.S. Refugee Admissions Program. Holders of valid immigrant and non-immigrant visas, and other individuals from the seven listed countries who are legally authorized to enter the U.S., are also protected from removal by Donnelly’s order.

In spite of Donnelly’s order, CBP agents continued to detain immigrants at airports across the country and send them back, even though some could face persecution in their countries of origin.

Nevertheless, CBP agents refused to allow detained lawful permanent residents to consult with lawyers. On Feb. 1, the Commonwealth of Virginia asked a federal judge to force Trump, CBP and other high government officials to show cause why they should not be held in contempt for refusing to obey a lawful court order.

On Jan. 28, U.S. District Judge Thomas Zilly of the Western District of Washington granted a stay of removal and enjoined respondents Trump et al from removing the plaintiffs from the U.S. pending a hearing on Feb. 3.

On Jan. 29, U.S. District Judge Allison Burroughs and U.S. Magistrate Judge Judith Gail Dein of the District of Massachusetts found that Iranian petitioners, a married couple, both of whom are engineering professors at University of Massachusetts-Dartmouth, had a strong likelihood of success in establishing the detention/and or removal of them and others similarly situated would violate Due Process and Equal Protection.

The two judges also concluded petitioners were likely to suffer irreparable harm. They issued a temporary restraining order, preventing respondents Trump et al from detaining or removing for seven days individuals with refugee applications approved by U.S. Citizenship and Immigration Services as part of the U.S. Refugee Admissions Program. Holders of valid immigrant and non-immigrant visas, lawful permanent residents,] and others from the seven listed countries who, absent the EO, would be legally authorized to enter the U.S., were also protected from exclusion.

On Jan. 31, U.S. District Judge Andre Birotte in Los Angeles ruled that the government must permit immigrants from the seven listed nations who have initial preclearance for legal residency to enter the U.S. Birotte ordered U.S. officials to refrain from “removing, detaining or blocking the entry of [anyone] . . . with a valid immigrant visa” arriving from one of the seven countries.

Attorney Julie Ann Goldberg had filed the Los Angeles case on behalf of more than 24 plaintiffs of Yemeni descent, including U.S. citizens. Over 200 people holding immigrant visas who had left Yemen, and are either related to U.S. citizens or lawful permanent residents, were stranded in Djibouti and prevented from flying to the U.S.

Meanwhile, on Feb. 1, a counsel to the president informed government agencies that the EO does not apply to some categories of immigrants. They include lawful permanent residents, Iraqis who worked for the US government in jobs such as interpreters and people with dual nationality when entering the U.S. with a passport from a country other than one of the forbidden seven. 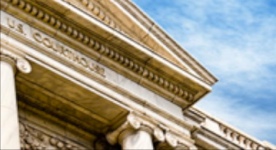 On Feb. 3, U.S. District Judge James Robart in Seattle issued a temporary nationwide restraining order halting the EO’s ban on citizens of the seven countries from entering the US. Judge Robart ruled the EO would be stopped nationwide, effective immediately. (The New York Times called Robart’s ruling “a humbling defeat” for the Trump administration.)

The EO “imposes a selective ban on immigration from seven Muslim-majority countries as well as establishes preferential treatment for refugees seeking asylum who are identified with ‘minority religions’ in their country of origin,” ACLU National Legal Director David Cole wrote in Just Security. Cole cited Trump’s statement on Christian Broadcast News that the intent of his EO was to prioritize “Christians” seeking asylum over “Muslims.”

Erwin Chemerinsky, dean of UC Irvine School of Law, observed in the Los Angeles Times, “Although Trump’s order does not expressly exclude Muslims, that is its purpose and effect as it bars entry to individuals from predominantly Muslim countries.”

Procedural due process forbids the government from depriving an individual of life, liberty or property without due process of law. The U.S. government is obligated to hear the asylum claims of noncitizens who arrive at U.S. borders and ports of entry.

Muslim immigrants and non-Muslim immigrants from the seven listed countries are two separate classes of people for Equal Protection purposes. Unequal treatment of different groups based on religion, which is a suspect class, are subjected to strict scrutiny and thus there must be a compelling state interest to justify the disparate treatment. None of the 9/11 hijackers came from any of the seven countries. There have been no fatal terrorist attacks on U.S. soil by anyone from those countries. Therefore, there is no compelling state interest for treating the two classes differently. This is particularly true in light of Trump’s statements that his order would prioritize “Christians” seeking asylum over “Muslims.”

As Corey Brettschneider wrote for Politico, the Court drew a clear connection between the protection of religious liberty and the Equal Protection Clause’s prohibition of invidious discrimination in Church of Lukumi Babalu Aye v. City of Hialeah.

Trump’s EO violates the Take Care Clause of the Constitution, according to Jeanne Mirer, president of the International Association of Democratic Lawyers.

“This provision requires the President to ‘take care’ that the laws of the country are faithfully executed,” Mirer wrote on Facebook. “The EO on immigration violates this clause because it requires government officials to violate various laws as well as human rights treaties we have ratified. He is also violating it by appointing people who openly oppose the laws they are being asked to enforce. Impeachable offense,” she added.

Article 3 of the Convention Against Torture and Other Cruel, Inhuman or Degrading Treatment or Punishment (CAT) establishes the principle of nonrefoulement. It forbids states parties from expelling, returning or extraditing a person to a state “where there are substantial grounds for believing that he would be in danger of being subjected to torture.” Refugees often flee repressive regimes to escape persecution. Sending people back to a country where they may well suffer torture violates the CAT.

Article 2 of the International Covenant on Civil and Political Rights (ICCPR) forbids states parties from making distinctions in the provision of civil and political rights based on “race, colour [sic], sex, language, religion, political or other opinion, national or social origin, property, birth or other status.” By giving fewer rights to Muslims than non-Muslims, Trump is violating the ICCPR.

Attorneys general from 15 states and the District of Columbia issued a joint statement condemning the EO. One thousand State Department employees likewise opposed the EO.

After federal courts stayed the ban, acting Attorney General Sally Yates ordered the Justice Department not to defend the EO, saying she wasn’t convinced it was lawful. Trump responded by firing Yates, stating she had “betrayed the Department of Justice.”

Ironically, Sen. Jeff Sessions, who will become Attorney General once the Senate confirms his nomination, asked Yates at her confirmation hearing whether she thought the Attorney General had “the responsibility to say no the President if he asks for something that’s improper.”

Hundreds of people were kept in limbo after Trump issued his order. A five-year-old boy was separated from his mother for four hours. Erez Reuveni, an attorney with the Justice Department’s Office of Immigration Litigation, said more than 100,000 visas have been revoked. He could not say, however, how many people who had visas were sent back to their home countries. But, William Cocks from the State Department Bureau of Consular Affairs wrote in an email to NBC News, “Fewer than 60,000 individuals’ visas were provisionally revoked to comply with the Executive Order.”

Although thousands protested the Muslim ban at airports around the country, White House chief of staff Reince Priebus told CBS News that the ban could be extended.

After Judge Robart issued the nationwide stay on Feb. 3, the White House vowed to appeal the ruling. Trump tweeted, “The opinion of this so-called judge, which essentially takes law-enforcement away from our country, is ridiculous and will be overturned!” In another tweet, Trump wrote, “When a country is no longer able to say who can, and who cannot , come in & out, especially for reasons of safety &.security – big trouble!”

But the Department of Homeland Security announced it would comply with Robart’s order. “In accordance with the judge’s ruling,” DHS acting press secretary Gillian Christensen said, “DHS has suspended any and all actions implementing the affected sections of the Executive Order entitled, ‘Protecting the Nation from Foreign Terrorist Entry into the United States.’ This includes actions to suspend passenger system rules that flag travelers for operational action subject to the Executive Order.”

The US State Department also reversed the cancellation of the 60,000 – 100,000 visas revoked after the EO was issued.

The rubber will meet the road when federal appellate judges and probably the Supreme Court rule on the merits of these petitions. If the petitioners ultimately prevail, we will see whether the Trump administration fulfills its legal duty to act in accordance with those judicial decisions.

Marjorie Cohn is professor emerita at Thomas Jefferson School of Law and former president of the National Lawyers Guild. Her most recent book is Drones and Targeted Killing: Legal, Moral, and Geopolitical Issues. Visit her website at http://marjoriecohn.com/ and follow her on Twitter @MarjorieCohn. [This article first appeared at The Jurist, JURIST http://www.jurist.org/forum/2017/02/Marjorie-Cohn-trump-unconstitutional-muslim-ban.php]

57 comments for “Trump Schooled on Separation of Powers”