Exclusive: President Trump’s calls for reorienting American foreign policy look to be disintegrating in his first two weeks in office as he embraces the neoconservative hostilities toward Iran and Russia, as Andrew Spannaus notes.

The Trump Administration’s goal of de-escalating tensions with Russia is meeting stiff resistance in Eastern Europe where many reject the notion that a diplomatic solution can be reached over the issues of Ukraine and NATO expansion.

This reality was on clear display at the 10th Europe-Ukraine Forum held in Rzeszow, Poland, from Jan. 27 to 29, which brought together over 900 government officials, politicians and analysts from across Europe, to discuss how to respond to the new political situation in the United States while continuing to provide support to Kiev’s efforts to bind itself closer to the West.

The atmosphere at the Forum – an annual event organized by the Eastern Institute of Warsaw – was more muted than last year, as the reality of the “realpolitik” likely to be adopted by President Trump’s administration sinks in.

The previous forum in 2016 was opened by the American neoconservative Philip Karber, president of the Potomac Foundation, who lamented the “sophistic” reasoning of those who argue against providing military assistance to Ukraine and said he couldn’t wait for the next presidential administration to arrive (when it appeared likely it would be headed by Hillary Clinton or a traditional Republican). Karber noted that President Barack Obama had refused to fully arm the Ukrainians in their battle against Russia.

This wasn’t just idle talk coming from Karber, as we found out a few months later in 2016, thanks to leaks published by The Intercept last July. It appears that Karber had gone repeatedly to the front lines of the fight in Ukraine to draw up his own – inflated – intelligence reports regarding Russian intervention. He sent the reports to General Philip Breedlove, at the time the Supreme Allied Commander in Europe, who in turn used Karber’s figures to challenge the lower estimates drawn up by official intelligence agencies.

General Breedlove then went a step further, seeking to mobilize pressure on President Obama to provide lethal assistance to Ukraine. Despite enlisting the help of prominent individuals such as former Secretary of State Colin Powell and one of Breedlove’s predecessors at NATO, retired Gen. Wesley Clark, Breedlove’s efforts proved ineffective. Although President Obama continued to direct harsh criticism at Russia in public, behind the scenes his message to the General was: “do not get me into a war.”

Harlan Ullman, senior adviser to the Atlantic Council, wrote to Breedlove about his attempt to “leverage, cajole, convince or coerce the U.S. to react” to Russia: “Given Obama’s instruction to you not to start a war, this may be a tough sell.”

The hope for a more aggressive stance against Russia by the future U.S. administration obviously didn’t take into account the possibility that the next President would be Donald Trump. In January 2016, few gave Trump any chance to actually win the election, and thus the assumption was that by this time, Hillary Clinton or a Republican such as Marco Rubio or Jeb Bush would be occupying the White House.

Trump’s election seemed to upend the U.S. establishment’s push for a more aggressive stance towards Russia that has been on full display since last fall in particular. The news media and political class have, in fact, focused almost hysterically on alleged Russian intervention into the U.S. elections, despite crucial gaps in the evidence presented to the public and the question of whether Russian President Putin would have taken such a risk when it appeared Clinton was a shoo-in to win.

The WikiLeaks disclosures – primarily confirming Clinton’s close ties to Wall Street and the Democratic National Committee’s help in undermining Bernie Sanders’s campaign – were not initially considered a major factor in Clinton’s defeat, which she principally blamed on FBI Director James Comey’s last-minute reopening and re-closing of the investigation into her use of a private email server for State Department business. No one has suggested that Putin was behind Comey’s actions or Clinton’s server decision.

The early Trump administration has sent mixed signals regarding relations with Russia. Trump’s initial comments indicated that the U.S. would seek a diplomatic deal to reduce tensions around Ukraine, including by potentially recognizing the pro-Russian referendum in Crimea, in exchange for a broader deal with Russia involving cooperation against terrorism or nuclear arms reduction. However, Trump’s United Nations Ambassador Nikki Haley on Thursday vowed to continue sanctions against Russia until it surrendered Crimea.

At the Europe-Ukraine Forum, the earlier expectation of reduced tensions with Russia was grudgingly accepted by some, but outright rejected by most. Many speakers called for an even more aggressive stance on NATO expansion to include not only Ukraine, but also Sweden, Finland and any other country in Russia’s neighborhood. 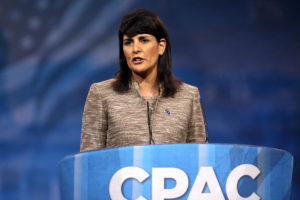 Tomasz Szatkowski, Undersecretary of State of the Polish Ministry of National Defense, also said Poland would volunteer to lead a group of nations in creating a first-response network, ready to organize out-of-area military missions in response to Russian aggression. Other officials agreed with the idea of creating an alliance between a group of countries going from the Baltics down through Eastern Europe, to put pressure on the European Union and the United States to head off any potential diplomatic accords with Putin.

The fear among these participants was that Ukraine would lose out in any U.S.-Russian diplomatic accord. They argued further that if nothing is done to counter Putin’s alleged expansionism then Russia will inevitably move into Eastern Europe in order to restore its former empire.

However, this view is based on the assumption that the conflict in Ukraine broke out simply because the Russian president woke up one morning and decided it was time to expand Russian military power again. It ignores what the West did up to 2014, such as expanding NATO towards Russia’s borders and providing support through both official sources and numerous NGOs to “pro-democracy” groups, some of which wanted regime change not only in Kiev but in Moscow.

A prominent example is the head of the U.S. taxpayer-funded National Endowment for Democracy (NED), Carl Gershman. As journalist Robert Parry has reported, NED funded scores of “democracy promotion” projects in Ukraine, contributing to undermining the previous elected government and touching off the civil war between Ukrainian nationalists from the west and ethnic Russians from the east. Gershman also has called for the overthrow of Vladimir Putin in Russia.

Although the West’s propaganda narrative has obscured the circumstances around the ouster of Ukrainian President Yanukovych on Feb. 22, 2014, the violent putsch has been called the “most blatant coup in history” by George Friedman, the founder of Stratfor and Geopolitical Futures. At the time of the coup, a diplomatic deal had been struck for new elections by the end of the year, but far-right militia groups stepped in to seize control of the government institutions and the coup regime was quickly declared “legitimate” by the U.S. government and its allies.

A key player in the change in power was U.S. Undersecretary of State for European Affairs Victoria Nuland, who was recorded in a pre-coup phone call saying “Fuck the EU” with regard to Europe’s role as a mediator for a diplomatic solution, and also hand-picking the person who would become the new prime minister, Arseniy Yatsenyuk, with the comment “Yats is the guy.”

This direct intervention by the West provoked a predictable reaction from Russia, which moved quickly to ensure that Crimea would not end up under the NATO umbrella and then provided support to ethnic Russian rebels in the east of Ukraine who battled Ukrainian troops spearheaded by the neo-Nazi Azov Battalion and other ultra-nationalist militias.

The intensity of the conflict in Ukraine decreased considerably after a ceasefire agreement was hammered out in early 2015. However, on Jan. 28, barely a week into the Trump administration, new fighting broke out around the city of Avdiivka in eastern Ukraine. Staunchly anti-Russian media outlets and politicians immediately tried to leverage the situation to block any moves by President Trump to press ahead with a diplomatic solution.

However, at the Forum in Rzeszow, there were at least some voices calling for a recognition of the new reality ushered in by the change in approach in Washington. In private discussions several government officials noted that with further NATO expansion probably off the table at this point, there is no alternative to dialogue.

A few speakers, such as Markku Kangaspuro of Finland and former Ukrainian government official Oleksandr Chalyi, admitted publicly that there cannot be total war with Russia, and that at this point a political solution seems to be the only way forward. The most that can be done, from the standpoint of those who aim to counter Russia’s influence as much as possible, is to try to limit and mitigate a potential deal between Trump and Putin.

← A Reprise of the Iraq-WMD Fiasco?
The Double Standard on Yemen’s Suffering →