Donald Trump’s presidency is off to a chaotic and troubling start with provocateur Steve Bannon pushing controversial policies and Trump closing ranks with the Right, say Bill Moyers and Michael Winship.

The smell of a coup hung over the White House this past weekend, like the odor of gunpowder after fireworks on the Fourth of July.

In these first few days of the Trump administration we have witnessed a series of executive orders and other pronouncements that fly in the face of the Republic’s most fundamental values. But Friday’s misbegotten announcement of a ban on refugees from Syria and a 120-day ban on refugees from seven Muslim nations defies reason, pandering to a segment of the population festering with paranoia and rage. 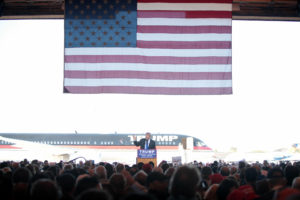 Donald Trump speaking with the media at a hangar at Mesa Gateway Airport in Mesa, Arizona. Dec. 16, 2015. (Flickr Gage Skidmore)

Let’s just look at some of the misrepresentations that litter Trump’s declaration like garbage strewn across a sidewalk. Despite claims that the order is not about religion (!), it gives Christian refugees priority because, Trump wrongly said, “If you were a Muslim you could come in, but if you were a Christian it was almost impossible.” The New York Times reports that, “In fact, the United States accepts tens of thousands of Christian refugees. According to the Pew Research Center, almost as many Christian refugees (37,521) were admitted as Muslim refugees (38,901) in the 2016 fiscal year.”

Trump went on to say that in Mideast war zones, “Everybody was persecuted, in all fairness — but they were chopping off the heads of everybody, but more so the Christians.” Again the facts: The Washington Post notes that “Since the beginning of the Syrian civil war and the rise of the Islamic State, many more Muslims than Christians have been killed or displaced because of the violence.”

What’s more, The New York Times editorial board observed, “The order lacks any logic. It invokes the attacks of Sept. 11 as a rationale, while exempting the countries of origin of all the hijackers who carried out that plot and also, perhaps not coincidentally, several countries where the Trump family does business.”

Add to all this the haste and hurry, the sloppiness of preparation and apparent lack of prior review by qualified attorneys and affected government agencies, the chaos and pain created by its sudden, thoughtless implementation and the fuel this will doubtless add to the propaganda of the very same radical Islamic terrorists the executive order is supposed to keep out of the country. What Trump did makes little or no sense, and the way he did it was an insult to due process.

The President’s decree on immigration is the act of a self-assumed Caesar — a Peronista strongman, wielding power like a blunt instrument with no regard for the short- or long-term consequences on fellow human beings or other nations. The courts have countered him for the moment on some provisions, but the stay is temporary. And Trump will soon be replacing more than 100 federal judges, all in his image, no doubt, like mannequins in a store window.

Oddly enough, while it seems clearer than ever that Donald Trump has never really read the U.S. Constitution, he may have inadvertently picked up a wrong idea or two from the Declaration of Independence. Among the Founders’ grievances against King George III was that the monarch was “obstructing the Laws for Naturalization of Foreigners” and “refusing to pass others to encourage their migrations hither.”

Does it come as any surprise that with his refugee ban Trump favors a ban that sounds more like it came from tyrannical old King George than leaders of the American Revolution? No wonder he leaped at the invitation extended by the U.K.’s Prime Minister Theresa May last week to dine with Queen Elizabeth. Next thing you know the gilded letters T-R-U-M-P will grace Downton Abbey. You can imagine dreams of reviving old royal traditions like primogeniture jitterbugging in his head — otherwise, what’s the use of having three sons if not so at least one of them can inherit the gilded throne? (Sorry, Ivanka and Tiffany.)

Washington Post columnist Ruth Marcus got it right: “You don’t have to disagree with Trump’s policies to be rattled to the core by his unhinged behavior. Many congressional Republicans privately express concerns that range from apprehension to outright dread.” Which raises another question: Why do GOP lawmakers remain so publicly cowed? Is it because they cherish their party’s power more than they do America’s principles?

The Rise of Bannon

Now the new president has placed his spooky senior counselor Steve Bannon on the National Security Council. This is a man so far to the right he called William Buckley’s National Review and William Kristol’s The Weekly Standard “both left-wing magazines.” During his reign as chief of Breitbart News, he tolerated racist and sexist attitudes, and announced to a real journalist, “I am a Leninist.” He went on to explain: “Lenin wanted to destroy the state, and that’s my goal, too. I want to bring everything crashing down, and destroy all of today’s establishment.”

At least until the President gets fed up with the attention Bannon’s receiving and fires him, the gruesome twosome appear to have settled on their mode of governance: Trump does the theatrics, Bannon does the policy. Bannon writes the executive orders, Trump signs them.

With all this instability, it’s not surprising that not only progressives but also thoughtful conservatives already have had it with the President. Here’s neo-con Eliot Cohen in The Atlantic: “Trump, in one spectacular week, has already shown himself one of the worst of our presidents, who has no regard for the truth (indeed a contempt for it), whose patriotism is a belligerent nationalism, whose prior public service lay in avoiding both the draft and taxes, who does not know the Constitution, does not read and therefore does not understand our history, and who, at his moment of greatest success, obsesses about approval ratings, how many people listened to him on the Mall and enemies. He will do much more damage before he departs the scene, to become a subject of horrified wonder in our grandchildren’s history books.”

At Washington Monthly, Martin Longman agreed. “Cohen and I couldn’t be more different in our personal politics or our foreign policy priorities,” he wrote, “and yet we’re singing from the exact same hymnal on Trump. … I honestly do not think this country can endure a four-year term of Trump as our president, and the prospects for worldwide calamity are so great that I can’t avoid saying very radical sounding things about where we stand and what must be done.”

Ladies and gentlemen, we are already in the midst of a national emergency. The radical right — both religious and political — have been crusading for 40 years to take over the government and in Trump they have found their rabble-rouser and enabler. They intend to hallow the free market as infallible, outlaw abortion, Christianize public institutions by further leveling the “wall” between church and state, channel public funds to religious schools, build walls to keep out brown people and put “America first” on the road to what Trump’s nominee to be Secretary of Education, Betsy DeVos, has called “God’s Kingdom.”

You can see in the chaos a pattern: the political, religious and financial right collaborating to move America further from the norms of democracy with the triumph of one-party, one-man rule. There’s never been anything like it in our history. But many in the media are catching on, which explains the strategy Trump and his pack have adopted to discredit journalists, as Bannon tried last week when he proclaimed that the media “should keep its mouth shut.”

That’s not going to happen. Nor does it look as if the hundreds of thousands of protesters who marched the day after the inauguration and this past weekend at the nation’s airports to protest the refugee ban are about to stop either. A sturdy line of resistance is forming as the press, the people and patriotic lawyers join in fighting for our rights in the nation’s courts of justice and in the court of public opinion. Perhaps some brave Republican legislators, uncharacteristically demonstrating a profile in courage, will take a stand, too, against the despotic urges now roiling the Republic.