The fiasco of President Trump’s executive order involving travel bans from selected Muslim-majority countries has consumed public attention for several days, although it was only one of several actions that have constituted the most disorganized and strife-laden opening ten days of any U.S. administration in memory.

This order deserves the vigorous criticism it has received on several grounds, but it is important to note how such a badly drafted document ever made it under the presidential pen in the first place. Reportedly it was the product of a small circle of political advisers surrounding Trump, with amazingly little input or review from any other parts of the government, including those parts responsible for implementing the order.

Not only were the responsible portions of the bureaucracy excluded; so were Trump’s own cabinet appointees. Secretary of Homeland Security John Kelly, whose department is most directly involved in the implementation, was only halfway through receiving his first briefing on the new policy when the President signed the order.

Such an absence of an orderly policy-making process — an absence that has characterized not only the order about travel but several other of Trump’s early actions — is markedly at odds with what has long been the usual procedure leading to presidential decisions involving major initiatives or redirections of U.S. foreign and security policy.

With only minor variations, most such major policy decisions in past administrations have been preceded by lengthy review and discussion, at multiple levels, among all the departments and agencies with responsibilities bearing on the subject at hand.  Such review mostly takes place in interagency committees chaired by the National Security Council staff.

There are good and important reasons for such a process. Relevant realities that must be confronted, including political and diplomatic realities abroad, are best recognized and highlighted by those components of the government that have to deal with those realities every day or have a responsibility for monitoring them. All relevant U.S. interests and objectives that could be affected by a policy change need to be considered.

Again, getting input from different departments and agencies that have specific responsibility for advancing different U.S. interests is the best way to ensure that all U.S. equities are taken into account. Then there are the potential unintended consequences and problems of interpretation and implementation that bedevil many major changes in policy. Having many different eyes, with different bureaucratic perspectives, being part of the review reduces the chance of overlooking such consequences and problems. 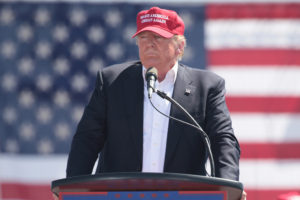 The order on travel and immigration was clearly and badly deficient on all of these grounds. Other early orders from the Trump White House may not have had as much immediately disruptive effect but, absent a decent policy process, also are deficient in the same way, with their overlooked problems likely to surface later.

Another of the early Trump directives, involving NSC machinery, reflects an inclination to keep operating in the same way that produced the travel ban. Trump’s political adviser and chief ideologist Stephen Bannon, who reportedly played the biggest role in writing the travel order, has been given a permanent seat on the policymaking principals’ committee, even as the Chairman of the Joint Chiefs of Staff and the Director of National Intelligence are denied such seats. Such an arrangement is certainly not aimed at accomplishing the legitimate and important purposes of policy review as mentioned above.

Bannon proudly told an interviewer a couple of years ago, “I’m a Leninist,” explaining that “Lenin wanted to destroy the state, and that’s my goal too.”

One can already see Leninist tendencies in the Bannon-Trump White House, including with things like the handling of the anti-Muslim executive order. The Bolshevik leader installed what was called democratic centralism, with the “centralist” part being exceedingly tight control from the cabal at the top, and unquestioning obedience from everyone else. Other similarities between Petrograd 1917 and Washington 2017 can also be seen.

Probably we should focus most on Bannon’s own words in conveying his sense of Leninism. No, he won’t be able to destroy the state literally and send the United States into an anarchic state of nature. But he already has begun in effect to destroy it as far as policy formulation is concerned, with decisions coming out of the small band at the center.

As for the rest of the state, especially parts that include experienced and well-informed officials with relevant responsibilities, the response will be, “Fall in line, or leave.”

The one instance in U.S. foreign policymaking since World War II that involved a major redirection that was run out of a White House vest pocket and excluded the normal policymaking machinery, and that in retrospect was successful, was Nixon and Kissinger’s opening to China in the early 1970s. One look at the personnel in corresponding positions in the current administration makes it immediately clear that this experience cannot be taken as a model.

Mr. Bannon, you’re no Henry Kissinger. Neither are you, Mr. Flynn. (And Mr. Trump, you’re no Nixon, at least as far as acumen about foreign affairs is concerned.) Even Kissinger himself later said that his method of running foreign policy and gaming the bureaucracy was so bizarre and so dependent on his own unusual skill set that no one else should ever try to run foreign policy the same way.

There was one other big decision in recent times for which there was no policy process and no opportunity for the relevant departments and bureaucracies to weigh in. There never were, in this case, any meetings in the Situation Room or any options papers that ever considered whether the decision to be taken was a good idea. This was the decision to launch the Iraq War of 2003.

The Deputy Secretary of State at the time, Richard Armitage, later commented, “There was never any policy process to break, by Condi [Rice] or anyone else. There never was one from the start. Bush didn’t want one, for whatever reason.”

And we all know how well that one worked out.

← Rising Resistance to Trump on Immigration
Dangers of Democratic Putin-Bashing →