We are less than a week into the Trump presidency, and it is apparent that one of the more disturbing practices of Mr. Trump’s campaign he intends to continue while in office. 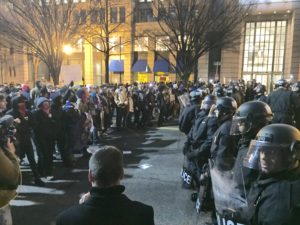 Protestors and police face each other on K St. in Washington, D.C. during the inauguration of Donald Trump. January 20, 2017. (Photo: Chelsea Gilmour)

The practice involves the President’s disdain for truth, but it is not just a matter of the volume of lies and how he has built his political career on falsehood, as disturbing as that is. Rather it is the more specific technique of unrelentingly repeating a lie so often and with such apparent conviction, while ignoring all contrary evidence and refutations, that through sheer repetition many people are led to believe it to be true.

The technique has been demonstrated by authoritarian regimes elsewhere. Many results of modern opinion polling suggest that now, in the post-truth era, there is even greater potential for making the technique work than for dictatorships of the past. Even a fact-checking free press cannot stop it; the fact-checking gets shoved aside amid the repetition.

The early subjects of post-inaugural use of the big lie have been ones closest to the bruises the new president’s ego suffered from the nature of last year’s election and Mr. Trump’s status as the least popular incoming president since such polls began to be taken. These subjects have included the size of inaugural crowds and audiences and the President’s baseless accusation that widespread voter fraud accounted for much of the popular vote that went against him. As the administration is forced to make real public policy, there is good reason to expect that the same techniques being applied now to ego-driven questions will also be applied to substantive policy matters to bolster public support for them.

There is no limit to the range of policy questions on which such efforts may be made, but consider the chief implications for foreign relations of the United States.

The first consequence is a loss of trust among foreign governments and populations, who see how frequent and shameless is the lying and thereby become less inclined to believe the U.S. government even when it is telling the truth.

Gideon Rachman addresses this effect in the Financial Times, asking, “When an international confrontation looms, the US has traditionally looked to its allies for support — at the UN or even on the battlefield. But how will America be able to rally support, in the Trump era, if its allies no longer believe what the US president and his aides have to say?”

A demonstrator holds a sign at the inauguration of Donald Trump on January 20, 2017. (Photo: Chelsea Gilmour)

A lesser ability to muster international support in pursuit of shared interests is one of the specific harms that flow from a loss of foreign trust. Another more general harm is the loss of one of the biggest advantages that the free world, and the United States as leader of the free world, have had over unfree countries — a loss that comes from stooping to use one of the favorite techniques of regimes that rule the unfree.

As Rachman observes, “If the Trump administration now destroys American credibility, it will have handed the Russian and Chinese governments a victory of historic proportions. The cold war was a battle not just about economics or military strength, but also about the truth. The Soviet Union collapsed, in the end, partly because it was too obvious that it was a regime based on lies.”

Another consequence of directing the big lie to domestic audiences is that this audience will become that much worse of an ill-informed constituency, incapable of engaging in the kind of well-informed debate that serves as a check against ill-advised foreign policies and can muster solid support for well-advised ones.

The difficulty in generating that kind of well-informed discussion is hard enough amid fake news and post-truth nonchalance about accuracy. Willing and relentless use of lying by those in power makes the difficulty even greater.

The problem is already great regarding domestic issues on which the people have some basis for making direct and independent observations. For example, two-thirds of Trump voters erroneously believe that unemployment increased during Barack Obama’s presidency, even though it significantly decreased. The problem will be at least as great on matters of foreign relations on which the public has less basis for direct observation and follows more what their leaders say.

A subtler but potentially significant consequence is that the leaders who propagate a big lie, by being so committed to sustaining the message contained in it, come to believe the lie themselves. And when this happens, foreign policy and its execution become based directly, not just indirectly by way of a duped public, on falsehood.

We saw a bit of this with the more fanatical of the promoters of the Iraq War. One of the most fanatical of them, Deputy Secretary of Defense Paul Wolfowitz (who, in the words of an anonymous official who worked with him, “has an unfortunate ability to delude himself because he believes so passionately in things”), came to believe that the mythical alliance between the Iraqi regime and Al Qaeda, manufactured as a propaganda point to gain public support for the invasion, actually existed, and even after the invasion he was wastefully directing resources to try to find evidence that it existed.

It is surely no coincidence that in this first week of Donald Trump’s presidency, George Orwell’s 1984 rose to the top of the Amazon bestseller list. We have not yet heard of any proposed government reorganization to create a Department of Truth.  We already have, however, gag orders to keep truth-telling public servants (especially, it appears, those who might have facts related to climate change) from interfering with messages from the top, including any messages that take the form of big lies.