Historically, Zionists have put the interests of Israel over the humanitarian plight of refugees, even in the face of Nazi Germany and now in shying away from offending President Trump, writes Lawrence Davidson.

It is a strange story. American Jews (and I expect it is the case with other Jews too) act in solidarity with other discriminated groups only if they, the Jews, resist Zionist leadership. If they follow the Zionist lead, they usually do one of two things: passively support the discriminatory majority or stay silent. This behavior is particularly true when it comes to the issue of immigrants.

I can see the eye-rolling and disgust on the faces of the Zionists who might be reading this analysis. Their reaction is to be expected because it is based on a self-image built on ideology rather than on honest knowledge of their own history. When we look at that history, we see that U.S. Zionist organizations have always played to the prejudices of the power brokers. The results, in terms of ethics and values, have been deplorable.

Here is a telling historical example. In the years leading up to the U.S. entrance into World War II, there was a general consensus on the issue of immigration. Most of the U.S. population was opposed to letting immigrants, most of whom were refugees, into the country. David Schoenbaum tells us in his book The U.S. and the State of Israel that in 1938, the same year as the Nazi pogrom known as Kristallnacht, 83 percent of respondents of a U.S. poll said they opposed any adjustment of immigration laws to allow in more European refugees. A year later, a bill to admit 20,000 mostly Jewish refugee children, above the existing minimal quota, failed in both the House and the Senate.

In part, this anti-immigrant attitude was the result of a Great Depression-era frame of mind that assumed that, even as war loomed on the horizon, unemployment was a permanent problem. And, in addition, the opposition to immigration was a reflection of traditional racism against any peoples whose origins were not the same as the U.S. middle and upper classes – mostly English and northern European.

For American Jews, the immigration of refugees was a particularly important issue. After all, Hitler ruled Germany and he was imprisoning and killing all the Jews he could get his hands on. As a result, much of Europe’s Jewish population was scared and ready to leave. However, often the problem was not getting out of the country oppressing you, but finding a safer country to get into.

Under the circumstances, one would assume that American Zionist organizations and leaders would be strongly lobbying Congress for greater refugee access to the U.S. However, as Gulie Ne’eman Arad tells us in the book America, Its Jews, and the Rise of Nazism, they were not. Typical of their attitude was a statement made by the Zionist leader Rabbi Stephen Wise during a Congressional hearing in 1939: “I have heard no sane person propose any departure from the existing [immigration] law now in force.” A self-damning statement if there ever was one.

Along the same lines it is to be noted that a year earlier, in 1938, the Zionist leader in Palestine, David Ben Gurion, had, according to the historian Benny Morris in his book Righteous Victims, declared that “if I knew it was possible to save all [Jewish] children in Germany by their transfer to England and only half of them by transferring them to Eretz-Yisrael [Palestine], I would choose the latter.”

Why was this the Zionist attitude? The reason offered at the time by American Zionists like Rabbi Wise was that an influx of Jewish refugees would spark an upsurge in anti-Semitism in the U.S. – a pitiful excuse in the case of not allowing entry to an additional 20,000 Jewish children. However this assertion was really a cover for a more ideologically dictated position. The Zionists did not want Europe’s Jewish refugees coming to the U.S. They wanted them to go to British-controlled Palestine.

However, the British had severely limited immigration into Palestine so as to maintain the support of Arabs for the Allied war effort against Germany and Italy. So what did Wise and his fellow U.S. Zionists do? They refused to engage in any attempt to support American immigration reform, and instead agitated in Congress and the press for pressure on the British to change Palestine’s immigration restrictions. They did this even though it at once cut off a viable American refuge for European Jews and threatened to complicate the British war effort in the Middle East.

Fast-forwarding to the present, we see that immigration and refugees are again major issues for the U.S. Today it is not Europeans, Jews or otherwise, fleeing from fascist oppression. Rather, it is Mexican immigrants crossing the country’s southern border in an effort to escape the poverty and violence of their homeland. It is also peoples of Arab ethnicity fleeing from wars that were often started or prolonged by the United States. 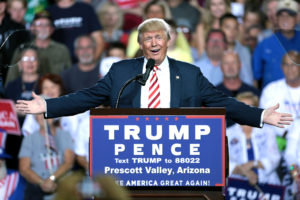 In the U.S. we now have a president, Donald Trump, who was elected on an anti-immigrant platform reflecting a bigoted outlook reminiscent of the 1930s. Trump wants to build a wall along the U.S.-Mexican border as well as to ban entry into the country of people of certain religious and/or national backgrounds.

Reaction to Trump’s bigotry has divided the American Jewish community. Organizations of progressive Jewish activists such as If Not Now (which puts itself forward as a “Jewish resistance” movement) and the Sisterhood of Salaam Shalom (which allies with local Muslims to oppose discrimination and hate), along with a number of Jewish Democratic politicians, have vocally rejected the President’s position on immigrants, refugees and Muslims.

But the reaction of the Zionist organizations has mostly been true to their history. For instance, Morton Klein, head of the Zionist Organization of America, opposes the entrance of Syrian refugees “until we have a better vetting system.” One suspects this is an excuse because the present system is in fact, exhaustive.

Now consider the more general position taken by the influential Abe Foxman, the “director emeritus” of the Anti-Defamation League. Foxman labels active resistance to Trump’s regressive policies, as well as any criticism of the positions taken by American Zionist organizations, as “nonsense.” Despite the fact that he and other Jewish leaders know that Trump “legitimized some of the ugliness,” Foxman wants to “enlist” the President in the fight against bigotry. He concludes that to “resist him and fight him is immature.” A similar position toward official bigotry was taken by Stephen Wise and the American Zionists in 1930s.

The safety and concerns of American Jews as regards bigotry and hate are not the primary interest of Zionist leaders like Klein and Foxman. Indeed, to the extent that such fears increase support for and dependence on Israel, these concerns are actually viewed as helpful. Nor do the Zionist organizations have any interest in opposing the U.S. government except on the command of the Israeli government.

Israeli Prime Minister Benjamin Netanyahu has great regard for Donald Trump and high hopes that now the U.S. government will put a final seal of approval on Israel’s own bigoted treatment of the Palestinians and illegal absorption of the West Bank. So the American Zionist organizations are not going to actively oppose Trump and will pressure other Jews to either support him or to stay silent.

The truth is that the Zionists have been eroding away the humanistic aspects of Jewish values for decades – casting them aside in favor of worst sort of “identity politics.” As a consequence official Judaism, taking its marching orders from people like Wise and Foxman and Klein has remained stuck in an ethically deplorable rut.

Lawrence Davidson is a history professor at West Chester University in Pennsylvania. He is the author of Foreign Policy Inc.: Privatizing America’s National Interest; America’s Palestine: Popular and Official Perceptions from Balfour to Israeli Statehood; and Islamic Fundamentalism. He blogs at

40 comments for “The Zionist Record on Refugees”