The U.S. population is led from one hysteria to the next, now transitioning from the Global War on Terror to the New Cold War with Russia, a fearful madness that is infecting the collective psyche, says Michael Brenner.

Captain Ahab’s obsessive hunt for Moby Dick was driven by the thirst for revenge. The great white whale had maimed Ahab – in soul as well as body. Ahab was consumed by the passion to restore his sense of self, and make himself whole again, by killing his nemesis – a compulsion that his wooden leg never lets weaken. 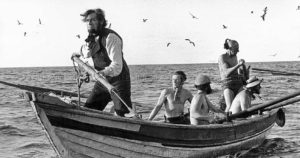 America’s “war-on-terror” has become our national mission for restoration. The psychic wound of 9/11 is what grieves us; it inflames our collective passion for vengeance. The physical wound is already healed. By now, it must be memorialized in order for the scar to be seen.  It never did impair our functioning. In that sense, little more than a broken toe.

In the aftermath of 9/11, there was genuine fear of a repeat attack – something that we now know never was in the cards. Our enemy has been emasculated; the great Satan was shot dead in Abbottabad. Only pinpricks at long intervals from within our midst draw blood.

Catharsis has eluded us, though. We still seethe with emotions. We suffer from the embedded anxiety that is dread, from uneasy feelings of vulnerability, from a seeming lost prowess and control. A society that talks casually about “closure” on almost all occasions cannot find closure on 9/11. Instead, the society has a powerful need to ritualize the fear, to pursue the implacable quest for ultimate security, to perform violent acts of vengeance that neither cure nor satiate.

So, we search the seven seas hunting for monsters to slay; not Moby Dick himself, but his accessories, accomplices, enablers, facilitators, emulators, sympathizers. Whales of every species, great and small, fall to our harpoons. The dead and innocent dolphins far outnumber even the smallest of whales. Fortunes of war.

Since there is no actual Moby Dick out there to pursue, we have fashioned a virtual game of acting out the hunt, the encounter, the retribution. We thereby have embraced the post-9/11 trauma rather than exorcised it. That is the “war-on-terror.” That war is about us – it no longer is about them.

Ahab destroyed himself, destroyed his crew, destroyed his ship. He sacrificed all in the quest – a quest for the unattainable. The United States is sacrificing its principles of liberty, its political integrity, the trust that is the bedrock of its democracy, its standing in the world as the “best hope of mankind,” and its capacity to feel for others – including its fellow citizens. America’s Moby Dick has migrated and transmuted itself. It now is lodged in our innermost being.

There, it spawns fictive offspring, such as Vladimir Putin. But the phantasmagoric Putin is but the projection of our own existential dread. The spectral persona who haunts our minds, “Putin” has no objective existence. “Putin” is the creation of our troubled national psyche. We have transposed onto him the whole maelstrom of turbid emotions we had imparted to Osama bin-Laden, and then the Islamic State.

To be rid of America’s transmuted Moby Dick we must kill part of our tainted being – a form of psycho-political chemotherapy. Otherwise, our national soul will whither away just as Ahab was sucked into the ocean depths entangled in the very ropes he had fashioned to ensnare Moby Dick.