The New Cold War promises untold riches for the Military-Industrial Complex, causing hawks inside the Obama administration to push for more hostilities with Russia, as in a Syrian case study dissected by Gareth Porter for Truthdig.

Airstrikes by the United States and its allies against two Syrian army positions Sept. 17 killed at least 62 Syrian troops and wounded dozens more. The attack was quickly treated as a non-story by the U.S. news media; U.S. Central Command (CENTCOM) claimed the strikes were carried out in the mistaken belief that Islamic State forces were being targeted, and the story disappeared. 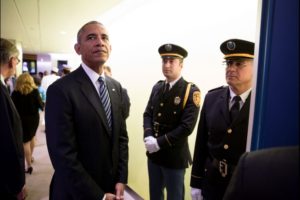 The circumstances surrounding the attack, however, suggested it may have been deliberate, its purpose being to sabotage President Obama’s policy of coordinating with Russia against Islamic State and Nusra Front forces in Syria as part of a U.S.-Russian cease-fire agreement.

Normally the U.S. military can cover up illegal operations and mistakes with a pro forma military investigation that publicly clears those responsible. But the air attack on Syrian troops also involved three foreign allies in the anti-Islamic State named Operation Inherent Resolve: the United Kingdom, Denmark and Australia. So, the Pentagon had to agree to bring a general from one of those allies into the investigation as a co-author of the report. Consequently, the summary of the investigation released by CENTCOM on Nov. 29 reveals far more than the Pentagon and CENTCOM brass would have desired.

Thanks to that heavily redacted report, we now have detailed evidence that the commander of CENTCOM’s Air Force component attacked the Syrian army deliberately.

Motives Behind a Pentagon Scheme

Secretary of Defense Ashton Carter and the military establishment had a compelling motive in the attack of Sept. 17 — namely, interest in maintaining the narrative of a “new Cold War” with Russia, which is crucial to supporting and expanding the budgets of their institutions.

When negotiations on a comprehensive cease-fire agreement with Russia, including provisions for U.S.-Russian cooperation on air operations against Islamic State and Nusra Front, appeared to gain traction last spring, the Pentagon began making leaks to the news media about its opposition to the Obama policy. Those receiving the leaks included neoconservative hawk Josh Rogin, who had just become a columnist at The Washington Post.

After Secretary of State John Kerry struck an agreement Sept. 9 that contained a provision to set up a “Joint Integration Center” (JIC) for U.S.-Russian cooperation in targeting, the Pentagon sought to reverse it. Carter grilled Kerry for hours in an effort to force him to retreat from that provision, according to The New York Times.

Lobbying against the JIC continued the following week after Obama approved the full agreement. When the commander of the Central Command’s Air Force component, Lt. Gen. Jeffrey L. Harrigan, was asked about the JIC at a press briefing Sept. 13, he seemed to suggest that opponents of the provision were still hoping to avoid cooperating with the Russians on targeting. He told reporters that his readiness to join such a joint operation was “going to depend on what the plan ends up being.”

But the Pentagon also had another motive for hitting Syrian troops in Deir Ezzor. On June 16, Russian planes attacked a remote outpost of a CIA-supported armed group, called the New Syrian Army, in Deir Ezzor province near the confluence of Iraq, Syria and Jordan. The Pentagon demanded an explanation for the attack but never got it.

For senior leaders of the Pentagon and others in the military, a strike against Syrian army positions in Deir Ezzor would not only offer the prospect of avoiding the threat of cooperating with Russia militarily, it would also be payback for what many believed was a Russian poke in the U.S. eye.

Evidence in the Investigation Report

On Sept. 16, Gen. Harrigan, who also headed the Combined Air Operations Center (CAOC) at al-Udeid airbase in Qatar, set in motion the planning for the attack on the two Syrian army bases. The process began, according to the investigation report, on Sept. 16, when Harrigan’s command identified two fighting positions near the Deir Ezzor airport as belonging to Islamic State, based on drone images showing that the personnel there were not wearing uniform military garb and, supposedly, displayed no flags.

But, as a former intelligence analyst told me, that was not a legitimate basis for a positive identification of the sites as Islamic State-controlled because Syrian army troops in the field frequently wear a wide range of uniforms and civilian clothing,

The report contains the incriminating revelation that the authorities at CAOC had plenty of intelligence warning that its identification was flat wrong. Before the strike, the regional station of the Air Force’s Distributed Common Ground System, which is the Air Force’s primary intelligence organ for interpreting data from aerial surveillance, contested the original identification of the units, sending its own assessment that they could not possibly be Islamic State.

Another prestrike intelligence report, moreover, pointed to what appeared to be a flag at one of the two sites. And a map of the area that was available to intelligence analysts at CAOC clearly showed that the sites in question were occupied by the Syrian army. Harrigan and his command apparently claimed, implausibly, that they were unaware of any of this information.

Further evidence that Harrigan meant to strike Syrian army targets was the haste with which the strike was carried out, the day after the initial intelligence assessment was made. The investigation summary acknowledges that the decision to go ahead with a strike so soon after the target had been initially assessed was a violation of Air Force regulations.

It had started out as a “deliberate target development” process — one that did not require an immediate decision and could therefore allow for a more careful analysis of intelligence. That was because the targets were clearly fixed ground positions, so there was no need for an immediate strike. Nevertheless, the decision was made to change it to a “dynamic targeting process,” normally reserved for situations in which the target is moving, to justify an immediate strike on Sept. 17.

No one in Harrigan’s command, including the commander himself, would acknowledge having made that decision. That would have been a tacit admission that the attack was far more than an innocent mistake.

The Deir Ezzor strike appears to have been timed to provoke a breakdown of the cease-fire before the JIC could be formed, which was originally to be after seven days of effective truce — meaning Sept. 19. Obama added a requirement for the completion of humanitarian shipments from the Turkish border, but the opponents of the JIC could not count on the Syrian government continuing to hold up the truck convoys. That meant that Harrigan would need to move urgently to carry out the strike.

Perhaps the single most damaging piece of evidence that the strike was knowingly targeting Syrian army bases is the fact that Harrigan’s command sent the Russians very specific misleading information on the targets of the operation. It informed its Russian contact under the deconfliction agreement that the two targets were nine kilometers south of Deir Ezzor airfield, but in fact they were only three and six kilometers away, respectively, according to the summary. Accurate information about the locations would have set off alarm bells among the Russians, because they would have known immediately that Syrian army bases were being targeted, as the U.S. co-author of the investigation report, Gen. Richard Coe, acknowledged to reporters.

Gen. Harrigan’s strike worked like a charm in terms of the interests of those behind it. The hope of provoking a Syrian-Russian decision to end the cease-fire and thus the plan for the JIC was apparently based on the assumption that it would be perceived by both Russians and Syrians as evidence that Obama was not in control of U.S. policy and therefore could not be trusted as a partner in managing the conflict. That assumption proved correct. 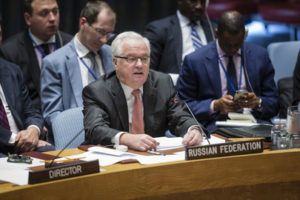 Vitaly I. Churkin, Permanent Representative of the Russian Federation to the UN, addresses the Security Council meeting on Syria. Sept. 25, 2016. (UN Photo)

When Russia’s ambassador to the United Nations, Vitaly Churkin, spoke to reporters at a press briefing outside a U.N. Security Council emergency meeting on the U.S. attack on Syrian troops, he asked rhetorically, “Who is in charge in Washington? The White House or the Pentagon?”

Seemingly no longer convinced that Obama was in control of his own military in Syria, Russian President Vladimir Putin pulled the plug on his U.S. strategy. Two days after the attacks, Syria announced, with obvious Russian support, that the cease-fire was no longer in effect.

The political-diplomatic consequences for Syrians and for the United States, however, were severe. The Russian and Syrian air forces began a campaign of heavy airstrikes in Aleppo that became the single focus of media attention on Syria. In mid-December, Secretary of State Kerry recalled in an interview with The Boston Globe that he had had an agreement with the Russians that would have given the United States “a veto over their flights. …” He lamented that “you’d have a different situation there now if we’d been able to do that.”

But it didn’t happen, Kerry noted, because “we had people in our government who were bitterly opposed to doing that.” What he didn’t say was that those people had the power and the audacity to frustrate the will of the President of the United States.

22 comments for “Pushing for a Lucrative New Cold War”