While there were many reasons for Donald Trump’s surprise victory, a particularly ugly one was his success in touching the raw nerve of white racial animosities, writes Lawrence Davidson.

There is little doubt that white racism played a role in the U.S. presidential election of 2016. As Zach Beauchamp demonstrates in a Nov. 10 article at Vox.com, enthusiastic support for Donald Trump – 10 on a scale of 10 – among white voters in mostly white geographic areas was about 25 percent. However, in areas of growing ethnic and racial diversity, the percentage of all-in Trump support goes way up.

Beauchamp quotes the research of the University of London scholar Eric Kaufmann, who surveyed Trump’s white supporters. Kaufmann’s original findings are reported in the policy blog of the London School of Economics. One result was that in areas that had experienced a 30 percent rise in Latino population, the number of whites who enthusiastically supported Trump rose to 70 percent.

Trump’s own racism had been on public display during his entire campaign and often (although erroneously) merged the phenomena of immigration and violence. Here he found a ready and responsive audience. Beauchamp goes on to demonstrate that white supporters of Donald Trump saw immigration and terrorism as the country’s major problems.

Moreover, they connected these two issues to their fear of the country’s growing diversity. Of course, economic woes were also a concern, but they too were exacerbated by fear of the fact that the country was under the leadership of a black man, Barack Obama.

Then, to broaden their outlook of the xenophobic and sectarian impact on politics, both Beauchamp and Kaufmann point out that the racist underpinning of Trump’s electoral success parallels the Brexit voting patterns in the United Kingdom in June 2016. There too, ethnocentric “anxiety over a changing society” appears to have spurred on the vote to leave the European Union.

Brexit is not the only telling parallel to a Trump-style popular racist appeal. Indeed, if you are looking for someone whose bigoted outlook and unethical political practice comes close to Donald Trump’s, you can go to Israel and Prime Minister Benjamin Netanyahu. 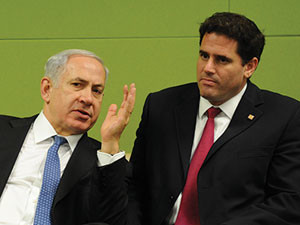 Netanyahu stood for reelection in March 2015. His main opponent was Labor Party leader Isaac Herzog. During the election campaign, one of Herzog’s consultants was the American political adviser Paul Begala – a longtime political ally of the Clintons. Soon after Netanyahu’s reelection Begala explained how Netanyahu had won: “He won because of race. … In the U.S. you could never get away with those kind of racist appeals. But, man, did it work [in Israel].”

He went on, “I have never seen anything like Bibi’s furious surge to the right in the last four days [of the campaign]. He had robo-calls calling the [U.S.] President ‘Hussein Obama, the Muslim,’ he had ads saying the Arabs will vote in droves. He accused Herzog of wanting to divide Jerusalem.”

The fact that “man, did it [this racist approach] work” in Israel should have been no surprise. A year later, in March 2016, a Pew Research Center survey of Israeli society reported “that nearly half of Jews in the country [48 percent] say they support the ethnic cleansing of Arabs.” The Israeli Prime Minister and fellow travelers certainly knew this ahead of the Pew report.

As it turned out, Netanyahu’s appeal to fear of the Arabs was roughly equivalent to Trump’s appeal to fear of immigrants in the United States. Begala readily recognized the importance of the racist factor in Netanyahu’s success. Where he was wrong was to think that “in the U.S. you could never get away with those kind of racist appeals.” It turned out that many white U.S. voters were as receptive to such a race-based fear campaign as were Israeli Jews. As with Netanyahu, racism helped Trump win.

Taking a broader view, we can see that the racism manifesting itself in Israel and the United States is part of a general phenomenon of reactionary populism spreading throughout the West. This fact has been recognized by the venerable and progressive Israeli commentator Uri Avnery.

In a recent column entitled “The Call of the Nation,” Avnery observes, “a DARK wave is submerging democracies all over the Western world. … fascism and populism are gaining ground all around” and doing so in the name of old-fashioned ethnocentric nationalism. After all, “for most people, the need to belong to a nation is a profound psychological need. People create a national culture, often speak a national language. People are ready to die for their nation.”

In the end, Avnery concludes that “What we are witnessing now is a rebellion of nationalism against the trend towards … a globalist world.”

The globalist trend Avnery speaks of showed its disruptive potential soon after World War II. It was then that there began a large-scale movement of peoples from poorer countries and regions into richer ones. This was often supported by Western elites because of pressing, if temporary, post-war labor needs. This was later joined by the creation of larger trans-national economic units, which saw the movement of not people, but jobs, flowing from richer to poorer countries and regions. The motive here was a search for cheaper labor markets.

For the average Western citizen it was all very confusing and frightening. Almost simultaneously they saw what appeared to be alien groups invading their local environments while, a bit later, their traditional job base was swept away to some foreign land. It was inevitable that all of this would, sooner or later, cause a backlash. In the West, this backlash would merge racism with economics – suggesting to many that economic rivalry was another form of racial competition.

The backlash has also, as Avnery suggests, released a wave of nationalist populism, with its strong ethnocentric undertones. While this movement will create a context for racist and tribalistic venting, it will not be able to do more than momentarily slow economic globalization. That will continue as long as capitalism rules our commercial, fiscal and industrial lives. So, economically, it is one world in the long run.

Seeing these two – racist nationalism and economic globalism – in juxtaposition is important. Racist nationalism as it now expresses itself in the U.S., Israel, the United Kingdom and the European continent has the ability to make a profound mess of local politics. It can, and no doubt will, undermine democratic virtues such as civil and human rights. It will probably undermine the rule of law itself.

Yet, the very thing it fears the most, the one-world economic process, will certainly go on apace. And, because of the weakening of political and legal rights at the hands of racist and authoritarian governments, in the long run we will all end up more exposed to economic exploitation than we ought to be.

That will prove to be a very high price for whatever emotional satisfaction your stalwart white nationalist may now feel.

← How America Disgraces Itself
American Martyr to Right-Wing Repression →

27 comments for “The Rise of White Racial Nationalism”