If President-elect Trump truly intends to “make America great again,” a promising route is to encourage major investment in clean-energy jobs that can both rebuild manufacturing centers and help the environment, writes Sam Parry.

In the 2016 election, white working class voters swung heavily from Hillary Clinton and the Democratic Party and voted for a big-mouthed, hot-tempered, New York City billionaire who ran the most overtly xenophobic campaign since the days of George Wallace. Many are blaming a generation of Democratic political leaders for supporting corporate friendly, free-trade policies, which in turn are blamed for gutting America’s manufacturing base.

Indeed, even while the American economy shed 5 million manufacturing jobs since 2000, nearly all of those job losses occurred during George W. Bush’s presidency and the Great Recession. Since March 2010 when manufacturing jobs bottomed out at 11.453 million, America has gained back more than 800,000 manufacturing jobs. And the unemployment rate in the manufacturing sector is lower than the economy as a whole.

So why did white working-class voters, particularly in the industrial Upper Midwest, swing so heavily against Hillary Clinton and the Democrats? And what, if anything, can Democrats do to win them back?

Putting aside the major cultural issues at play, from gun control to environmental regulations to empowering women and minorities in our society, when it comes to a jobs plan, there is one gigantic opportunity available right now to any politician with the courage to comprehensively and passionately embrace it: Unleashing a clean energy economy for the Twenty-first Century.

Even without a robust national clean energy deployment plan, renewable energy is booming in the United States. The number of jobs in the solar industry alone has more than doubled since 2010, from about 100,000 to 209,000 — and is expected to double again by 2020. There are more Americans now employed in solar than in the oil and gas industry or in coal.

While much of this growth in solar energy has taken place in sunny California, which has by far the most comprehensive and aggressive climate and clean energy standards in the country, clean energy jobs are surging nearly everywhere. The Solar Foundation reports that states as varied as Massachusetts, Tennessee and Utah saw some of the largest percentage increases in solar employment in the last year.

Wind energy has seen similar growth with installed capacity booming seven-fold over the last decade. In 2015, wind represented 41 percent of all new energy capacity in the U.S., more than any other energy source. And there are now nearly 50,000 utility-scale wind turbines in 40 states plus Puerto Rico. Over the last 10 years, $128 billion has been invested in new wind energy projects.

California is again near the top when it comes to wind energy – but Texas is way out in front with three-times more installed wind energy capacity than California. And the much smaller state of Iowa comes in second with California falling to third followed closely by Oklahoma.

There are fewer Americans employed in wind energy jobs – 88,000 according to the American Wind Energy Association. But there are more than 500 wind-related manufacturing facilities spread across the country with scores clustered in the very heart of the Upper Midwest where the white working-class rebellion wiped out Hillary Clinton and the Democrats. 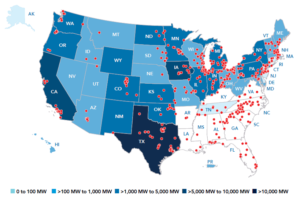 All this is happening mostly organically with only modest support from the federal government in the form of a renewable energy tax credit combined with the Obama administration’s efforts to reduce carbon and other dangerous pollution from coal-fired power plants.

Just imagine what an ambitious, all-in World War II style mobilization would look like if we were to aggressively invest in a massive national clean energy installation and modernization program.

In fact, such a thought experiment was already performed in a 2011 article from CleanTechnica, a leading clean energy technology news and analysis website. They imagined what it would cost to put solar panels on the roofs of every home in America. Turns out, the $2.2 trillion price tag is only about half what we will have spent in the wars in Iraq and Afghanistan.

What would we get for this investment? They estimate we would have manufactured and installed 1.7 billion solar panels, saved the average U.S. homeowner $357/year on their electricity bills, and reduced our use of fossil fuel power plants by 11 percent. 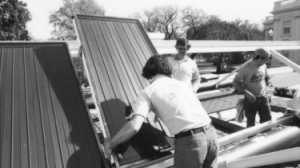 President Jimmy Carter’s solar panels being installed on the White House roof in the 1970s. They were later removed by President Ronald Reagan in the 1980s.

But these estimates were assuming a cost of $3.85/watt installed, the average cost for residential solar panels in 2011. The article also estimated a scenario in which installed solar panels would cost $2/watt installed, which is now very feasible based on today’s more efficient panels and given economies-of-scale savings.

At $2/watt installed, the cost of the project would fall to $1.67 trillion, about a third of what we will have spent on the wars in Iraq and Afghanistan. And these more efficient panels would generate nearly two-thirds of electricity usage in the U.S., producing a total cost savings of $1,986/year in the average American’s home electricity bill.

A similar 2011 study by venture capitalist David Anthony and material scientist Tao Zheng examined this question in more detail, envisioning 100 percent market penetration of rooftop solar by 2030. According to their estimates, this would generate more than 5 million jobs and generate one-third of all electricity used in the U.S.

These are only the direct jobs generated in installing and maintaining rooftop panels. There would be many more jobs created in manufacturing and transporting the panels, making roof repairs/modifications, and all the secondary jobs that would come from this economic activity.

And residential rooftop solar is just one part of one sector of the clean energy economy. There are millions of other jobs waiting to be created in expanding wind energy, deploying utility scale solar, modernizing the electric grid, retrofitting buildings to improve efficiency, and tapping geothermal and other clean energy sources.

States like West Virginia, Pennsylvania and Ohio don’t have as much wind potential, but there are hotspots in these states, too. And they each have seen some increased installed wind energy capacity in recent years. But not nearly enough. Instead of mountain-top removal to produce coal, imagine mountain-top wind installed throughout Appalachia. These are jobs waiting to be filled. This is economic opportunity waiting to be seized.

And as the cost of renewable electricity drops, the use of electric cars will become more attractive, spurring innovation and economic activity in the auto sector. The expansion battery storage units will help drive down those costs and boost battery manufacturing.

These are jobs ranging from cutting-edge laboratory research to hard-hat installation, from factory-line workers and truckers to scientists and economists. The money we will all save in our monthly electricity bills can be spent on family vacations or new clothes or new furniture. Maybe even a night class to learn a new skill. All creating more economic growth.

To her credit, Hillary Clinton ran on a plan to install a half a billion solar panels across America, about a third of what CleanTechnica estimated would be required to put solar panels on every roof in America. Buried on page 45 of the Democratic Party platform, the DNC called for “forging a robust global solution to the climate crisis,” and promised to lead “a global effort to mobilize nations to address this threat on a scale not seen since World War II.” And, even though not a single debate moderator asked about climate or clean energy in any of the debates, both she and her running mate, Tim Kaine, made an effort to inject the issue into their debates.

Many Democrats and even a few Republicans have offered a range of market-based climate solutions over the last two decades. Environmental leaders have touted the economic benefits of a national program to promote clean energy and curb pollution.

But no national political leader has been bold enough to offer a detailed, World War II-style, national clean energy mobilization effort as the centerpiece of a broad-based manufacturing and economic revitalization political agenda. No one has offered a plan to invest trillions of dollars to supercharge and accelerate the transition to clean energy across the country.

The time has come for a big, bold vision to unleash this pent-up potential. With bold leadership and the political willingness to go big, we can get America’s factories humming to harness the wind and solar potential throughout America, from the Upper Peninsula to Appalachia to the Great Plains to the Deep South. There are millions of jobs waiting to be created for young and old, white and black and brown, men and women, Republicans and Democrats.

Oh, and there’s the earth’s climate waiting to be saved.

Sam Parry has worked in the environmental movement for nearly two decades and is co-author of Neck Deep: The Disastrous Presidency of George W. Bush.

26 comments for “How Clean Energy Can Create Jobs”