Ironically, as Americans commemorate how Native Americans helped save the Pilgrims in 1621, Indian-rights activists are under attack today in defense of land that a 1868 treaty guaranteed as theirs, observes Nat Parry.

Making official a quintessential American tradition dating back to the 1621 feast between the Pilgrims and the Wampanoag tribe, President Abraham Lincoln in 1863 declared the last Thursday of November to be the national day of Thanksgiving – a vain attempt to unite the North and South at the height of the Civil War.

Five years later, continuing a closely paralleled American tradition, the U.S. government signed the Fort Laramie Treaty of 1868, which established the Great Sioux Reservation west of the Missouri River and promised no more white settlement in a huge, 18-million acre swath of land. 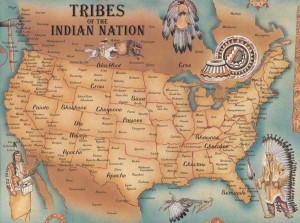 More than a century later, in 1980, the U.S. Supreme Court ruled that the government had illegally taken this land, and awarded $120.5 million to the Sioux Nation, based on the market value of the land in 1877, plus interest. For nearly four decades, however, the Lakota Sioux have refused to accept payment and instead continued to demand that the United States return the territory.

Today, the Sioux people are continuing to take a stand on these principles – the flashpoint now being the Dakota Access Pipeline, which, upon its completion is expected to transport some 470,000 barrels of crude oil a day across several states. Sioux tribe members and their allies have protested this pipeline for months, raising concerns about the threat it poses to their water supply, the effects that the fracked oil will have on the climate, and the process by which the project was approved, saying that it failed to take into account Native rights.

“We live with so many broken promises, there’s no reason for it,” said Dave Archambault II, chairman of the Standing Rock Sioux tribe. “We understand what lands we own, and what lands were illegally taken from us.”

The government, of course, is responding the way it always has to Native American resistance – through brute force. Over the past few months, police and private security forces have viciously suppressed the water protectors, siccing dogs on them and arresting them for “trespassing.” The repression, which a group of United Nations experts called “excessive” and “increasingly militarized,” culminated Sunday night in some of worst violence against Native people seen since the 1973 siege of nearby Pine Ridge Reservation in South Dakota.

The police assault led to several reported cases of life-threatening hypothermia. “It is below freezing right now and the Morton County Sheriff’s Department is using a water cannon on our people – that is an excessive and potentially deadly use of force,” said activist Dallas Goldtooth.

Every aspect of this appears to violate the letter and spirit of the 1868 Laramie Treaty, in which the federal government not only promised to respect Sioux land rights, but also to come to the aid of Native people if they are wronged by outside forces.

At this time of Thanksgiving, it would only be appropriate for President Barack Obama to insist that the “bad men” who are committing wrongs “upon the person or property of the Indians” stand down immediately, as well as to halt the construction of the Dakota Access Pipeline and reimburse the Sioux for losses already sustained.

Then, perhaps, the shameful tradition of breaking treaties while giving thanks might itself be broken, and Americans might be able to enjoy their turkey dinners and family reunions without a cloud of hypocrisy hanging over their heads.

Nat Parry is the co-author of Neck Deep: The Disastrous Presidency of George W. Bush. [This story originally appeared at Essential Opinion. To support the DAPL protesters, click here.]

47 comments for “A Tradition of Forgetting Indian Rights”