On both sides of the Atlantic, a battle is underway between largely discredited “elites” and sometimes disreputable “nationalists,” a conflict over un-kept promises about the future and unsettling memories of the past, writes Andrew Spannaus.

In recent years “nationalism” has become a bad word in Europe, a synonym of closure, racism and wars. Over the past 20-25 years European elites have instead embraced a concept of globalization based on a world without economic, physical and social borders.

This view assumes the gradual affirmation of a set of shared values internationally, consisting of human rights and economic freedom, that however much the remaining closed, autocratic regimes may try, will inevitably become the standard for the entire world.

It is essentially the argument put forward by Francis Fukuyama in “The End of History:” liberal democracy and free markets have won the ideological war, and represent the culmination of human evolution.

The political events of 2016 are upending this view of the globalization of human rights and economic liberalism. The American electorate has supported a series of outsiders – most notably Donald Trump, who has run his campaign in direct opposition to the U.S. political and financial class, invoking economic protectionism and a stronger national identity.

Against expectations, the population of the United Kingdom voted to leave the European Union, marking an irreparable break in the supposedly inevitable process of European unification. And across Europe support is growing for more extreme, anti-system political forces, that threaten not only to withdraw from the common currency – the Euro – but also to seal the borders in response to economic and security threats associated with immigration.

It is no exaggeration to speak of the failure of the entire transatlantic political establishment. Since the 1970s, Western economies have undergone a post-industrial transformation that has favored short-term gain over long-term investment. The notion of economic freedom has translated principally into support for deregulation and speculative finance. 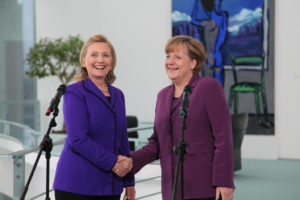 Central Banks have made unlimited resources available to the financial sector while large areas of the real economy struggle to survive, feeding discontent among the population. It is true that new economic sectors have arisen, along with widespread changes made possible by technologies that were inconceivable until a few years ago, but the overall effect has been to hollow out the middle class and create large-scale income equality.

In Europe, the principal vehicle of this process has been the economic policy of the European Union. From the implementation of the Maastricht Treaty in 1993, European nations have been stuck in a monetary straitjacket, that prevents governments from taking effective economic action. In the name of market principles, liberalization has been implemented that favors large financial interests while lowering standards of living for the middle class.

Countries are constitutionally required to move towards a balanced budget, with the European Commission and the European Central Bank essentially having veto power over national policies. This has translated into harsh austerity, including the massive budget cuts and tax increases inflicted on countries such as Greece, Spain and Italy in recent years.

Despite paying lip service to the need for change, the economic and political elites have refused to abandon this approach, that not only ignores the suffering of the population, but actually makes the problem worse. In fact the austerity causes a drop in economy activity and thus exacerbates budget problems, leading to a vicious cycle that Europe seems unable to stop.

The resulting backlash is calling into question the process of European integration as a whole, provoking a strenuous defense by the elite of institutions that are said to have guaranteed “50 years of peace” after the Second World War.

It is true, of course, that there are some benefits to E.U. integration, and that nobody wants to return to a situation of conflict among the member states. But the current policies are quite different than the fruitful cooperation that existed until the 1990s, when the financial elite began its move to exert supranational control.

Now, the failed economic policies of the past 20 years are no longer sustainable. Governments are forced to negotiate over .1 percent of the budget deficit with the bureaucracy in Brussels, while the need for public and private investment runs in the trillions.

The pro-finance, anti-production policies must change not for ideological reasons or to serve some specific interest group; they must change because there is no other choice. People are revolting against a political class that does not respond adequately to widespread economic and social discontent. In times of economic distress the population becomes more vulnerable to demagogues, raising the risk of dangerous outcomes, as seen with Fascism and Nazism in the 1920s and 1930s.

Currently, there are unprepared and unpredictable political forces with growing support across Europe, that in some cases represent a threat to the democratic rights and values that the European Union aims to promote. Defending the orthodoxy of E.U. policy against popular movements that target failed economic policies, will only further damage precisely those values on which Europe is said to stand.

At this point Europe needs a return to measures that promote productive investment and innovation, rather than cut social welfare programs and encourage further deregulation.

There are two potential directions: a wholesale change in the policies of the E.U. institutions, without modifying their essential structure, or a step back from the process of cancellation of national sovereignty.

The first option seems unrealistic, for various reasons. These include the constitutional nature of many economic and budget constraints, and the stubbornness demonstrated by the European ruling class in recent years; a class that, despite numerous alarm bells, does not at all seem ready to abandon an elitist view of globalization.

The response to the Brexit vote is a glaring example. Representatives of the E.U. institutions lashed out with arrogance and bitterness, essentially accusing half of the British population of being ignorant, racist and isolationist. It’s a comforting excuse based on partial truths, that avoids reflection on Europe’s own mistakes.

At this point a return of decision-making power to national governments is becoming inevitable: not in order to stop international cooperation, or to reject shared values, but because the model pursued by the supranational institutions and their allies in the financial world has failed, and risks producing both serious internal conflicts, and unacceptable strategic failures in an increasingly complex world.