The current election campaign has done more to set back U.S. foreign relations, and the cause of good foreign policy, than has any other American presidential election within memory. One reason is the overall sordid image of American democracy in action that is being projected to people around the world, and to governments with an interest in exploiting that image.

The ugly picture includes the amount of attention given — unsurprisingly and necessarily so, given the character, comments, and conduct of Donald Trump — to such things as allegations of a candidate sexually assaulting women.

Even more damaging in terms of the picture being projected overseas is what Trump has done to the part of that picture involving the essential standards and practices that make American democracy work and keep the country politically stable. What separates the United States in that respect from many supposed democracies that are far less stable are peaceful transitions of power and respect for the will of the people as expressed in elections.

This means that losers gracefully accept election outcomes, and that winners let losers walk away with freedom to campaign again another day. That’s much different from countries where losers launch insurgencies or winners throw their opponents in jail.

Trump has attacked both of those American standards of behavior. On the first, he has incessantly told his followers that if he loses it will be because of a rigged election, and the biggest headline coming from Wednesday night’s debate was his refusal to commit to accepting the election result.

On the second, he has led rallies at which the chants about Hillary Clinton have been “lock her up,” and in a previous debate he threatened to do exactly that if he wins. Then Wednesday night, for good measure, he said that Clinton should not have been allowed to run for president in the first place.

The projection of this picture overseas sours millions on America and the American political system, and the United States loses some of its soft power as a result. Many get soured on democracy in general. And governments that have good reason to be defensive about their own political processes gleefully exploit the picture to divert attention from their own deficiencies and to accuse the United States of double standards.

Iran-watcher Robin Wright notes that “Iran’s media has generally been obsessed” with the U.S. election even more than with Iran’s own presidential election due next spring. Supreme leader Ali Khamenei has tweeted, “US presidential race & issues two candidates raised is a typical result of lack of spirituality & faith among those in power.” 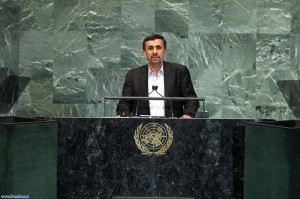 Wright reports that “Trump’s allegations that the U.S. election is rigged have particularly resonated across Iranian media,” partly in revenge for foreign allegations of election fraud when Mahmoud Admadinejad won the Iranian presidency in 2009.

And the hardline clerics on the Guardian Council, who have routinely disqualified presidential and parliamentary candidates whose politics they don’t happen to like, undoubtedly were smiling Wednesday night when Trump said Clinton should not have been allowed to run.

Another blow to well-formed foreign policy and a public that is well-informed about it has been the torrent of falsehoods, overwhelmingly from Trump, that has encouraged not just ignorance but firmly embedded misbeliefs about important foreign policy issues. In Wednesday night’s debate, for example, Trump repeated a previous blurt about how the nuclear agreement with Iran, which closed previously open pathways to a nuclear weapon and subjects Iran to the most severe restrictions and monitoring of a nuclear program that any country has ever accepted, supposedly would guarantee that Iran would get the bomb.

Amid the umpteenth claim by Trump about opposing the Iraq War and all the other charges being hurled across the stage, Clinton never got back to commenting on that subject herself. And so not just a mistaken, but a completely upside-down, notion of what the agreement with Iran is all about has been further cemented in the minds of many Americans and especially Trump’s followers.

Such problems are related to the overall low amount of time and attention devoted to foreign policy in this campaign, except insofar as it involves immigration, trade or terrorism. In some previous elections, an entire presidential candidates’ debate was devoted to foreign and security policy.

This year the pattern was exemplified by Wednesday night’s debate, in which just one of six issue areas identified by moderator Chris Wallace was “global hot spots,” which translated more narrowly into a question about Aleppo and U.S. troops in Iraq.

Even the Iraq-Syria theater got nowhere the attention it needs. When Clinton talked about her backing for a no-fly zone in Syria, Wallace appropriately challenged her to justify that position given that the incumbent president and the chairman of the Joint Chiefs of Staff have resisted creating such a zone, but Clinton deflected the challenge with a non-answer. And so an important question, one that will face the new president early and on which there are legitimate arguments on each side, was left unexamined.

The damage to U.S. foreign relations, foreign policy and public understanding of foreign policy that has already been done in this campaign will persist past the campaign’s end. Still more damage probably is yet to come. How a losing Donald Trump reacts on Election Night will partly determine that, but there are additional ways in which venomous domestic politics have repercussions beyond U.S. borders.

If Hillary Clinton is victorious next month, she will be the first non-incumbent Democrat to win an election to succeed another Democrat since James Buchanan won in 1856. Buchanan also was the last previous president to have been secretary of state.

But however well that experience may have equipped him to formulate and conduct foreign policy, domestic divisions overwhelmed everything else during his single term of office. The slavery issue, with war drums of the coming Civil War already being heard, sapped energy from other initiatives. Buchanan’s foreign policy, which was centered mainly on Latin America, was as undistinguished as the rest of his presidency.

Even if a reprise of the Civil War is unlikely, poisonous and divisive domestic politics are likely to be at least as big a challenge to a President Hillary Clinton in trying to sustain a coherent and effective foreign policy as will be any threats overseas.

41 comments for “Embarrassing America Before the World”