America is a place that expunges unpleasant memories that belie the happier vision of its “exceptionalism,” most notably the brutal ugliness of the Vietnam War and more recent war crimes in the Middle East, observes Michael Brenner.

How collective memory is formed, and the crucial influence it exercises on the way a people orient themselves toward the world, is the subject of a fascinating new book by Viet Thanh Nguyen – author of the brilliant novel The Sympathizer. His probing exploration of the differing experience of the Vietnamese (on the two sides) and the Americans in what has been assimilated from their encounter over a period of roughly 15 years offers insight into the make-up of each nation as well as casting light on the mechanisms by which collective memory takes shape.

In this sense, national memory is intimately bound up collective identities before and after the experience. It is a dynamic cultural phenomenon wherein politics per se plays a subordinate part.

While reams of studies have concentrated on the “lessons of Vietnam” in terms of foreign policy, military doctrine and so-called nation-building – relatively little attention has been paid this deeper process. Wars are trauma. They shake societies to their roots – especially when they are protracted, follow no established script and conclude with an unprecedented outcome. Those are features of the American experience in Vietnam and about Vietnam. One might naturally expect that the after-effects would cut deep into the national psyche and endure. Yet, oddly there is little evidence of that.

Americans are largely as oblivious to the war’s consequences as they are ignorant of its events. This is true not only now, but was discernible decades ago. Yes, many visit the moving memorial in Washington, veterans of the war are powerfully affected by grazing their fingers across the gilded names and conjuring visions of those long lost. Relatives stare with silent emotion at photographs half-a-century old. That, though, is a very small minority of citizens.

While many served, casualties were low relative to population or to World War II. Disruption, much less sacrifice, at home was minimal. The graphic images played on television screens are effaced over time and anyone under 50 never has seen them.

Most significant, the country has made a systematic effort to forget – to forget everything about Vietnam. Understandably, since most of it was ugly – on every count. Textbooks in American history give it little space; teachers downplay it; television disregards it as retro; Hollywood has other fish to fry as it strains and struggles to bring our more recent wars in the greater Middle East into line with American myth and legend.

All we have are cinematic antiques like The Green Berets, Deerhunter and the weird Apocalypse Now. Each stirred American feelings (in different ways) for a time before disappearing over the emotional horizon. One could speak of displacement were it not that Vietnam was expunged from the collective memory book well before 9/11, Iraq and all that.

Even the most graphic images have proven transient. That came home for us just a few weeks ago when Facebook expunged the infamous picture of a young girl, her clothes burnt off her scorched body, fleeing in terror from her napalmed village. No one in the company recognized it as other than child pornography posted by a pedophile of the S&M variety. “Zuck,” America’s favorite genius, and his fellow ignoramuses in Menlo Park, were clueless. And that’s a guy who allegedly spent four years at Harvard. [Phan Thi Kim Phuc, still living in Vietnam, does not mind the photo being displayed.] 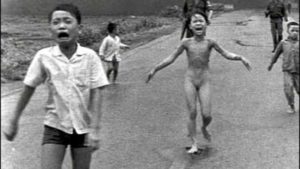 Nick Ut’s famous photo of terrified South Vietnamese children fleeing from a napalm attack on the village of Trang Bang in 1972. The girl, Phan Thi Kim Phuc, has ripped off her burning clothes.

In a sense, the most noteworthy inheritance from the post-Vietnam experience is the honing of methods to photo shop history. Vietnam was a warm-up for the current  more thorough, systematic cleansing that has made palatable Presidential mendacity, sustained deceit, mind-numbing incompetence,  systemic torture, censorship, the shredding of the Bill of Rights and the perverting of national public discourse – as it degenerates into a mix of propaganda and vulgar trash-talking. The “War on Terror” in all its unsavory aspects.

The great innovation we Americans have made in the handling of collective memory is cultivated amnesia. That is a craft enormously facilitated by two broader trends in American culture: the cult of ignorance whereby a knowledge-free mind is esteemed as the ultimate freedom; and a public ethic whereby the nation’s highest officials are given license to treat the truth as a potter treats clay so long as they say and do things that make us feel good.

So our strongest collective memory of America’s wars of choice is the desirability – and ease – of forgetting them. “The show must go on” is taken as our imperative. Or “find closure” in the convenient pop psychology jargon that our elites favor. That is to say, the pageant of American life must go on: shopping, spectating, ogling celebrities; grabbing riches where and however we can; and titillating ourselves with games of every sort – sex, fantasy football and Pokeman being the outstanding examples.

The tumult that shook American in the late 1960s and early ‘70s had Vietnam as one epicenter – civil rights at the other. The rebellion in politics intersected the simultaneous youth rebellion in numerous complicated ways. One fed off the other. Each seemed poised to recast the United States’ collective identity – or at least transform it in significant respects. From today’s vantage-point, those expectations clearly were misplaced – whether one viewed them with hope or anxiety.

In regard to how we relate to the rest of the world, there is no discernible change whatsoever. The overweening pride, the belief in American exceptionalism – as duty and/or prerogative, the penchant for using military force, the self-righteousness, the double standards applied in politics and ethics – they remain hallmarks of our foreign policy.

Back to Picking Fights

That truth has been demonstrated in the Middle East, in the yen for picking fights with Russia, Iran or whomever, in our sub rosa interventions in Latin America. These days that is done without the Cold War justification of our facing a diabolical threat to our core interests (even survival) as the Soviet Union and/or Red China supposedly did. Instead we have the disorganized Salafist thugs with a penchant for acts of terror – 98 percent of them abroad. By no measure can so-called Islamo-Fascism be equated Soviet-led international communism (actual or imagined). On this score, America has become more belligerent than it was in 1968.

On the other side of the equation, today’s university campuses are more like the 1950s than 1965-1972 – as far as collective action is concerned. Almost no one protests our mindless wars, or draconian surveillance, or administration’s kow-towing to reactionary state legislators and other forces pushing hard for the vocationalizing of higher education. Only identity issues stir a modicum of student interest.

In the cultural domain, we observe a different story unfolding. But one with strange plot twists. If we think of what altered American life the most since that date, we have to put “the pill” and the behavioral revolution that it encouraged at the apex. At the personal level, that change has been dramatic and enduring. The same, though, does not hold for associated aspirations as regards life-style. Quite the opposite.

In this society of the new nihilism, the ideal of humanistic equality is viewed as a quaint irrelevancy – like tie-dye paisley t-shirts. Our bimodal culture is anchored at its ends by gross billionaires and the burgeoning tattooed proletariat.

The one saving grace of the era which has brought to fruition 1960s hopes and expectations is the dedication to racial and ethnic tolerance. This proposition holds even in the year of Trump. The evidence is all around us – despite the disturbing headlines of outlaw police, the vicious racist attacks on Barack Obama, and the vicarious lynching of Mexicans and Muslims at Tea Party rallies. Step back and recall the state of affairs 50 years ago.

What we are seeing is the recrudescence of old, tarnished half-buried passions that have been brought back to life by the new-found insecurities of American life. Some insecurities are financial – the institutionalized gig economy (sweated labor), some stem from the renewed crisis in white masculine identity paradoxically heightened by the sexual revolution and its deformations in pop culture, some by the multiple neuroses pervading a country that has lost solid points of reference. Some have been stirred by politicians and self-seeking hustlers in the media or business on the make.

President George W. Bush in a flight suit after landing on the USS Abraham Lincoln to give his “Mission Accomplished” speech about the Iraq War on May 1, 2003..

And some of this flailing about is due to the fraying of the myths that have given meaning to the American experience all these years. Those myths are bound up with the country’s unique place and mission in the world. Now untenable, the inability to come to terms with awakened awareness of realities that should have been evident in 1975 adds markedly to what haunts us.

Cultivated amnesia in effacing collective memory did not serve the nation well. It will harm us even more – going forward. It cannot be otherwise among those masses of Americans who see memory itself as a threat to the precious autonomy to live in the instant. Poking at their smart watches to recall the home address they text to the robot who sends an automated Uber taxi, they have closed off all mental space for pondering Tet, the Mekong, Pol Pot, My Lai and those fellow countrymen who fell in the misbegotten quest for an imagined America.

And the national memory book already is closing, too, for Guantanamo, Fallujah, Abu Ghraib, “black” torture sites, Bush’s puerile “Mission Accomplished” stunt, and Obama’s hacking of the Senate Intelligence Committee to better serve the CIA’s extra-legal machinations abroad and spying at home. (Really? When did that happen?) In compensation, we’ll always have Zero Dark Thirty and The Sniper to cuddle with.