Exclusive: The mainstream U.S. media has largely ignored a U.K. report on the West’s lies used to justify the Libyan “regime change,” all the better to protect the ongoing falsehoods used in Syria, as James W Carden explains.

Earlier this month, a select committee of British parliamentarians released a report which condemned the U.K. government under David Cameron for its role in the 2011 NATO intervention in Libya. The report makes plain that the principal basis on which the intervention was predicated – that then-Libyan dictator Muammar Gaddafi was on the verge of committing a wholesale slaughter of the rebel stronghold Benghazi – was a lie propagated by Western and Gulf State media outlets.

It also shows the extent to which the crisis was driven by Libyan exiles who – perhaps quite understandably – had an axe to grind with the Gaddafi regime. In this – and in other ways, as we shall see – the Libyan crisis shares a number of similarities with the Syrian crisis. Indeed, it would be fair to view the debacle in Libya as a dress rehearsal for the war outside powers have been waging against the sovereign government of Syria for the past five years.

The U.K. report documents the extent to which the narrative of impending genocide was driven by the delusions of Libyan exiles: “Libyan exiles based in France were influential in raising fears about a possible massacre in Benghazi. Visiting Professor at King’s College London, Professor George Joffé, told us that ‘the decisions of President Sarkozy and his Administration were driven by Libyan exiles getting allies within the French intellectual establishment who were anxious to push for a real change in Libya.’”

Indeed, the U.K. Select Committee was told that “émigrés opposed to Muammar Gaddafi exploited unrest in Libya by overstating the threat to civilians and encouraging Western powers to intervene.”

The narrative crafted by Libyan exiles was swallowed hook, line and sinker by a willingly credulous Western press. Similarly dynamics were at play during the initial phase of the crisis in Syria.

Professor Tim Anderson of the University of Sydney notes that Syrian clerics in exile in Saudi Arabia, like Sheikh Adnan Arour “called for a holy war against the liberal Allawi muslims” who dominated the Assad government.

The journalist Eva Bartlett, who has been on the ground in Syria, has written that the problem with many of the Western media accounts of the Syrian crisis is that “Many talking heads draw from one sole source, UK-based Syrian Rami Abdulrahman of the so-called Syrian Observatory for Human Rights (SOHR).”

Abdulrahman, who runs the oft-quoted SOHR out of his home in Coventry, England, “hasn’t,” according to Bartlett, “been to Syria for 15 years.” What is more, Abdulrahman’s operation is reliant on the reports of opposition figures. This, as Bartlett notes, is no impartial source.

Other exile groups, like the Syrian National Council, has received millions of dollars in funding from the declared enemies of the Assad regime like Qatar and UAE. Meanwhile, regime change groups like the Aleppo Media Centre (AMC), the Washington-based Syrian Expatriates Organization (SEO) have, according to Anderson, received “hundreds of thousands of dollars in donations from un-named sources.”

Professor Anderson tells us that “Like many other U.S.-created front groups (The Syrian Campaign, the White Helmets) the SEO is committed to the overthrow of the Syrian Government. That also happens to be the aim of the U.S. Government.”

Machiavelli was perhaps righter than he knew when he wrote: “how dangerous a thing it is to believe those who have been driven out of their country … such is the extreme desire in them to return home, that they naturally believe many things that are false and add many others by art.”

And then there is the role Western media has played in ginning up the twin crises. The U.K. report on Libya – citing Amnesty International – notes that, “Western media coverage has from the outset presented a very one-sided view of the logic of events, portraying the protest movement as entirely peaceful and repeatedly suggesting that the regime’s security forces were unaccountably massacring unarmed demonstrators who presented no security challenge.”

In fact, the opposite was the case: security forces in both Libya and Syria came under attack by Islamist radicals from the very start: these were hardly the “peaceful” protests as portrayed by the Western media. As the U.K. report points out, “It is now clear that militant Islamist militias played a critical role in the rebellion from February 2011 onwards.”

Likewise, the dominant myth surrounding the Syrian crisis is that “millions” of peaceful Syrians took to the streets as part of the liberalizing wave which roiled the Arab world in the spring of 2011. Human Rights Watch declared that the Syrian protesters “only used violence against the security forces” as a “last resort.”

Indeed, all of the violence which soon unfolded was said to be the fault of Assad’s police state and Assad’s subsequent refusal to step down –  so the story goes – is one of the main causes of the growth in strength and numbers of radical Islamists terrorists.

As recently as last summer, none other than former Prime Minister David Cameron called Assad a “recruiting sergeant for ISIS.” And while this claim is as nonsensical as it is disingenuous, it is a line which has been dutifully echoed by former Secretary of State Hillary Clinton, who in April told CNN that “ISIS was primarily the result of the vacuum in Syria caused by Assad first and foremost.”

From the very start, the opposition to Assad included sectarian extremists who chanted: “Christians to Beirut, Alawis to the grave.” And the first documented incidents of violence in Daraa were against, not by, the Syrian security forces.

Professor Anderson cites an Israel National News report from March 21, 2011, which told of “Seven police officers and at least four demonstrators in Syria have been killed.” Anderson notes, “The armed forces came to Daraa precisely because police had been killed by snipers.” [emphasis mine]

The journalist and analyst John Rosenthal translated a Jan. 12, 2012 report from Homs by a Dutch Jesuit, Father Frans van der Lugt, who was later murdered, likely by al-Nusra militants, in April 2014.

The Jesuit missionary observed that: “Most of the citizens of Syria do not support the opposition. … you also cannot say that this is a popular uprising. The majority of people are not part of the rebellion and certainly not part of the armed rebellion. What is occurring is, above all, a struggle between the army and armed Sunni groups that aim to overturn the Alawite regime and take power.

Also inconvenient to the dominant narrative is the fact that even after the large scale anti-government protests and escalation in violence, 55 percent of Syrians polled in 2012 wanted Assad to remain in power.

With all of this in mind we would do well to treat reports from the likes of CNN’s Clarissa Ward with a healthy amount of skepticism, not least because the fact that Islamists were involved from the very start of both the Libyan and Syrian uprisings have been relentlessly excised out of the dominant, acceptable mainstream narratives like hers.

When one considers the policy alternatives which were rudely shunted aside in favor of violence, the twin catastrophes in Libya and Syria appear all the worse in retrospect. Instead of strictly adhering to the UN-mandated arms embargo in Libya, the U.K. Select Committee reports that: 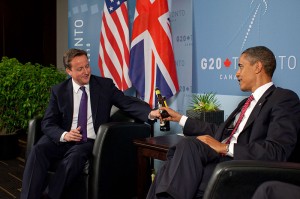 “we were told that the international community turned a blind eye to the supply of weapons to the rebels. Lord Richards [UK Defence Chief of Staff] highlighted “the degree to which the Emiratis and the Qataris … played a major role in the success of the ground operation.”

Likewise, the Syrian arms embargo was only selectively and fitfully enforced. From May 2011 to June 2013, the E.U. imposed an arms embargo on Syria but, according to the Stockholm International Peace Research Institute, by April 2013 “the EU decided to allow the supply of certain equipment to Syrian opposition forces.”

In the ensuing years the U.S. aided and abetted the supply of weapons (laundered through Jordan) to radical opposition groups while Turkey, Qatar and Saudi Arabia were the principal suppliers of weapons to ISIS.

As Meredith Tax of the think tank, Centre for Secular Space, recently pointed out in The Nation, the U.S. continues to turn a blind eye toward the actions of NATO-member Turkey which is supporting jihadi gains by attacking Kurdish forces in northern Syria. The media, as Tax correctly observes, has “failed to look hard at the Erdogan government’s support of jihadis, or to ask what they have in common.”

Meanwhile, diplomatic alternatives were never seriously pursued in Libya or in Syria – though it is true that the peaceful Russian alternative to Obama’s “red line” policy was pursued with regard to dismantling Syria’s stockpile of chemical weapons.

As the U.K. report tartly notes: “Political options were available if the UK Government had adhered to the spirit of Resolution 1973, implemented its original campaign plan and influenced its coalition allies to pause military action when Benghazi was secured in March 2011. Political engagement might have delivered civilian protection, regime change and reform at lesser cost to the UK and to Libya.”

And given the behavior of both Gaddafi and Assad in the years following 9/11 the sovereignty of both countries should have – at a minimum – been respected; after all, Gaddafi had only just begun to accede to Western prerogatives, as when he abandoned his WMD program in 2003, while Assad had cooperated with the Bush administration in its so-called Global War on Terror. It is worth noting that in doing so, he earned the enmity of the religious fanatics who run Turkey, Qatar and Saudi Arabia.

As thanks for his cooperation, the U.S., ever at the beck and call of the Gulf State autocracies who are our actual enemies, Assad has became the target of regime change enthusiasts in the U.S. and Europe. Their designs have wrecked large swathes of Syria, resulted in an unprecedented migrant crisis, destroyed the lives of many millions, gave rise to ISIS and strengthened the very same Islamist radicals who attacked us on 9/11 and who remain the sworn enemies of the West.

26 comments for “How Libyan ‘Regime Change’ Lies Echo in Syria”