Exclusive: Oliver Stone’s “Snowden” takes you inside the vast electronic expanse of U.S. intelligence gathering via the personal story of Edward Snowden’s decision to expose these secrets to the world, writes Lisa Pease.

If you think you already know the story of Edward Joseph Snowden, the man who leaked evidence of the global mass surveillance programs that the U.S. and U.K. governments have been conducting not just on enemies abroad but on their citizens at home, think again. Very few people know the complexities of the man and his backstory. 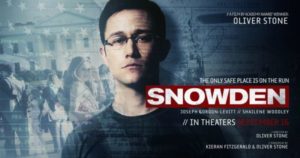 As Stone emphasized in person at a screening that I attended, the film is not a documentary and was decidedly fictionalized for dramatic effect. That said, many specifics and incidents are true — and Stone remained true to Snowden in terms of his intelligence, temperament and reasoning that helped shape the actions he took.

This riveting film — Stone’s latest foray into the dangers and excesses of the National Security State — has all the ingredients that we’ve come to expect from the frequent Academy Award winner and nominee. Stone’s touch is everywhere evident in the film.

The story that Stone and co-writer Kieran Fitzgerald weaves is compelling. The characters grow and evolve over the course of the film. The score is evocative. Shots are artfully crafted to make a rich movie-going experience. The visuals — and in one particular sequence, visualizations — are stunning.

Stone takes us along on Snowden’s personal journey of discovery in a film that is anchored by the love story between initially political opposites who grow, change and learn to make sacrifices to protect each other.

The film opens near the end of his story, with Snowden holed up in the Mira Hotel in Hong Kong, awaiting his first rendezvous with activist Laura Poitras and the lawyer-turned-journalist Glenn Greenwald. The film jumps back and forth in time from that “present” to Snowden’s past, which proceed in parallel throughout the film.

Snowden had originally tried to join the Special Forces, having been upset by the 9/11 tragedy that befell New York City and by proxy the rest of America. Due to an injury, Snowden turns to his interest in computers, and his technical prowess helps him rise quickly through the ranks of the CIA and brings him to the attention of the National Security Agency at the highest levels.

Like so many Americans, Snowden believed that what the secret elements of our government were doing were benign and necessary, due to the rise of terrorism. Snowden wanted to participate in covert operations and was given the opportunity. But when he realized that covert operations involved compromising people who had committed no crimes just so they could be forced to help the CIA, he had a change of heart and for a time left the agency.

And, the more Snowden learned from his work in America’s intelligence services, including the communications-spying NSA, the more he understood that with great power comes a great temptation to use it for evil as well as for good. Eventually, the weight of bearing the secrets he carried caused him to break some oaths in order to honor the higher calling of protecting the American people from unwarranted and unjustifiable surveillance.

In the film, at one point, Snowden gets upset when his girlfriend says so what if the government listens in — she had nothing to hide. But everyone has something to hide. That’s why you have a password on your computer, why your medical records aren’t made public, why your taxes stay between you and the IRS (unless, of course, you are running for president, in which case there is an expectation of greater transparency). 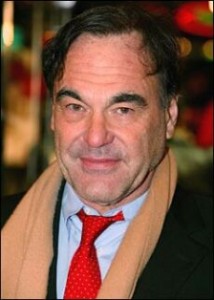 The film showed the toll that bearing difficult secrets took not only on Snowden’s life but on the lives of his friends. Snowden’s girlfriend at one point complained that he hadn’t touched her in months, a result of Snowden’s acute awareness of how every breath could be heard, every action seen or recorded unless extraordinary precautions were taken.

The real Edward Snowden, after noting how hard it was to watch himself portrayed in this scene to the world as the “worst boyfriend ever,” waxed eloquent on that subject during a live Q&A following a special screening of the film:

Stone’s film artfully weaves in a number of real-world examples of things people might wish to hide. No one will go to bed after viewing this without putting a piece of tape over their laptop camera, for instance, and I expect a surge in microwave sales among security professionals.

The actors do excellent jobs portraying the real-life characters we have come to know through news broadcasts and documentaries. Edward Snowden is played by Joseph Gordon-Levitt so well that at a screening in New York, the real Edward Snowden’s parents came up and thanked him for giving them the “essence” of their son.

I don’t know if actress Shailene Woodley did an accurate portrayal of Lindsay Mills, but the Bernie Sanders surrogate and anti-Dakota Access Pipeline activist was charming, smart, vulnerable and the perfect complement to the more serious, introverted Snowden, as played by Gordon-Levitt.

One of the things I hadn’t learned from the initial coverage of the real-life Snowden in the early media stories was how genius-level bright he is. That point is well made in the film and was equally evident in his articulate responses to the questions posed in the live Q&A session after the screening. The real Snowden made a powerful statement about privacy in his attempt to illuminate the crux of the issue with government spying:

I only wish Snowden had pointed out that one of the most terrible parts of government spying is how it provides blackmail material on those who would attempt to rein in the excesses of the National Security State. How can elected officials ever get the CIA or NSA to stop doing illegal things when the agencies hold all the darkest secrets of those same officials?

Longtime FBI Director J. Edgar Hoover rose to power in the previous century largely because he either knew or pretended to know the dirt on many politicians. Now, there is the prospect of U.S. intelligence insiders possessing extensive records of everyone’s electronic conversations and photographs, meaning that any misstep or personal foible becomes part of each person’s permanent record, available to an intelligence agency wanting to misuse it.

The implications of that troubling reality is one reason why this special film will stay with you, haunting you with its implications, long after you’ve left the darkness of the theater and returned to the privacy — or not — of your home. And if you want to know who the CIA’s assets are in the media, just pay attention to who gives this film a bad review. The CIA and NSA really do not want you to see it.

But let me give you one last reason to see “Snowden.” It belongs to an increasingly rare genre, a well-made film about a topic that matters. Over the years and decades, Hollywood has turned more and more to escapist movies with minimal attention to the great issues of the day. If we want to see more movies that are intelligent and relevant, we need to support films like this one.

22 comments for “The Value of Oliver Stone’s ‘Snowden’”