From Editor Robert Parry: Because I know people don’t liked to be nagged about money, Consortiumnews holds only three fundraisers a year, but it’s crucial that we make our goals so we can continue producing independent journalism all year.

Our work is especially important now that many of the mainstream U.S. news outlets have abandoned basic principles of honest journalism and have transformed themselves into little more than propaganda sheets pushing a new, costly and very dangerous Cold War.

We have set our late-summer/early-fall fundraising goal at $30,000. Please help us reach that target by making a donation by credit card online (we accept Visa, Mastercard, American Express and Discover), by using PayPal (our PayPal account is named after our original email address, “consortnew @ aol.com”), or by mailing a check to Consortium for Independent Journalism (CIJ); 2200 Wilson Blvd., Suite 102-231; Arlington VA 22201.

We are registered with PayPal’s Giving Fund under the name Consortium for Independent Journalism. And, since we are a 501-c-3 non-profit, donations by American taxpayers may be tax-deductible.

We also are offering a special thank-you gift for those who can give $125 or more – or if you set up a recurring monthly donation by credit card or PayPal.

You can receive a signed copy of the new edition of my second book, Trick or Treason, which was originally published in 1993 and has been long out of print. It tells the inside story of my PBS-Frontline investigation of the 1980 October Surprise mystery (whether Ronald Reagan and George H.W. Bush sabotaged President Carter’s Iran-hostage negotiations to ensure their electoral victory). There is also a new “Afterword” that brings the story up to the present day.

As part of the gift package, we also are including a DVD of the Frontline documentary, “Election Held Hostage,” the 1991 program that resulted from the investigation. 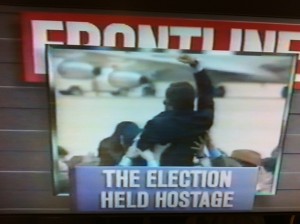 If you wish to get this book-and-DVD thank-you gift, just follow up your donation with an e-mail to us at info@consortiumnews.com with instructions on where to mail it. We’ll pay the shipping charges.

Another way to help is to buy a five-book set of my other books – Fooling America, Lost History, Secrecy & Privilege, Neck Deep and America’s Stolen Narrative – through the Web site at a deep discount price, with part of each purchase going to the fund drive.

Thanks for your support and for making our two decades-plus of honest journalism possible. Our work could not happen without your help.