On Aug. 17, TV interviewer Charlie Rose gave former acting CIA Director Michael Morell a “mulligan” for an earlier wayward drive on Aug. 8 that sliced deep into the rough and even stirred up some nonviolent animals by advocating the murder of Russians and Iranians. But, alas, Morell duffed the second drive, too.

Morell did so despite Rose’s efforts to tee up the questions as favorably as possible, trying to help Morell explain what he meant about “killing” Russians and Iranians in Syria and bombing Syrian President Bashar al-Assad into submission.

Rose: “We make them pay the price by killing Russians?”

Morell: “Yes … You don’t tell the world about it. … But you make sure they know it in Moscow and Tehran.”

In the follow-up interview, some of Rose’s fretful comments made it clear that there are still some American non-neocons around who were withholding applause for Morell’s belligerent suggestion.

Rose apparently has some viewers who oppose all terrorism, including the state-sponsored variety that would involve a few assassinations to send a message, and the notion that U.S. bombing Syria to “scare” Assad is somehow okay (as long as the perpetrator is the sole “indispensable” nation in the world).

Rose helped Morell ‘splain that he really did not want to have U.S. Special Forces kill Russians and Iranians. No, he would be satisfied if the U.S.-sponsored “moderate opposition” in Syria did that particular killing. But Morell would not back away from his advocacy of the U.S. Air Force bombing Syrian government targets. That would be “an okay thing” in Morell’s lexicon.

The FBI defines terrorism as “the unlawful use of force or violence against persons or property to intimidate or coerce a government, the civilian population, or any segment thereof, in furtherance of political or social objectives.” That would seem to cover Morell’s plan.

But Morell seems oblivious to international law and to the vast human suffering already inflicted in Syria over the past five years by government forces, rebels, terrorists and outside nations trying to advance one geopolitical goal or another.

What is needed is a serious commitment to peace talks without unacceptable preconditions, such as outside demands for “regime change.” Instead, the focus should be on creating conditions for Syrians to make that choice themselves through elections or power-sharing negotiations.

Morell prefers to think that a few more U.S.-directed murders and some more aerial-inflicted mayhem should do the trick. Perhaps he thinks that’s the sort of tough-guy/gal talk that will impress a prospective President Hillary Clinton.

Charlie Rose begins the “mulligan” segment with the suggestion that Morell might have slightly misspoken: “Tell me what you wanted to say so we understand it … Tell me what you meant to say … perhaps you did not speak as precisely as you should have or I didn’t ask the right questions.” 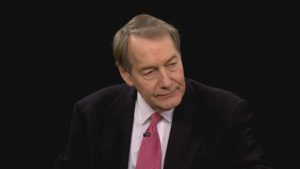 Morell responded, “No, no, Charlie, you always ask the right questions,” and then he presented his killing plan as a route to peace, albeit one in which the United States dictates “regime change” in Syria: “So there’s not a military solution to this, there is only a political solution. … And that political solution is, in my view, a transition of power from Assad to a, a, a transitional government that represents all of the Syrian people.

Rose: “You weren’t suggesting that the United States should do that, but the moderate forces on the ground.”

Morell: “And I think I came across as saying U.S. Special Forces should go in there and start killing Iranians and Russians. I did not say that. …

“So that’s Russia and Iran. Now, Assad. How do you put some pressure on Assad, right? And here I did argue, Charlie, that the U.S. military itself should take some action, and what I would see as valuable is limited, very, very, very limited U.S. airstrikes against those assets that are extremely important to Assad personally. So, in the middle of the night you destroy one of his offices; you don’t kill anybody, right, zero collateral. … You do this with the same rules of engagement we use against terrorists. … (Emphasis added)

“Now these issues that I’m talking about here, right, are talked about in the sit room. They’re talked about in national security circles all the time, right. These are debates that people have, and I certainly understand that there are people on the other side of the argument from me, right. But I wasn’t talking about the U.S. starting a major war with Iran and Russia, and I think that was the way people interpreted it.”

Not to put too fine a point on this, but everything that Morell is advocating here violates international law, the rules that – in other circumstances, i.e. when another government is involved – the U.S. government condemns as “aggression” or as an “invasion” or as “terrorism.”

Remember, after the U.S.-backed coup in Ukraine in February 2014, when Russia intervened to allow Crimea to hold a referendum on splitting away from the new regime in Kiev and rejoining Russia, the U.S. government insisted that there was no excuse for President Vladimir Putin not respecting the sovereignty of the coup regime even if it had illegally ousted an elected president.

However, regarding Syria, the United States and its various “allies,” including Saudi Arabia, Turkey and Israel, have intervened directly and indirectly in supporting various armed groups, including Al Qaeda’s Nusra Front, seeking the violent overthrow of Syria’s government.

Without any legal authorization from the United Nations, President Barack Obama has ordered the arming and training of anti-government rebels (including some who have fought under Nusra’s command structure), has carried out airstrikes inside Syria (aimed at Islamic State militants), and has deployed U.S. Special Forces inside Syria with Kurdish rebels.

Now, a former senior U.S. intelligence official is publicly urging bombing of Syrian government targets and the killing of Iranians and Russians who are legally inside Syria at the invitation of the internationally recognized government. In other words, not only does the U.S. government operate with breathtaking hypocrisy in the Syrian crisis, but it functions completely outside international law.

And, Morell says that in attacking Syrian government targets — supposedly without causing any deaths — the United States would employ “the same rules of engagement we use against terrorists,” except those rules of engagement explicitly seek to kill targeted individuals. So, what kind of dangerously muddled thinking do we have here?

One can only imagine the reaction if some Russian version of Morell went on Moscow TV and urged the murder of U.S. military trainers operating inside Ukraine – to send a message to Washington. And then, the Russian Morell would advocate Russia bombing Ukrainian government targets in Kiev with the supposed goal of forcing the U.S.-backed government to accept a “regime change” acceptable to Moscow.

Rather than calls for him to be locked up or at least decisively repudiated, the American Morell was allowed to continue his fawning audition for a possible job in a Hillary Clinton administration by extolling her trustworthiness and “humanity.”

Morell offered a heartwarming story about how compassionate Clinton was as Secretary of State when he lost out to John Brennan to be the fulltime CIA Director. After he was un-picked for the job, Morell said he was in the White House Situation Room and Clinton, “sat down next to me, put her hand on my shoulder, and she simply said, ‘Are you okay?’ There is humanity there, and I think the public needs to know.”

And, Clinton was a straight-shooter, too, Morell explained: “You know, it’s interesting, Charlie, I worked with her for four years. Leon Panetta, David Petraeus worked with her for four years. We trusted her word; we trusted her judgment. You know, [CIA] Director Panetta, [CIA] Director Petraeus, I provided her with some of the most sensitive information that the CIA collects and she never gave us one reason to doubt how she was handling that. You know, she spoke to us forthrightly. … I trust her word and I trust her judgment.”

Can Morell be unaware that Clinton repeatedly put highly sensitive intelligence on her very vulnerable private email server along with other data that later investigations determined should have been marked SECRET, TOP SECRET, CODEWORD, and/or SPECIAL ACCESS PROGRAMS?

FBI Director James Comey, in announcing that he would not recommend prosecuting Clinton for compromising these secrets, called her behavior “extremely careless.”

For his part, Charlie Rose offered a lament about how hard it is for Clinton to convey her “humanity” and how deserving she is of trust. He riffed on the Biblical passage about those who can be trusted in small matters (like sitting down next to Morell, putting her hand on his shoulder, and asking him if he is okay) can be trusted on big matters, too.

My Travails With Charlie

Twelve years ago, I was interviewed by Charlie Rose, with the other interviewee (who participated remotely) James Woolsey, former head of the CIA (1993-95), arch-neocon, and self-described “anchor the Presbyterian wing of JINSA” (the Jewish Institute for National Security Affairs).

The occasion was the New York premier of Robert Greenwald’s full-length film version of his documentary, “Uncovered: the Whole Truth About the Iraq War,” in which I had a small part and which described the many falsehoods that had been used by President George W. Bush and his neocon advisers, to justify invading Iraq. Woolsey did not like the film, and Greenwald asked me to take the Rose invitation that had originally been extended to him.

True to form, Charlie Rose knew on which side his bread was buttered, and it wasn’t mine. He was his usual solicitous self when dealing with an “important” personage, such as Woolsey. I was going to count the minutes apportioned to me and compare them with those given to Woolsey, but I decided to spare myself the trouble.

The last time I checked the Aug. 20, 2004 video is available for purchase but I refuse to pay for it. Fortunately, a friend taped and uploaded the audio onto YouTube. It might be worth a listen on a slow summer day 12 years after my travails with Charlie.

Ray McGovern works with Tell the Word, a publishing arm of the ecumenical Church of the Saviour in inner-city Washington. He was a CIA analyst from 1963 to 1990 and is now on the Steering Group of Veteran Intelligence Professionals for Sanity (VIPS).

52 comments for “A Lawless Plan to Target Syria’s Allies”