One of the more pertinent observations about Donald Trump’s comment this week on what gun owners could do about a Hillary Clinton presidency comes from columnist Thomas Friedman, who recalls the assassination in Israel 21 years ago of prime minister Yitzhak Rabin. The assassination was preceded by a stream of hateful invective with violent overtones directed by elements on the Israeli right against Rabin — for his having taken a step, in the form of the Oslo accords, toward making peace with the Palestinians.

The invective was condoned rather than condemned by prominent political leaders on the right, including current Prime Minister Benjamin Netanyahu. The inflammatory rhetoric and its widespread toleration helped to convince the assassin that his lethal act would be not only widely accepted but even legitimate. This whole tragic and abominable story is told in detail in Dan Ephron’s gripping book Killing a King, which I reviewed for The National Interest. 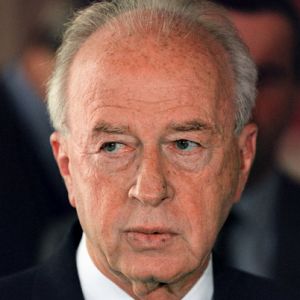 Israeli Prime Minister Yitzhak Rabin, who was assassinated in 1995.

The process that took place then in Israel and that Trump’s remark about the Second Amendment increases the risk of taking place in the United States is related to one of his slightly earlier comments: the one about how if he loses in November it will be because the election was “rigged.”

The implied consequences in this instance may be somewhat different from those associated with the comment about guns but the underlying dynamic is basically the same: the inculcating in large parts of the population of the idea that other parts of the population or other leaders are less than legitimate. This in turn bestows a sense of legitimacy on extra-constitutional or even violent actions directed against the despised leaders or sub-populations.

Assassination of a leader is one of the most shocking forms that such action can take. In Israel it took that form with the murder of Rabin. Here in the United States we can hope that the Secret Service is on the case and can prevent a comparable crime.

Violence not against an individual leader but instead against ordinary members of a sub-population is another form such invective-stimulated action can take. Here the Trump rhetoric to worry about is his stream of comments about Muslims and Mexicans. And once again Israel provides an example of the sorts of things that can happen. With even leaders such as the Israeli minister of justice dispensing rhetoric bound to intensify hatred of Palestinian Arabs, the unsurprising result is anti-Arab violence, both official and unofficial, that is so routine and so broadly tolerated that the great majority of it doesn’t even make the news.

Mostly it is the stuff of specialized reporting by human rights organizations. It usually is only when an incident happens to be captured on video that the rest of us view directly the consequences of an entire subjugated population being viewed as illegitimate — as even having less of a right to live than those in the dominant population.

Israel is a disturbing demonstration of how far violent intolerance involving ethnic and religious prejudice can go. Americans should be vigilant regarding any signs of anything like this happening in the United States.

The phenomenon of antagonistic attitudes held by the many lending legitimacy to extreme actions committed by the few can be found elsewhere. It is a factor in anti-U.S. international terrorism. The vast majority of people having anti-U.S. views, even strong ones, do not become terrorists. But they constitute a population from which terrorists emerge.

More to the present point, they provide attitudinal support, wittingly or not, to anti-U.S. terrorists and help to convince the latter that they are acting nobly on behalf of a cause much larger than themselves. All this is why it is a mistake to focus narrowly on those who have already crossed the line into terrorism. It is just as important a part of counterterrorism to pay attention to the attitudes of the larger populations that form the terrorists’ constituency, and to whatever policies and actions of the United States affect those attitudes.