Exclusive: The U.S. foreign policy establishment cloaks its desire for global dominance in the language of humanitarianism and “democracy promotion” even when the policies lead to death and chaos, as James W Carden describes.

Despite America’s myriad problems domestically and internationally, its geo-strategic position remains the envy of the world. Protected in the east by the Atlantic, in the west by the Pacific, to the north by Canada and to the south by Mexico, the United States is, for all intents and purposes, impervious to a foreign invasion.

Its advanced and mobile nuclear arsenal and conventional force projection capabilities further serve as a deterrent against attacks from rival nation-states. The country’s strategic position is enhanced, too, by what Valéry Giscard d’Estaing has referred to as the “exorbitant privilege” – that of possessing the world’s reserve currency. As such, the U.S. does not face the same restraints on spending that other nations do. 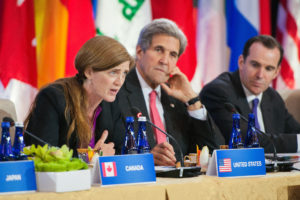 U.S. Ambassador to the United Nations Samantha Power with U.S. Secretary of State John Kerry delivering remarks at the Pledging Conference in Support of Iraq at the U.S. Department of State in Washington, D.C. on July 20, 2016. [State Department Photo/ Public Domain]

Yet since the end of the Cold War, the foreign policy establishment and three successive administrations have committed the U.S. to a dangerous and ill-conceived pursuit of global military and economic hegemony which has only served to undercut the country’s economy and security. It is a pursuit that is frequently cloaked in the rhetoric of humanitarianism and “democracy promotion.”

United Nations Ambassador Samantha Power recently declared in the pages of the New York Review of Books that it is “our self-interest that requires us to get better at improving human security in the service of national security.”

Power – like nearly all members of the foreign policy establishment today – believes (or says she believes) that the way foreign governments treat their own citizens “matters because it can have a direct impact on international peace and security – and on our respective national interests.”

To bolster her argument she takes the example of the Russian government which, she claims, habitually lies to its own people about what it is really up to in Ukraine. “The elimination of critical voices inside Russia,” writes Power, “helps enable acts that are profoundly destabilizing outside of Russia.”

Power’s claims are part of the widely shared, bipartisan consensus among the post-Cold War foreign policy elites who believe that the problem is not that the United States has intervened around the world too much and too often but rather that it has intervened too little. In Power’s view, “we must never be ashamed to ask whether we have been too reticent in pressing certain governments to reform and to respond to the demands of their citizens.”

This last point is a curious claim that, I suspect, quite intentionally skirts the question of whether the U.S., by actively pushing its “pro-democracy” agenda abroad, is itself the instigator of many of those “demands” (by financing and organizing many of the groups clamoring for U.S. intervention).

Efforts – almost too numerous to count – by USAID, the International Republican Institute and the National Endowment for Democracy, often in conjunction with various think tanks, TOR developers (software that enables anonymous communications), and George Soros-funded Open Society Institutes – have sought to materially aid a plethora of  opposition groups across the globe. (They, in turn, seek more U.S. intervention to enhance their political positions within their societies.)

A screen shot of U.S. Assistant Secretary of State for European Affairs Victoria Nuland speaking to U.S. and Ukrainian business leaders on Dec. 13, 2013, at an event sponsored by Chevron, with its logo to Nuland’s left.

Contrary to what the scholar, diplomat George Kennan urged – that diplomacy, properly executed, was necessarily a government-to-government interaction – Power believes that “we need to broaden the spectrum of whom we engage with our diplomacy.”

She writes that diplomats must court “civil society organizations” and other groups such as “teachers association, workers’ unions and leaders in the business community” – never mind the very plain fact that State Department diplomats and Commerce Department officials, among others, have been doing outreach of that sort for some time.

The results of all this U.S. meddling have been little short of disastrous. Take, for instance, the failed state of Ukraine, where USAID and other U.S. institutions spent $5 billion in the quarter century since the fall of the Soviet Union, according to Assistant Secretary of State for European Affairs Victoria Nuland (and that was before the U.S.-backed overthrow of the elected government in February 2014 and the current civil war which has claimed the lives of some 10,000 Ukrainians).

This generation of American “humanitarian” crusaders, as exemplified by the career of Ambassador Power, continually seeks to sacrifice stability on the altar of “democratic” idealism (even when that involves reversing democratic results and contributing to humanitarian suffering). Further, the problem that these efforts engender for U.S. national security interests are legion: war continues to rage in eastern Ukraine, Libya is completely destabilized, likewise Syria and Iraq.

Contrary to what Power would have us believe, the “democratization” crusade undermines, rather than strengthens U.S. national security. As the Greek statesman Pericles famously observed: “I am more afraid of our own mistakes than of our enemies’ designs.”