Britain’s Chilcot report recalled the Iraq War lies that justified an aggressive war that claimed hundreds of thousands of lives, but this international crime has largely been sloughed off with almost no accountability, as Eric S. Margolis noted.

Last week’s Chilcot report on Britain’s role in the 2003 invasion of Iraq was as polite and guarded as a proper English tea party. No direct accusations, no talk of war crimes by then Prime Minister Tony Blair or his guiding light, President George W. Bush. But still pretty damning.

Such government reports and commissions, as was wittily noted in the delightful program “Yes, Prime Minister,” are designed to obscure rather than reveal the truth and bury awkward facts in mountains of paper. And beneath mountains of lies. 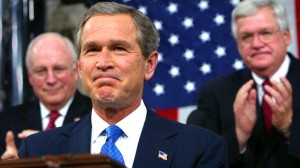 President George W. Bush receiving applause during his 2003 State of the Union Address in which he laid out a fraudulent case for invading Iraq.

The biggest lie on both sides of the Atlantic was that the invasion and destruction of Iraq was the result of “faulty intelligence.” The Bush and Blair camps and the U.S. and British media keep pushing this absurd line.

This writer, who had covered Iraq since 1976, was one of the first to assert that Baghdad had no so-called weapons of mass destruction, and no means of delivering them even if it did. For this I was dropped and black-listed by the leading U.S. TV cable news network and leading U.S. newspapers.

I had no love for the brutal Saddam Hussein, whose secret police threatened to hang me as a spy. But I could not abide the intense war propaganda coming from Washington and London, served up by the servile, mendacious U.S. and British media. The planned invasion of Iraq was not about nuclear weapons or democracy, as Bush claimed.

Two powerful factions in Washington were beating the war drums: ardently pro-Israel neoconservatives who yearned to see an enemy of Israel destroyed, and a cabal of conservative oil men and imperialists around Vice President Dick Cheney who sought to grab Iraq’s huge oil reserves at a time they believed oil was running out. They engineered the Iraq War, as blatant and illegal an aggression as Hitler’s invasion of Poland in 1939.

Britain’s smarmy Tony Blair tagged along with the war boosters in hopes that the U.K. could pick up the crumbs from the invasion and reassert its former economic and political power in the Arab world. Blair had long been a favorite of British neoconservatives. The silver-tongued Blair became point man for the war in preference to the tongue-twisted, stumbling George Bush. But the real warlord was VP Dick Cheney.

There was no “flawed intelligence.” There were intelligence agencies bullied into reporting a fake narrative to suit their political masters. And a lot of fake reports concocted by our Mideast allies like Israel and Kuwait.

After the even mild Chilcot report, Blair’s reputation is in tatters, as it should be. How such an intelligent, worldly man could have allowed himself to be led around by the doltish, swaggering Bush is hard to fathom.

Europe’s leaders and Canada refused to join the Anglo-American aggression. France, which warned Bush of the disaster he would inflict, was slandered and smeared by U.S. Republicans as “cheese-eating surrender monkeys.” In the event, the real monkeys were the Bush and Blair governments.

Saddam Hussain, a former U.S. ally, was deposed and lynched. Iraq, the most advanced Arab nation, was almost totally destroyed. Up to one million Iraqis may have been killed, though the Chilcot report claimed only a risible 150,000.

As Saddam had predicted, the Bush-Blair invasion opened the gates of hell, and out came Al Qaeda and then ISIS. The U.S. and British media, supposedly the bulwark of democracy, rolled over and  became an organ of government war propaganda. Blair had the august BBC purged for failing to fully support his drive for war. BBC has never recovered.

Interestingly, last week’s news of the Chilcot investigation was buried deep inside The New York Times on Thursday. The Times was a key partisan of the war. So too the Wall Street Journal, Fox News, and the big TV networks. Without their shameful connivance, the Iraq War might not have happened.

Bush and Blair have the deaths of nearly 4,500 U.S. soldiers on their heads, the devastation of Iraq, our $1 trillion war, the ever-expanding mess in the Mideast, and the violence what we wrongly blame on  “terrorism” and so-called “radical Islam.”

The men and women responsible for this biggest disaster in our era should be brought to account. As long as Bush and Blair swan around and collect speaking fees, we have no right to lecture other nations, including Russia and China, on how to run a democracy or rule of law.  Bush and Blair should be facing trial for war crime at the Hague Court.

Eric S. Margolis was a contributing editor to the Toronto Sun chain of newspapers, writing mainly about the Middle East, South Asia and Islam. He contributes to the Huffington Post and appears frequently on Canadian television broadcasts. Copyright Eric S. Margolis 2016. [Re-posted with the author’s permission.]