From the Archive: New police shooting deaths of two black men – in Louisiana and Minnesota – show the kind of violent blowback that America is facing after decades of imperial warfare abroad, as ex-CIA analyst Ray McGovern wrote in 2015.

Brutality thrives in American police treatment of common citizens reflecting an ethos of violence that has flourished over the past dozen years with almost no one in authority held accountable. Much of this behavior can be traced back to U.S. wars of choice and it is not as though we were not warned of the inevitable blowback.

On Feb. 26, 2003, three weeks before the U.S./UK attack on Iraq, Coleen Rowley, then division counsel and special agent at the FBI office in Minneapolis, had the prescience and the guts to send a letter to then FBI Director Robert Mueller.  The New York Times published it a week later.

Rowley warned Mueller that launching unjustified war would prove counterproductive in various ways. One blowback she highlighted was that the rationale being applied to allow preemptive strikes abroad could migrate back home, “fostering a more permissive attitude toward shootings by law enforcement officers in this country.” Tragically, the recent spate of murders by police has proved Rowley right.

And not only killing. Police brutality toward the citizenry, some of it by former soldiers who themselves were brutalized by war, has soared. Yet, the dark side of what was done by U.S. troops abroad as well as the damage that was done to their psyches and sense of morality is rarely shown in the U.S. mainstream media, which prefers to veer between romanticizing the adventure of war and lamenting the physical harm done to America’s maimed warriors.

One has to go to foreign media for real-life examples of the brutalization of, as well as by, the young soldiers we send off to battle. (See, for example, this segment from Germany’s “60 Minutes”-type TV program, Panorama.)

The glib, implicit approval of violence (embedded, for instance, in the customary “Thank you for your service”) simply adds to the widespread acceptance of brutality as somehow okay.

Cases of police beating citizens who are detained or taken into custody have multiplied, with police offenders frequently held to the same unconscionable let’s-not-look-back “accountability” that has let George W. Bush and Dick Cheney walk free so far for launching the “war of aggression” on Iraq. 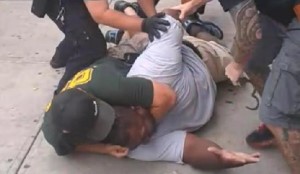 Eric Garner being put in a chokehold by New York City police shortly before his death.

The post-World War II Nuremberg Tribunal carefully defined such a war as “the supreme international crime, differing from other war crimes only in that it contains within itself the accumulated evil of the whole.” Accumulated evil? Having just emerged from the nightmare of world conflagration, the jurists on the Tribunal understood that it was the unleashing of the dogs of war launching an aggressive war that also loosed all the other atrocities and barbarities associated with warfare.

Looking back on the last decade, think of crimes like kidnapping, black (or secret) prisons and torture as well as the slaughter of so many civilians as the Bush/Cheney war of choice has spread violence and death now in the form of the brutal Islamic State and America’s endless “drone wars” across almost the entire Middle East.

But part of that accumulated evil is also playing out at home on the streets of American cities and in even in our deserts. On April 9, 2015, San Bernardino’s “sheriff’s deputies” were caught on video viciously brutalizing a man who had already prostrated himself on the desert floor with his hands behind his back.

Warning: Watching this video may make you ill or cry. If so, take heart. For this would merely show that, because you still have a conscience, you are sickened by what you see, and that you can still “cry our beloved country.”

Conscience is a good thing, for it often brings the courage to speak out and confront the banality of evil that always flows and inevitably blows back from wars of aggression. Indifference to human suffering is another one of those accumulated evils of the whole.

We need to summon the kind of courage Coleen Rowley showed three weeks before the United States launched the “supreme international crime.” We need to monitor closely what happens after the unconscionable abuse by police of the helpless man in San Bernardino, after the recent police shootings of unarmed black men, and after the excessive brutality that America’s over-militarized police now regularly inflict on citizens during routine arrests.

“If you see something, say something” we are constantly told. If we see this video coverage, watch this sort of brutality, and do nothing, I fear for what will become of our country.

Ray McGovern works with Tell the Word, a publishing arm of the ecumenical Church of the Saviour in inner-city Washington.  He served as an infantry/intelligence officer, and then as a CIA analyst for a total of 30 years.

13 comments for “The Nasty Blowback from America’s Wars”