The Islamic State “spared” some ancient ruins at Palmyra as part of a trap to blow up the antiquities after their liberation, scheming to kill hundreds of Syrian army troops and “erase” the treasures for all time, reports Franklin Lamb.

Something just didn’t feel quite right to Syrian army brass as they penciled in final plans to liberate the ancient city of Palmyra in early March 2016. They debated how best to drive the Islamic State (also known as ISIS, ISIL or Daesh) out of the city and into the surrounding unwelcoming desert. But some generals were puzzled.

“Why did Daesh not do even more damage at the ancient ruins, given their widely broadcast iconoclasm and their targeting as heresy ancient pre-Islamic sites,” one officer remembered asking his colleagues. The jihadists certainly had the means and a perverted Koranic motivation to destroy the whole area of ancient ruins but left much of it intact. 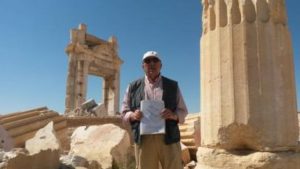 A tour guide in front of the ruins of the Temple of Baal blown up by the Islamic State. He’s holding a drawing of the temple as it used to appear.

This puzzlement was widely held by Syrian officials and military strategists who increasingly wondered what was really going on as it became evident that the Islamic State’s military positions at Palmyra were untenable and ISIS forces faced certain defeat.

The drama of the Islamic State’s occupation of some of the world’s most valuable antiquities had begun eight months earlier. ISIS forces reached Palmyra on May 20, 2015, and in the following days, most of the local population fled by any means available. Many evacuated with the Syrian army as Syria’s Directorate-General of Antiquities and Museums (DGAM) removed as many of Palmyra’s treasures as possible.

Led by Dr. Maamoun Abdul Karim – affectionately known as “Dr. Maamoun” in Syria – the DGAM’s staff worked indefatigably to preserve and protect as much of Palmyra’s cultural heritage as possible. Together with the Syrian army and local residents, the DGAM’s staff was able to protect more than 80 percent of the exhibits at Palmyra’s museum, including transporting a large truck full of antiquities at great personal risk less than 24 hours before ISIS invaded and surrounded the city.

Among the 500 or so people left behind in Palmyra, some did their best to stop ISIS’s destruction of the treasures. On Aug. 18, 2015, after refusing – even under torture – to give ISIS information about the location of certain artifacts, Khaled Ass’ad, the former Director of Palmyra Antiquities and Museums, was accused of being an “apostate” and was brutally murdered near the Palmyra museum where he had labored for decades.

ISIS committed massive cultural heritage crimes, including damage to the Arc de Triumph, Temple of Bel, and Sella (the central part of the temple where the statue of the God Bel was located). Besides destroying historic sites, the Islamic State gloried in other atrocities. At Palmyra’s historic amphitheater, 22 Syrian soldiers were hanged – one each from the massive Roman-era columns.

A Russian orchestra performing at Palmyra’s Roman theater on May 5, 2016, after Syrian troops, backed by Russian air power, reclaimed the ancient city from the Islamic State. (Image from RT’s live-streaming of the event.)

Yet, partly because of the heroic acts by protectors of the antiquities, the Islamic State’s damage to Palmyra’s archeological sites was more limited than widely believed. Contrary to many media reports, only five percent of the cultural heritage area was damaged by ISIS.

But why? That was the mystery that Syrian generals pondered as they closed in on Islamic State positions in and around Palmyra.

Clearly, the Islamic State saw advantages in leaving many of the ruins in place, knowing that they provided a degree of safety for key personnel since the Syrian military and its Russian allies were loath to destroy the treasures.

At Palmyra’s National Museum, Syria’s second most visited collection of antiquities after the National Museum in Damascus, ISIS members methodically chiseled off the faces and hands of each of the museum’s 74 statue heads, including those in what is called the “Head Room,” but didn’t destroy the museum in total.

Instead, ISIS housed key leaders, its Sharia court and ISIS records among the remaining statues inside Palmyra’s museum, realizing that they would be fairly safe astride the “Bride of the Desert.”

The Islamic State’s calculation about Syria’s hesitancy to inflict more damage was correct. Before waging the final assault to re-take Palmyra, the government of Bashar al-Assad ordered the army not to shell near the ruins. The Syrian air force was similarly instructed not to bomb the close-in area.

So, the army – at the cost of losing the lives of more soldiers – did not attack from the south into the area of the ancient ruins. Rather the army surrounded the whole area and fought close-in street battles, mainly in the “modern” city area. “Tadmur, (Palmyra) was taken piece by piece to avoid damaging the ruins,” one officer told me.

Despite recognizing how the Islamic State saw the ruins as a relatively safe zone – which was one explanation for why more of the antiquities weren’t destroyed – Syrian military officers were still uncomfortable.

“We felt something was wrong with this picture,” one expert who has worked at Palmyra for the past two decades explained. “Did Daesh (ISIS) explode certain sites mainly for publicity and was it not interested to cause more lasting destruction and erase the surrounding area?”

After razing the Arc de Triumph, Temple of Bel and Sella, ISIS did not inflict further damage or remove the chunks of the blown-up columns and structures. The pieces were left at the base of the structure and ISIS must have been aware that despite the iconoclastic destructions, the columns and structures could be put back together.

As the fight for Palmyra reached its conclusion, Syrian army intelligence admitted that it did not have many agents among the remaining population, which was tightly controlled by ISIS. But army intelligence did receive some reports about seemingly odd middle of the night activity among the ruins. The activity, local sources claimed, increased toward the end of the eight-month ISIS occupation.

The local rumors about nocturnal activities turned out to be accurate. ISIS had developed an elaborate plan to plant explosives among the ruins and detonate the bombs after Syrian troops had reclaimed the ruins, as I learned from interviews, piecing together various comments.

ISIS laid what seemed like a few miles of wires directly connecting virtually every column and structure of ancient Palmyra to massive amounts of buried explosives that included more than 4,000 bombs among the ruins and another 1,000-plus in the town of Palmyra.

Using sophisticated technology and triggering devices, ISIS intended to “erase” the whole area in a massive explosion. Indeed, the ISIS plan, which was apparently referenced in a document later recovered from the museum, was dubbed “Erase.” (“Mahaqa” in Arabic). ISIS planned to “Erase” the whole area of ancient ruins and hoped to kill at least 1,000 Syrian troops.

A Russian orchestra performs a concert at Palmyra’s ancient Roman theater on May 5, 2016, after Syrian troops, backed by Russian air power, reclaimed the ancient city from the Islamic State. (Image from RT’s live-streaming of the event)

Syrian army intelligence discovered the plan just a couple of days before the army was to enter the area of the ruins in force. One archeologist who has worked for many years at Palmyra said the scheme involved some of the latest American technology, but another source told me there was nothing used by ISIS that the Syrian and Russian ordnance disposal specialists were unfamiliar with. Still, the breadth and detail of the wiring and explosives that ISIS placed hidden among the ruins were found to be very sophisticated.

Syrian and Russian experts discovered that ISIS planned to trigger “Erase” by employing one of two means. Plan A was to detonate the massive explosions by using a mobile phone from as far away as between 5 and 10 kilometers. A backup Plan B to trigger the explosion was tied to landline phone lines.

Arriving Syrian forces acted fast. The first measure they took was to have the two Syrian phone services Syriatel and MTN shut down all the phone lines in and around Palmyra. “Erase” was disabled. If ISIS had a Plan C, it did not work either.

The dangerous and tedious unexploded-ordnance-disposal work began in earnest on March 29, 2016, and continued until April 30. The teams of demolition experts were other unsung heroes of Palmyra’s liberation, including 100 Syrian and 200 Russian unexploded-ordnance specialists and 11 Russian explosive-detecting dogs. Some robots were also deployed as part of the massive around-the-clock bomb-clearing operation.

During the 30 days, two soldiers were killed and others were wounded. No fewer than 4,000 booby-trap bombs were defused and removed from among the world’s cultural heritage ruins at ancient Palmyra.

A week later, on May 5, a Russian symphony performed in Palmyra’s famed amphitheater. Still visible atop one column was a rope used to hang one of the 22 Syrian soldiers. The next day, May 6, Syria used the same site to celebrate Martyr’s Day.

Since the city’s liberation, experts have formed three units specializing in engineering, archeological evaluations and restoration of damaged artifacts. It is now believed that 95 percent of Daesh’s damage can and will be restored. Some archeologists believe the percentage of restoration may be even higher.

Russian President Vladimir Putin addressing the audience at a concert for Palmyra via a satellite link on May 5, 2016. (Image from RT’s live-streaming of the event)

According to one participant, visiting UNESCO officials from Paris recently engaged in very useful discussions of two often misunderstood concepts, restoration vis a vis rebuilding. Syria plans restoration at Palmyra, using the original matrix fragments, not rebuilding which suggests using materials from elsewhere. UNESCO agrees with DGAM and has promised major help once security conditions allow. So have many others internationally.

Why such optimism? Is it misplaced? Experts in Syria think not. At virtually all the sites that ISIS did destroy, the large pieces of the fallen structures are on the ground. And they can be restored to their original position.

One Japanese scholar from Osaka University said that by employing recently developed technology, similar in some respects to what Japanese experts used to “look inside” Egyptian pyramids a few years back, the 325 pieces in a pile of rubble from one ISIS-destroyed arch can be put back exactly in place.

According to the Syrian general who commanded the neutralization of the ISIS “Erase” project (and who generously gave me hours of his and his staff’s time), Palmyra and the close-in surrounding area are now cleansed of bobby-traps and are safe. The general proclaimed that Palmyra and its cultural heritage sites are ready to again receive foreign visitors.

Franklin Lamb is doing research in Syria and Lebanon and volunteers with the MSRCL and the Sabra-Shatila Scholarship Program. His latest book, Syria’s Endangered Heritage is available on Amazon/Kindle. He is reachable c/o fplamb@gmail.com

8 comments for “How ISIS’s Palmyra ‘Erase’ Trap Was Foiled”