Neocon domination of the U.S. foreign policy establishment has foreclosed serious debate over Israel’s strangling control of Palestinian water resources and what that means for the future of that ghetto-ized population, as Chuck Spinney explains.

Access to water is one of the most fundamental and least discussed issues underpinning the Israeli – Palestinian conflict (as well as the recurring pattern of Israel’s conflicts with Syria and Lebanon). Control of the West Bank’s water resources is intimately tied into the growing pattern of the Israeli settlements in the West Bank and, if left unchecked, Israel’s inevitable annexation of Area C (60 percent) of the West Bank (thereby formalizing the Gazification of Areas A & B). Water resources are also intimately woven into pattern of destruction in Israel’s siege of the Gaza ghetto.

Most Americans remain unaware of water’s central importance in this conflict. Yet a fair and equitable solution to this issue is a necessary albeit not sufficient condition for ending the Israeli-Palestinian conflict on terms that do not sow the seeds for future conflict.

Graffiti on the Palestinian side of Israel’s “separation wall” recalls the words of John F. Kennedy in decrying the Berlin Wall with the words in German, “I am a Berliner.” (Photo credit: Marc Venezia)

The parameters of the water question in the Jordan River Valley have been long understood, if ignored, by American policy makers (see the 1955 Johnston Plan and the Johnston Plan Revisited).  Indeed, in its current context, these parameters reach back to the Feb. 3, 1919 Zionist proposal to the Versailles Peace Conference for a Jewish national home (do a word search for “water” and think about the implications of the highlighted text).

More generally, the history of access to water in this region reaches back to the dawn of civilization and the creation of agriculture. The Jordan River drainage system (along with Lebanon’s surface water systems) together with the aquifers in the highlands of the West Bank (and Lebanon) connect the two wings of the Fertile Crescent stretching from the Nile River system in the West to Tigris and Euphrates River systems in the East.

It is no accident that the location of one of the world’s oldest cities, the Palestinian canton of Jericho, was determined in large part by its access to the wells and springs in the center of this link.

I first became interested in this issue in 2001 (and did a subsequent, more extensive analysis in 2003 here). Since 2001, the water question has worsened with each passing year, yet it still receives almost no attention in the mainstream media.

The attached analysis by Camilla Corradin in Aljazeera is an excellent update of this steadily worsening question. The links in her report are particularly important sources of information. I urge readers to read the links as well as her essay.

Chuck Spinney is a former military analyst for the Pentagon who was famous for the “Spinney Report,” which criticized the Pentagon’s wasteful pursuit of costly and complex weapons systems.

Israel: Water as a tool to dominate Palestinians

Israel deliberately denies Palestinians control over their water sources and sets the ground for water domination.

Occupied West Bank – As temperatures rise and summer months approach, yet again this year, thousands of Palestinians in the occupied West Bank are being deprived of their most basic need – access to water – as the Israeli national water company Mekorot restricted the water supply to villages and towns in northern West Bank.

Although extremely worrying for the livelihood and health impact on the affected tens of thousands of Palestinians, this comes to little surprise. 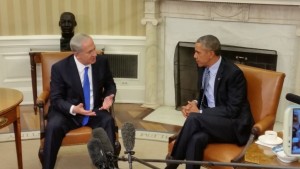 Since it occupied the West Bank in 1967, Israel has laid hands on Palestinian water resources through discriminatory water-sharing agreements that prevented Palestinians from maintaining or developing their water infrastructure through its illegal planning and permit regime. As a result, thousands of Palestinians are unable to access sufficient water supplies and became water-dependent on Israel.

By building on the myth of a water-scarce region – Ramallah has more rainfall than London – Israel has deliberately denied Palestinians control over their water resources and successfully set the ground for water domination, granting itself a further tool to exercise its hegemony over the occupied population and territory.

Palestinian water resources in the West Bank wouldn’t be scarce – they include the Jordan River, running all along the eastern border of the West Bank, and the Mountain Aquifer underlying the West Bank and Israel. Both water resources are transboundary – meaning that, by international law, they should be shared in an equitable and reasonable manner by Israel and Palestine.

Yet, since Israel took over the West Bank in 1967, Israel has remained in near full control over Palestinian water resources in the West Bank.

Israel fully prevents Palestinians from accessing the Jordan River and using its water. As for the Mountain Aquifer, the 1995 Oslo II interim agreement – which also defined the water-sharing arrangements between Palestine and Israel – came to consolidate the Israeli control that had been in place since 1967.

Israel was granted access to over 71 percent of the aquifer water, while Palestinians were only granted 17 percent. While the agreement was supposed to last five years only, 20 years later, it is still in place.

While the Palestinian population of the West Bank has almost doubled since, allocations have remained capped at 1995 levels. Today, Palestinians have access to less water than they were granted by the already-inequitable Oslo agreements: 13 percent, with Israel abstracting the remaining 87.

Indeed, as pointed out by the World Bank in its 2009 report about the water sector in Palestine, due to the dual Israeli permit regime, Palestinians have been unable to maintain and develop their water infrastructure.

In Palestinian wells where the water table has dropped, for instance, the Israeli restrictions on drilling, deepening and rehabilitation have made the wells un-usable and Palestinian water abstraction levels decline.

On the one hand, Palestinian water projects all over the West Bank need an approval by the Joint Water Committee (JWC), where Israel has a de facto veto power. Only 56 percent of Palestinian projects regarding water and sanitation were granted permits by the JWC (against a near 100 percent approval rate for the Israeli projects), and only one-third of those could actually be implemented.

Concerned by the asymmetry in the JWC functioning, Palestinians have refused to sit in the committee since 2010.

In addition to the JWC approval, all projects in Area C also require a permit by the Israeli Civil Administration (ICA), which are notoriously difficult to obtain. As reported by the United Nations Office for the Coordination of Humanitarian Affairs (OCHA), the ICA has refused between 2010 and 2014 98.5 percent of the Palestinian building permit applications for Area C projects.

Over 50 water and sanitation structures have been demolished by Israel since the beginning of 2016 already (more than in the entire 2015) on grounds that they were lacking the Israeli permits.

The lack of water and other basic services resulting from Israeli policies has created a coercive environment that often leaves Palestinians with no choice but to leave their communities in Area C, allowing Israel’s land takeover and further expansion of its settlements.

But as recent events have shown, Areas A and B are not safe havens either. Due to the lack of sufficient water resources available, Palestine heavily depends on water bought from Mekorot (18.5 percent in 2014). Ironically, this is water that Israel takes from the rightful Palestinian share – which they are denied – before selling it back to them.

A map showing Israeli settlements in the Palestinian Territories.

This has granted Israel further control over Palestinian access to water. As soon as water demand increases in the hot spring and summer months, supplies to settlements are privileged over Palestinian areas in the West Bank.

Every year, water supply to Palestinian towns and villages is cut off for days – if not weeks – during which Palestinians are forced to buy trucked water at five times the price of network water – as well as reduce their already low consumption.

Water consumption figures are telling: While Israelis have access to around 240 litres of water per person per day, and settlers over 300, Palestinians in the West Bank are left with 73 litres – well below the World Health Organization’s minimum standard of 100.

OCHA report that in Area C, where 180 Palestinian communities are not connected to the water network and 122 have a connection with no or irregular supply as a result of Israeli restrictions, water consumption can drop to 20 litres of water per person per day as people have to buy expensive trucked water.

Here, vulnerable households spend up to one-fifth of their salary on water.

Israel, as the occupying power has an obligation under international humanitarian law to ensure the dignity and wellbeing of the population under its control.

This includes obligations regarding the provision of and access to humanitarian relief and basic services, including water and sanitation.

Not only is Israel failing to provide for such basic needs. Its discriminatory water policies also prove that Israel is using water as a tool to dominate Palestinians, exercise its power, and punish an entire population by deliberately depriving its inhabitants the most basic of rights.

Camilla Corradin is advocating for Palestinian water rights with the EWASH NGOs coalition.