Exclusive: Democratic “super-delegates” – hundreds of party insiders – tilted the presidential race to Hillary Clinton though not chosen by voters, an undemocratic idea that was never intended, says Spencer Oliver who was there at the creation.

The issue of the Democratic Party’s “super-delegates” threatens to divide the Democratic Party at the Philadelphia convention as Sen. Bernie Sanders argues that the automatic vote given these party leaders made the race undemocratic because they did not compete in the primaries and caucuses and broke heavily and early in favor of Hillary Clinton.

And Sanders has a point. I was there at the creation of this party feature and I can attest that the idea of “super-delegates” making up around 15 percent of the voting delegates – and thus holding a powerful influence over the selection process – was never what was intended. 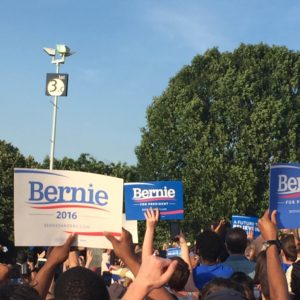 The original thinking was that a relative handful of state party chairs who had to remain neutral while setting up the primaries and caucuses would still get to go to the conventions. However, the numbers of “super-delegates” kept expanding and expanding as other party leaders lobbied to be included among those not having to compete in the delegate-selection process.

The “super-delegate” system was born in the wake of Democratic Party efforts after the 1968 convention to make the presidential selection process more open and democratic. I was involved in the work of all the reform commissions as the administrative assistant to Democratic National Committee Chair in 1966, later as President of the National Young Democrats, and subsequently as the founding Executive Director of the Association of State Democratic Chairs.

Named for their various leaders, these reform efforts were called the Wagner, McGovern, Fraser, O’Hara and Sanford Commissions, which made their reform recommendations to the DNC. All were tasked with making our party more open, more transparent, more inclusive, more democratic, and ultimately more successful in attracting the broad support of America’s diverse population. In other words, the idea was to put more power in the hands of rank-and-file Democrats.

This represented a major reform from the 1960s when party bosses like Carmine DeSapio in New York, powerful Governors like David Lawrence in Pennsylvania and Mike DiSalle in Ohio, and legendary Mayors like Richard Daley in Chicago dominated the Democratic conventions and had an outsized role in picking the Democratic presidential nominee.

The reform commissions were a response to that unpopular and highly criticized system. The Mississippi Freedom Party at the Atlantic City convention in 1964 and the anti-war protesters in Chicago in 1968 made the reform inevitable and certainly necessary.

The reforms brought American citizens much more extensively into the process of choosing the Democratic Party’s standard-bearer. The reforms also required State Democratic Chairs to be neutral as they organized their states’ primary and caucus systems. However, that meant the state chairs could not be elected to attend the party conventions as delegates committed to one candidate or the other.

So, the State Democratic Chairs proposed the idea of so-called “super-delegates” in the early 1970s, arguing that they should be automatic delegates because the reforms called for by the Wagner Commission and the DNC would otherwise exclude them from participation in the conventions. The DNC bought that argument. After all, they would be a relatively small number of delegates.

But then the governors wanted the same privilege, followed by congressional leaders and then the DNC members themselves. This expanding group now constitutes nearly 30 percent of the 2,383 delegates needed for nomination, significantly diluting the strength of the pledged delegates elected in primaries and caucuses.

Along the way, the “super-delegates” seem to have forgotten why they are there — and how they got there — in the first place.

On Feb. 12, 2016, when DNC chair Debbie Wasserman Schultz was asked on CNN whether the existence of “super-delegates” might give the impression to regular voters that the process was rigged, she answered: “Unpledged delegates exist really to make sure that party leaders and elected officials don’t have to be in a position where they are running against grass-roots activists. We … want to give every opportunity to grass-roots activists and diverse committed Democrats to be able to participate, attend and be a delegate at the convention. And so we separate out those unpledged delegates to make sure that there isn’t competition between them.”

But “super-delegates” really were an unintended outgrowth of the reform process and indeed fly in the face of the reform goals, which were to extend to the average voter the power to select the party’s nominee. By contrast, the “super-delegates” are given the power to vote for the nominee simply because they occupy – or in some cases occupied years ago – positions that entitle them to vote without having to earn that privilege by participating in the primaries or caucuses. Is this fair? Is this democratic?

I am reminded of my past experience as secretary general of the Organization for Security and Cooperation in Europe’s parliamentary assembly in organizing the election observation mission to the first elections in Kazakhstan in 1994 when we were trying to encourage the former Soviet republics to transition toward democracy.

The Kazakhs were trying to move in that direction, but they adopted an election law that allowed the President to appoint 25 percent of the parliament. For that reason, we declared that the election was clearly unfair. The Kazakhs were mortified and internationally embarrassed. They later changed the law and – although democracy has not yet blossomed in that part of the world – such non-electoral legislative appointments have disappeared throughout the area. Yet, a similar rule exists in the Democratic Party of the United States of America.

I am not arguing that our party leaders should not attend the Philadelphia convention. They should be on the floor, entitled to speak, to lobby, to advocate and to impart their wisdom and experience to their fellow delegates. They have certainly earned that right. But they should not have the right to vote for the Democratic Party’s choice for president and vice president.

That “super-delegates” would hold such power over the selection process was never the intent of the party’s reforms and indeed goes against the goals of those reforms, which have largely succeeded in drawing citizens more directly into the process while also broadening the Democratic Party’s tent to include minorities, women, unions, young people, LGBT – just about every component needed for electoral victory.

Spencer Oliver recently retired as Secretary General of the OSCE Parliamentary Assembly. He previously served for eight years as a senior official at the DNC. And for more than twenty years on Capitol Hill, concluding as Chief Counsel of the House Foreign Affairs Committee.

35 comments for “The Democrats’ ‘Super-Delegate’ Mistake”