As Bernie Sanders ponders his next step, he could fall in line behind the Clinton bandwagon or break free and take his critique of economic injustice to a global stage, starting with a challenge to Brazil’s pro-corruption coup, writes Sam Husseini.

This past week, many eulogists lauded Muhammad Ali, noting that Ali’s greatest contribution was not being a talented athlete and heavyweight champion. After all, there are many prominent sports figures, but they don’t play the historic role that Ali did.

Ali’s true greatness came because at the height of his fame and powers, he challenged an oppressive system: He refused to go into the Army during the Vietnam War. It cost him a great deal of money and popularity (at the time) – but tremendously helped the world and resulted in his canonization as a global hero. 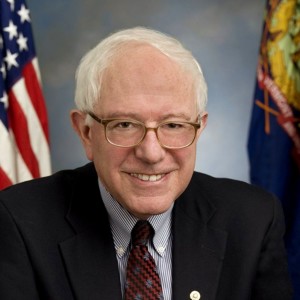 This was fostered by establishment media in Brazil, as for-profit media often plays the role of kingmaker in ways stark and subtle in every country, including the U.S., as we’ve seen in this current election.  Rousseff’s cabinet was diverse, both in terms of gender and ethnically. The new government is all white males.

Rousseff was set to investigate corruption, including in the Brazilian Senate, and the coup was planned by corrupt senators. Indeed, the anticorruption minister in the new coup government was recently forced to resign when a tape was leaked about how he was trying to cover up corruption. All this and more is being done with U.S. government’s silence and tacit support.

Certainly, Sanders has challenged the power of Wall Street and America’s “billionaire class” from within the Democratic Party. But, with the media placing a mantle of celebrity around Hillary Clinton (and Donald Trump for that matter), they are the likely nominees.

But perhaps, for all the good that Sanders did, he might feel a measure of remorse for what he didn’t do: He hasn’t spoken seriously or consistently about the U.S. government’s role in the world. Even in his discussions of inequality, he’s confined himself to inequality inside the U.S. But what about global poverty?

Has Sanders been moved by slums in Latin America? Refugee camps in the Mideast? Stark poverty in Africa? Sweatshops in Asia? He went to a Vatican conference where Bolivian President Evo Morales also spoke. They chatted. What can be built from that? How can progressive leaders work together globally? How can movements cross boundaries? Are not movements weakened when they confine themselves to national barriers?

Ali took himself out of his comfort zone. He focused not just on getting a seat on a bus for himself, and not just for African-Americans, but spoke against the Vietnam War (and made a point of holding high-profile fights in Zaire – “the rumble in the jungle” – and the Philippines – “the thrilla in Manila.” By contrast, Sanders has not transcended his domestic critique, transforming it into a fully formed global analysis.

As Ben Jealous has said – in praising the Vermont senator’s consistency – Sanders “has been giving the same damn speech for 50 years.” Well, that’s not necessarily or entirely a good thing. There are people living in horrible conditions around the world, in large part because of economic, political and military policies determined in marble-façade buildings in Washington, D.C. Sanders has been remarkably mute about that.

The power of the Establishment rests in large part on its global interconnections. But progressive forces have been reluctant to build and wield similar power. Recall shortly before the invasion of Iraq, there were quasi-global protests against the war on Feb. 15, 2003. Just after that, the New York Times called the peace movement “the second super power.” Yes, that didn’t stop the war, but that was because there was only some global solidarity late in the day. The answer is more solidarity sooner.

And now, Sanders has mounted a campaign in all 50 states. It’s late in the day, but not too late for him to break down the wall that has kept him focused on domestic American issues and seriously engage the rest of the world. That should start with going to Brazil and meeting with Rousseff. By doing so, Sanders could help overturn the coup, providing a tremendous service to the people of Brazil and it would put the heat on the U.S. government regarding its behind-the-scenes machinations.

It would also highlight the fake feminism that surrounds the Clinton campaign. Do we want women in officialdom simply so that they can be as murderous and corrupt as men have been? Or do we want a different kind of politics that is inclusive in terms of gender, but that is based on solidarity and uplift rather than “I got mine”?

Clinton’s crimes on foreign policy constitute quite a rap sheet. In mildly criticizing her, Sanders has at best scratched the surface. From voting for the Iraq War to bombing Libya, from backing Israeli Prime Minister Benjamin Netanyahu’s repression of the Palestinian people to backing the Honduran coup which contributed to the killing of Berta Cáceres, Clinton has compiled a gruesome record which rarely is referenced or examined in detail.

Perhaps Sanders, struck by fear of Donald Trump, desperately wants to look away from Clinton’s history because to do otherwise might improve Trump’s electoral chances. But does Sanders want to be just another cog in the Clinton machine? Does he want to slip into the subservient roles of other past “insurgent” candidates, such as Howard Dean, Jesse Jackson and Dennis Kucinich.

They are now “sheepdogging,” in the phrase of black commentator Bruce Dixon, herding progressives into the camp of the Democratic Party establishment. That same fate, as  accessory to an increasingly pro-corporate Democratic Party, could now await Bernie Sanders.

The “consultants” and “advisers” whom he’s meeting with this weekend in Vermont are probably pushing Sanders to accept what bread crumbs he can get from Clinton & Co. After all, they are political professionals who have their careers to think about, and their careers are with the Democratic Party machine or some appendage of it.

But real power, real greatness, doesn’t come from accepting such a role. That’s why we remember the name Muhammad Ali and forget many, many others.

Sam Husseini is communications director for the Institute for Public Accuracy and founder of votepact.org, which urges left-right cooperation. Follow him on twitter: @samhusseini.