Village protesters have challenged South Korea’s construction of a new naval base on Jeju Island, known for its stunning Gureombi Rocks, but the navy is striking back with a punitive lawsuit designed to silence dissent, writes Ann Wright.

The South Korean Navy filed a civil lawsuit against 116 individual anti-base protesters and five groups including the Gangjeong Village Association demanding $3 million in compensation for alleged construction delays caused by protests over the past eight years. 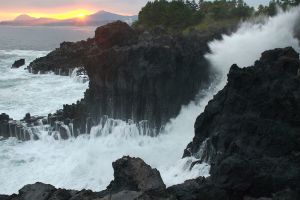 In one of the longest, strongest protests against more military bases around the world, the villagers of Gangjeong, Jeju Island, South Korea, have achieved international recognition of their spiritual and corporal resistance and persistence in trying to preserve unique natural features of their community, the Gureombi Rocks.

Samsung, the primary contractor for the $1 billion project, precipitated the action by filing a lawsuit against the government for slowdown of work caused by the protests because Samsung’s profit margin was impacted by the protests.

Villagers are very angry about the lawsuit that if upheld would bankrupt everyone named. To show its displeasure to the Navy, the village moved its City Hall to a tent on the main road across from the entrance to the base. The Vice-Mayor holds city meetings in the tent and sleeps there.

Lawyers for the activists wrote that the navy’s lawsuit is “an unjustified declaration of war against the people. When the reckless development of the state and large construction companies threaten the right of citizens to a peaceful existence, the right of citizens to oppose this must be guaranteed as their natural and constitutional right since sovereignty rests with the people. To condemn this action as illegal is to delegitimize the foundation of democracy.” 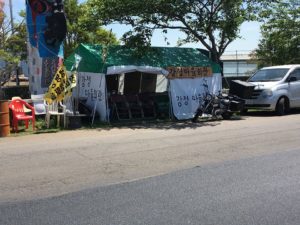 Gangjeong Village moved its City Hall to a tent across from the Navy base in protest. (Photo by Ann Wright)

Every morning for the past eight years, at 7 a.m., rain, snow or good weather, Gangjeong Village activists reflect through 100 bows to the universe on their lives of activism for a peaceful world while confronting the war machine at one of its gates.

The thoughts represented in 100 bows span all religions and spiritual traditions.  A few of the thoughts include:

1. While holding in my heart that truth gives freedom to life I make my first bow.

7. As I hold in my heart that possessions create other possessions and wars only give birth to other wars and cannot solve problems I make my seventh bow.

12. As I hold in my heart that the way to life-peace is to accept the world’s pain as my own pain I make my twelfth bow.

55. As I resolve to let go of chauvinistic nationalism which makes other countries insecure, I make my fifty fifth bow. 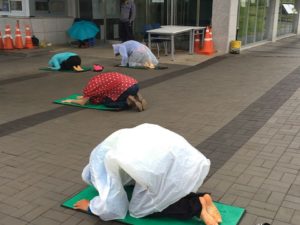 56. As I resolve to let go of the superiority of my religion which makes other faiths insecure, I make my fifty sixth bow.

72. As I resolve to respect all lives without any prejudice and bias, I make seventy second bow.

77. As I remember that the beginning of violence starts from my opinionated ideas and hatred towards others because of differences, I make my seventy seventh bow.

100. As I pray that the light that I kindle leads all sentient beings to live in peace and happiness, I make my one hundredth bow. 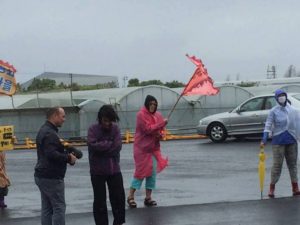 The southern coast of Jeju Island is known for its strong winds. (Photo by Ann Wright)

One day I was at Gangjeong Village recently we endured a cold wind and rain for the noon time “Human Chain” at the entrance of the Naval Base at Gangjeong Village. The winds were fierce — the southern coast is known for its very strong winds and one of the reasons why many were perplexed that the naval base was proposed for an area of the island where high winds and high seas are most frequent around the island.

Other days I’ve been here, the weather was nice for the singing and dancing in the roadway, reminding the South Korean Navy that the opposition to the construction of the naval base has not ended, despite the construction being complete.

This great public spirit continues to challenge the navy base and militarism with the noon dance. For those who have visited Gangjeong, both events and the sounds remain with us — as we remember that each day dedicated activists in Gangjeong Village continue the struggle against militarism. 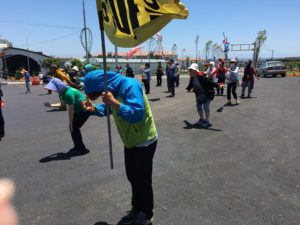 The noon dance at the entrance of the Naval Base at Gangjeong Village is done to remind the South Korean Navy that the opposition to the construction of the naval base has not ended. (Photo by Ann Wright)

While I was in Gangjeong Village, the South Korean Navy had “Navy Week on Jeju Island.”  Navy weeks are designed as a public relations event to get favorable public opinion.

Most activists would not have been allowed on the navy base even if they had wanted to go — which they did not want to do. I wanted to see where the massive amount of concrete poured into the area had gone — so I produced my passport and I and another recent arrival were passed onto the base. We saw Aegis missile destroyer ships, helicopters, landing craft and demonstrations of martial arts.

But the most important thing we saw was what we think is the only remaining part of Gureombi Rock. Behind the first building on the left side of the main road past the entrance gate, is a small lake with one side of what appears to be a very small piece of the Gureombi Rock. The other side of the lake is composed of rock fill, but the northern side seems to be original rock. 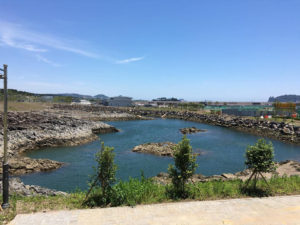 The coastline surrounding Gangjeong Village consisted of one contiguous volcanic rock called Gureombi which was a 1.2 kilometer-long rock formed by lava flowing into the sea and rocks rising from the seabed. The estuary informed in this area was Jeju Island’s only rocky wetland and acted as home to several endangered species and soft coral reefs.

In December 2009, Jeju Island Governor Kim Tae-hwan nullified the ACA designation to proceed with the naval base construction. The Jeju Branch of the Korean Federation of Environmental Movements have criticized the Navy’s Environmental Impact Assessment noting that several endangered species are absent from the report.

During its recent archeological excavation of the Gangjeong coastal area, the Jeju Cultural Heritage Research Institute discovered artifacts dating back to 4-2 B.C.E. inside the naval base construction zone. According to the director of the Korean Cultural Heritage Policy Research Institute only 10 – 20 percent of the site was dug up during construction violating the cultural properties protection law.

At a talk that I gave two days later, many from the village discussed how to ensure that the tiny portion of Gureombi Rock remains intact and continues its cultural and spiritual ties to Gangjeong Village.

I mentioned that in some military bases in the United States, there are plaques to remind us of those who lived there before the U.S. government took over their lands. And even in the family housing area on the naval base, there are two murals that represent the indigenous peoples.

We hope that some type of mural will be created on the naval base depicting the importance of Gureombi Rocks so that hopefully the remaining rocks will not be blown up or concreted over. 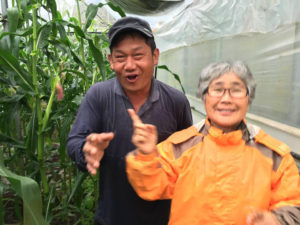 How do anti-war, peace activists in Gangjeong village support themselves? Some work in the Peace Farm Cooperative. Customers buy produce online from the Peace Cooperative.

One rainy morning Joan of Ark took us to two peace cooperative farms. The first was in the protected, covered greenhouse where they grow corn and beans. I asked how big the greenhouse was and she said 800 pyeongs — apparently a word indicating how big a grave should be — the length of a person’s body. An interesting way of measuring!

Then we went out of the village to their second farm in a … cemetery — or actually next to a cemetery where they grow corn and peanuts. The grass in the cemetery is allowed to grow over the gravestones and once a year a family may come to clear out the area around the gravestone. After 30 years, the family may have the ashes removed to another place.

Currie, an activist from the U.S., mentioned that in the U.S., some people want to be buried in a natural area where grass and weeds are allowed to grow, not in a formal cemetery. 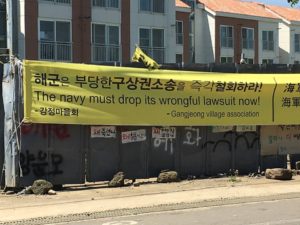 A banner in Gangjeong Village. (Photo by Ann Wright)

The St. Francis Peace Center in Gangjeong Village has a remarkable history. In the 1970s, Father Mun was jailed for his protests during the military dictatorship and 30 years later he was awarded compensation for wrongful arrest and years in jail. With the compensation money, he purchased land overlooking the pale where the naval base was to be constructed.

The Bishop of Jeju Island decided to help build a peace center on the land — and now a wonderful place for those working for peace and social justice is in Gangjeong Village. It is a beautiful building with a fourth floor viewing area so the eyes of the peace house can alert the community to what the war machine is doing.

Ann Wright is a 29 veteran of the US Army/Army Reserves and retired as a Colonel.  She was a US diplomat for 16 years and served in US Embassies in Nicaragua, Grenada, Somalia, Uzbekistan, Kyrgyzstan, Sierra Leone, Micronesia, Afghanistan and Mongolia.  She resigned from the US government in March, 2003 in opposition to the war on Iraq. She is the co-author of Dissent: Voices of Conscience.