The death of boxing great Muhammad Ali touched many people, especially those fortunate enough to have known him as a brash and brave young man who transformed sports and challenged the Vietnam War, as Mollie Dickenson recalls.

I awoke the other day to learn that Muhammad Ali had died which saddened both me and my husband, Jim Dickenson. In February 1964, Jim, writing for The National Observer, covered Ali’s first fight with Sonny Liston in Miami while I listened to it on the radio.

I was rooting for Ali (then Cassius Clay) because he was so entertaining, besides being beautiful. He was being highly criticized then for being an “uppity” you know what. Jim was then in his two-year stint as a sports reporter – an agreement he had with the Observer with the understanding that he then could cover politics after that. 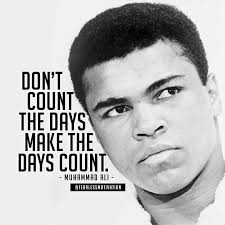 Muhammad Ali, pictured with one of his famous quotes.

One year later, I was in Boston with Jim who was covering Ali again before his second fight with Liston later in Maine. We walked out into the town with Ali and Angelo Dundee for a little training walk and he was just a joyful man. He told me he got his strength and inspiration from the stars, the heavens, the cosmos. All in good fun.

At the gym later where he weighed in, a British reporter said to me, aghast, “Why the man isn’t even a Christian!” Ali was being his usual mouthy adorable self. “Float like a butterfly. Sting like a bee.” Hard to believe the attitudes of those days.

That night, Jim was in bed with a sore throat so I had dinner at the hotel cafeteria counter and sat next to Ali’s trainer Angelo Dundee who told me that he always told Ali to avoid being hit, to dance backwards and of course Ali danced constantly in the ring and indeed always was moving back.

Ali had an appendectomy soon after that and the fight was rescheduled for May. It was shown on closed-circuit TV at the Armory in Washington DC. We were just in time for the opening bell but no sooner had we sat down than Ali KO’d Liston and the fight was over. It was so fast that the TV had to show it over and over so people wouldn’t think Liston had taken a dive.

My next and last encounter with Ali was at a benefit at the Pension Building in Washington. While Ali was still at the front of the room, I went up to him, thanked him and told him how much I appreciated his stance against the Vietnam War. He was so lovely about it, listened carefully and thanked me. My hero! A beautiful, beautiful man.

Mollie Dickenson is author of Thumbs Up, a biography of Jim Brady.