Night and day, U.S. “pilots” sit in cushioned chairs near Las Vegas, commanding drones on the other side of the planet, tracking and killing people, what retired Col. Ann Wright and other activists call a war crime, writes Dennis J Bernstein.

Leading the charge against the U.S. “drone war” — now a key part of the Pentagon’s forward fighting strategy — is an unlikely individual, Colonel Ann Wright, who spent most of her adult life as a diplomat, working in the U.S. State Department.

Colonel Wright reopened the U.S. embassy in Kabul in 2001. But in 2003 she took an action that would transform her life. She resigned her position in opposition to the then-impending U.S. invasion of Iraq. Since then, she has become a full time global peace activist.

She also is one of the most vocal and convincing opponents of U.S. drone policy, a collection of activists who call themselves Creechers because – for seven years – they have marched on Creech Air Force Base, also known as Creech Drone Base, in the Nevada Desert, just 60 miles outside of Las Vegas, Nevada. Creech is a key part of the extensive and expanding U.S. drone war operation, which launches lethal drone strikes half a world away. 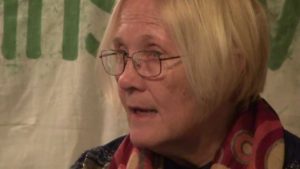 The protests are spearheaded by Code Pink and are always peaceful, but militant and intense. They consider the U.S. drone war, supervised directly by President Barack Obama, as an ongoing war crime. They do not consider this hyperbole. They say it is a clear-cut case of the slaughter of hundreds of innocent civilians, with many fleeing women and children among the victims.

We caught up with Colonel Wright on her way to an anti-drone symposium at the University of Nevada, Las Vegas Law School entitled “Inside Drone Warfare: Perspectives of Whistleblowers, Families of Drone Victims and Their Lawyers.” The symposium would include people who were formally a part of the United States Drone Program. Among them, Christopher Aaron,  a former counter-terrorism officer for the CIA’s drone program, and Shawn Westmoreland, who was with the U.S. Air Force’s drone program.

DENNIS BERNSTEIN:  Set the Scene.  As a former diplomat, somebody who spent a good deal of time in the military, what brings you and Code Pink to Creech for the seventh year in row? What’s at the core for you?

COLONEL ANN WRIGHT:  Well, it’s this weapons system. The weapon system that the president of the United States is using as kind of his personal assassination tool.

He has become the prosecutor, the judge, the jury, and the executioner of people around the world, who the United States intelligence agencies have identified as people who are doing something that is against U.S. interests. And we certainly know that our intelligence community is not infallible, and they’ve made lots of mistakes.

And we’ve talked with the families of some of the victims of these drone strikes and we know, for a fact, they are not militants, not all of them. Some of them, maybe. But there is a huge number of people that are called ‘collateral damage’ by our country, as they kill them.

DB:  So, just to keep a human face on this: Tell us more precisely about one or two of the people who you met during your global journey against US Drone use.

AW:  Yes, well, we’ve had lengthy talks with a man named Fizel from Yemen, whose family was killed. In fact, you can probably hear a drone overhead now. I don’t know if you hear it in the background.

AW:  You don’t hear these things so much. But they’re flying very low here at Creech Drone Base because the trainee pilots are practicing piloting them. And they come in for “touch and goes,” so you can hear them here, whereas in Pakistan, Afghanistan and other places, they are usually flying quite high.

You may be able to hear a little buzz, but you don’t hear it like you do here. And then the next thing that you hear is a Hellfire missile being fired, or exploding as it hits a family, a wedding party in the case of Fizel from Yemen. And we’ve had him and some other members of his family come to the United States to speak about what happened, about how this mistake could happen to a wedding party.

You know, supposedly, how these drones have very accurate cameras, cameras that can hone in very minutely into people and objects. And how they can make the mistake of identifying a wedding party as a group of militants that are going to be doing something harmful to U.S. interests–this is something that mystifies us. And why the president of the United States continues to believe these [kill] lists that are given to him Tuesdays, Terror Tuesday, by our 17 intelligence agencies.  It mystifies me.

DB: Tell me more about the fatal wedding. Who was getting married? Are there other stories like this?

AW:  It was one of Fizel’s sons that was getting married. We’ve talked to families that were in Pakistan.

His cousin and an uncle had been killed. He was 16 years old, and two days later, when he went back to Waziristan, the car that he was riding in was targeted by the United States, and he and another cousin were killed.

Here’s these 16 year old kids who had just testified before international journalists about what had happened and then the United States either purposefully killed him because he told what happened to his family, or, it was another mistake of the intelligence agency.

So they’ve gotten the wrong people. They’ve gotten people that have nothing to do with violence in their home country, or violence against the United States. They’ve done this all too many times.

When you start doing that…and as a military person…I mean you always have to watch out for weapon systems that have blowback potential.  And I think we can say that’s happening with the drones.

DB:  Before I let you go, I really want to tap into your military expertise, and where that comes in, in terms of the work you do based on your conscience. I know you’ve had an impressive military career, and as a diplomat.

Please give your perspective on what this kind of a warfare looks like. What this means to the culture. What this does to society, to the people who carry out these Drone strikes. Is there something specific about this kind of warfare that really puts you to the edge?

AW:  Well, I think it’s that our government is always saying that its surveillance programs–their invasion of our own privacy by surveillance through cell phones or through drone actions here in the United States–how precise it is, you know, “very few violations of constitutional rights.”

And yet when you look at what we are doing in other countries where, “Oh, it’s very precise and we’re only killing those people that we know have done something wrong. But we can’t tell you exactly what they did wrong, and we can’t tell you how many other people get killed as we killed them.”

Now it is not one of the priorities of the United States that you bring a person to justice to let a neutral court try whether or not the evidence that is presented is sufficient to convict them of whatever charge it is. What we’re doing is using charges […] or allegations brought by the intelligence community of what this person possibly did and we don’t have a neutral advisor.

We don’t seem to have anyone that adjudicates the evidence. We just have the president of the United States who now has taken the authority to make that decision on whatever is written on this little piece of paper, on a Tuesday, to determine whether a person lives or dies, and along with that person anyone else that might be in that circle.

So it’s very imprecise […] and it in no way correlates to our own judicial look at what humanity is supposed to be doing to each other. There’s no opportunity for that person to defend themselves, to offer evidence to say “Hey, you got the wrong person. Here’s the evidence that shows that I didn’t do anything that you are alleging.” They don’t have that chance at all. They are just blown away.

And people that are in the car with them, are in the house with them, the kids, the relatives, the mothers, the grandfathers are disappeared because our intelligence agency, which is not infallible, has made a mistake. So, those are things that concern me, as a former military, retired military, former State Department person.

We are using a weapons system […] that doesn’t equate at all to what we’ve always thought that our system was supposed to be doing. Which is to give everybody a chance to refute any charges the government comes up with.

DB: I’m wondering if this kind of piloting, if this kind of “remote control murder” by drones, as it has been labeled, has special impact on the people, especially the pilots […] when they find out they just murdered, wiped out, a wedding party of innocents. I’m wondering if this has a special impact on the psyche, if there’s a struggle here, going on at that level?

AW:  I think there is. And we have heard from many pilots, and the two that will be speaking tonight were not actually pilots but they were a part of the whole process. One of them was a communications technician that put the communications links up so the drone pilots could be in communication with the incident analyst that might be a continent away.

But we know that the attrition rate on people associated with the drone program is very high. And that indicates that there’s a moral component to this that people are evaluating in their own minds and consciousness and saying, “I don’t want to do this anymore.”

DB: Finally, if you had sixty seconds with the President, what do you think you’d say?

AW:  I would say, as a military officer with 29 years’ experience, and a U.S. diplomat, that we have a weapons system that is causing blowback to the interests of the United States. Using the assassin program is making the United States more insecure rather than secure. That it is harming our national security, not enhancing it. And that we should stop this drone program. And he, as president of the United States, should stop being the sign-off person on this, because, in my opinion, it’s illegal and he could be put up on war crimes charges. That’s what I would tell him.

Dennis J Bernstein is a host of Flashpoints on the Pacifica radio network and the author of Special Ed: Voices from a Hidden Classroom.  You can access the audio archives at  www.flashpoints.net.

25 comments for “Calling Out Drone War as a War Crime”